New Ka-52K will be equipped with folding blades 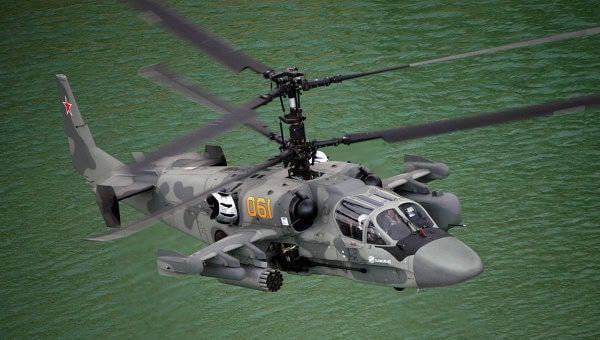 The new Ka-52K ship-based helicopter, which creates the Russian Helicopters holding, will have stable anti-corrosion treatment, folding blades and wing consoles, the press service of the holding said on Wednesday.


MBMC-2013, which takes place every two years, will start in St. Petersburg on Wednesday, July 3, and last until July July. The exposition and exhibition section will be located in four pavilions of the Lenexpo exhibition complex with a total area of ​​over 7 thousand square meters, in open spaces and in the waters of the Gulf of Finland, as well as at the berths of the Naval Station.

"Developing a line of traditional for fleet naval helicopters, the Russian Helicopters holding is preparing new programs. So, the Ka-52 Alligator helicopter will be presented at the IMDS, on the basis of which a new modification of the Ka-52K is created in the interests of the Russian Navy. It is planned that specifically for basing on ships, the Ka-52K will have stable anti-corrosion treatment, folding blades and wing consoles and other technical solutions, and a number of helicopter systems will be adapted for use in the fleet, "the report said.

It is noted that the maritime version of the "Alligator" may be interesting for countries that are actively developing their naval forces. In the Russian Navy, this helicopter, first of all, is intended for possible deployment on universal landing craft of the Mistral type.

In addition, together with Rosoboronexport OJSC, the Russian Helicopters holding will acquaint potential customers of naval helicopters with the unique capabilities of the Ka-31. This helicopter is designed to protect the formations of warships operating outside the zone of action of the coastal radar and AWACS planes from air strikes. Ka-31 provides detection of air targets (including low-altitude against the background of land or sea), as well as surface targets and automatic transmission of information about them to land and ship control stations or air defense systems.

Ctrl Enter
Noticed oshЫbku Highlight text and press. Ctrl + Enter
We are
Russian Helicopters Holding will present at the Army-2015 Forum new models of military helicopters: the marine version of the Alligator helicopter, the Night Hunter with dual control, the Mi-8AMTSH-B and light Ka-226TThe action “Military service under the contract is your choice!” In Rostov-on-Don: future contract servicemen, exhibitions and “Russian Knights”
Military Reviewin Yandex News
Military Reviewin Google News
82 comments
Information
Dear reader, to leave comments on the publication, you must to register.