July 5 2013
66
The power of the Islamist "Brothers" in Egypt has come to an end. In the night from Wednesday to Thursday, the army dismissed Mohammed Mursi from the presidency and announced the suspension of the constitution adopted with him. The “spring” course of events, whatever one may say, was provoked by Mursi himself and his entourage. Instead of the promised democracy, he brought citizens obvious Islamism and autocracy. And, like other fanatical Islamists, he persisted in his delusions to the end. It should be noted, Comrade Mubarak, whom the “Arab Spring” dared in 2011, left the post voluntarily. 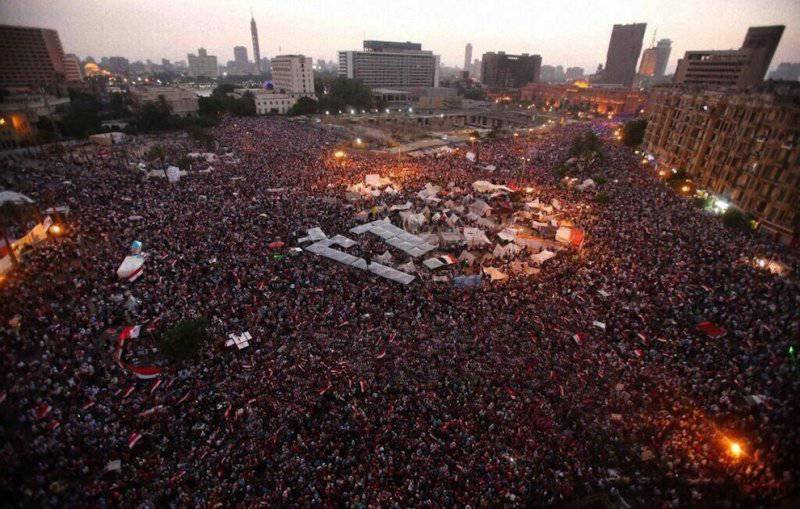 I remember last October to one note on "VO" o Mursi received a comment. The reader reproached me, that is, the author of the review, with excessive bias. The commentator expressed his point of view, while calling Mursi the Islamist "moderate." Why, they say, a note? Not to give birth to another article the next day, where to inform the world: “You see, what did the“ Arab spring ”inspired by America lead to?”

Well, here it is time to give birth to her.

Mursi from the very beginning did not seem to me "moderate." The transient career of the new “Pharaoh”, promoted from the Muslim Brotherhood, whose violent constitutional (or rather, unconstitutional) activity was extensively covered by “VO”, showed what this political character was aiming for - by the way, in 2012, it was really approved by Washington, who had anointed his kingdom

Since 4 July 2013, Mursi is no longer President, but Egypt is temporarily headed by the President of the Constitutional Court, Adly Mansur. And now it is possible to declare with one hundred percent conviction: “You see, what the“ Arab spring ”inspired by America led to!”

Mohammed Mursi was unable to even leave as comrade Mubarak, who ruled Egypt for three decades, did. Moreover, the Islamist loser attributed to Mubarak all his failures, and at the same time the misfortunes of the Egyptian people. The “past regime” was to blame for everything!

On July 3, the Egyptian president, now former, refused to leave his post and called on the army to return to his duties, reported ITAR-TASS. In a televised address to the nation, he said: "There are laws that guarantee my legitimacy and stay in office."

“I have no choice but to continue to fulfill my duties,” the president added. He further emphasized: “I want to say to all citizens of the country, including the army and the police, there is no alternative to the rule of law; stories democratically elected president. ”

Then the speaker confirmed that he would fulfill his duties until the end: “If my blood needs my blood to save the legitimate government, then I am ready to pay this price.”

"Lenta.ru"referring to Reuters, she wrote that the unrest at Cairo University began just after Mursi had made an 45-minute appeal, in which she categorically refused to resign.

His speech was met with indignation. Opposition spokesman Khaled Dowd called the president’s words a declaration of civil war.

At least 23 people died and around 400 was injured during the unrest in Egypt. The largest demonstrations were held in Cairo, reported "Vesti".

Abdelfattah al-Sisi - the supreme commander, he is the Minister of Defense of Egypt, - said that "the military is ready to sacrifice themselves in the name of Egypt and its people in the fight against terrorists, extremists and ignoramuses." These words are present on the page of the armed forces of Egypt on the Facebook network, correspondent RIA "News" Nadim Zuaui. It is easy to understand who the military comrades called "ignoramuses" and "extremists."

For the military, it’s better to die than to see how “the Egyptian people are intimidated,” the statement said.

The leadership of the Egyptian armed forces made a plan for the transfer of power. As specified "Lenta.ru" With reference to the Reuters news agency, which has sources in the Defense Ministry, the army intended to dissolve a parliament dominated by supporters of an Islamist president and suspend the constitution. The leadership of the state should go to the transitional council, which will prepare amendments to the constitution and set a date for the election.

Mursi? He had no place in the plan.

On the eve of the coup, Hosni Mubarak nobly urged Mursi to follow his example, wrote "Lenta.ru" with reference to the television channel Al-Arabiya.

According to Mubarak, the scale of the protests against Mursi far exceeds what he himself had to face in 2011, so “in the name of the people of Egypt” he should leave his post. Mubarak recalled that two years earlier he had decided to give up power in order to prevent bloodshed.

Mursi, of course, did not obey. This act was quite in the spirit of all that he had done in Egypt: from writing the Pharaonic-Sharia constitution, dictated by the Muslim Brotherhood, to creating a new economic crisis in the country, in order to overcome which the Islamist president had to urgently sign up for a reception IMF. This is - not to mention the victims, which were accompanied by constant mass protests against the policies of the smug Pharaoh.

The deadline for the 48-hour ultimatum that Egyptian Defense Minister Abdel Fatah al-Sissi delivered on Monday to Mursi to resolve the political crisis expired Wednesday night. After the expiration of the time, Comrade Fattah al-Sissi announced the suspension of the constitution and the holding of early presidential elections.

“Our“ road map ”prescribes the suspension of the constitution, the swearing-in of the head of the Constitutional Court as the head of state, and the holding of early presidential elections,” he said. Interfax.

On Tahrir Square, this statement of the military was greeted with stormy glee. Mohammed ElBaradei, a prominent opposition spokesman in Egypt, said that the 2011 revolution had been “restarted.”

As for the Islamist who has been set aside, he finds the actions of the army a military coup. Now Mursi has moved his activities to Facebook. A statement by the presidential office on the official social networking site said: "I reject the statement of the military, which is a military coup." The representative of the Muslim Brotherhood, Jihad al-Haddad, also announced the coup.

However, we note, who will believe Mursi? He has already given one constitution to the country. She did not like the country. Moreover, the "coalition government" is not what the people are waiting for. People do not want to see Islamist in the presidential palace.

Despite the fact that Mursi managed to spoil relations even with Obama, the blame was powerful protests against the film “Innocence of Muslims”, whose members burned American flags, and threw an Islamist banner on the US embassy, ​​after which Obama decided to exclude Egypt from his “allies” Washington today objected to the non-democratic change of ruler in Cairo.

Early on the 4 of July, on the Independence Day of the USA, Barack Obama first of all declared that he was “deeply concerned” with the removal of Muhammad Mursi ( "Lenta.ru" with reference to "Reuters"). Mr. Obama, as if he had nothing to do in the morning, issued a written statement in which he expressed the hope that Egypt would return to civilian form of government and the government chosen during democratic elections as soon as possible. At the same time, the American president asked the Egyptian army not to arrest Mursi and his supporters, as well as to respect human rights. The President also made it clear that he had already instructed his intelligence agencies to assess the consequences of the resignation of Mursi and his subsequent influence on American policy.

The head of the Joint Chiefs of Staff of the United States, General Martin Dempsey, said that the consequences of the July 3 events could be terribly difficult for Egypt. “There are laws that determine how we should act in such situations,” he said.

According to these laws, assistance to a country whose government was overthrown during a military coup or decree should be terminated. But the United States annually allocates Egypt 5,1 billion. Dollars.

As transmits RBC With reference to Al-Jazeera, Adly Mansour, chairman of the Constitutional Court, was appointed interim head of Egypt. Congratulations to Mansuru already sent the King of Saudi Arabia.

Army representatives said that all their decisions were made after consultation with leaders of public and religious organizations.

In addition to the formation of a temporary cabinet, the Egyptian military is going to hold early presidential and parliamentary elections. Their preparation will deal with a special commission. A new political structure will be created in the country - the Committee on Reconciliation. It will consist of representatives of all parties and movements of Egypt. He will work with youth movements.

In a televised address, the head of the Egyptian army named measures aimed at resolving the political crisis. They are quoted "BBC":

The constitution has been suspended. The main law of the country itself will be reviewed by a specially created committee.

State administration is temporarily assigned to the head of the Supreme Constitutional Court.

A provisional government of technocrats will be appointed and early presidential elections will be held.

Any illegal actions will be harshly suppressed by the forces of law and order.

The media will begin to act limited censorship.

Earlier, the military brought armored vehicles to the streets of Cairo. The army, as they say, protects all citizens "without distinction."

"BBC" reports that retired Mursi and high-ranking members of the Muslim Brotherhood movement are banned from leaving the country.

Different media, citing various sources, write that the Muslim Brotherhood announced the arrest by the military Mursi. The arrest of this - home. The state television channel “The Party of Freedom and Justice” (the political wing of the Muslim Brotherhood) is supposedly disabled in Egypt. It is also known that the channel “Al-Jazeera” does not broadcast from Egypt. The latter is not at all surprising: Al-Jazeera supported the Islamist Mursi. There are reports of the arrest of producers and TV presenter. The Ministry of Internal Affairs of Egypt allegedly arrests the owners of religious TV channels and is searching for the top of the Brothers.

So, whatever M. Mursi says and whatever his associates say there, in Egypt the army was the true bearer of the people's will (you can do without the word “democracy”). Elections by no means always and not everywhere lead to the high office of those people who express the aspirations of the main masses. And if Mr. Obama on a holiday criticizes what happened in Egypt, although on the night from 11 to 12 in February, 2011 with H. Clinton welcomed the Egyptian “spring”, it means that in Egypt it went smoothly.

The reason for the White House’s opposite reaction to events of the same type was that Mubarak was a “dictator”, and Mursi, with all his quirks and minuses, was a “democratically” elected president, to implement the overseas destabilization doctrine very appropriate. If Egypt lived relatively well under Mubarak, it was almost absolutely bad under Mursi. When will the inhabitant of the Oval Office comprehend that the people do not like living badly?

Observed and commented on Oleg Chuvakin
- especially for topwar.ru
Ctrl Enter
Noticed oshЫbku Highlight text and press. Ctrl + Enter
We are
Results of the week. “You do not know what to do? Fell - wrung out! "Results of the week. “We were sincere in our delusions!”
Military Reviewin Yandex News
Military Reviewin Google News
66 comments
Information
Dear reader, to leave comments on the publication, you must to register.