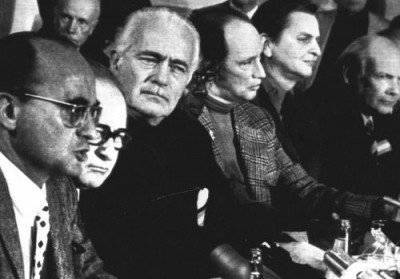 Recently, documents were found in the private collection of a former diplomat and permanent member of the Bilderberg Club George McGee, from which it follows that in 1970, the Club of Rome intended to use the idea of ​​a global matrix (G-Matrix) in order to impose on people a way of thinking environment and the need to regulate the size of the world’s population would be perceived by all as basic human values.


The author of the discovered document is Italian, the founder of the Club of Rome, Aurelio Peccei. In this document, he writes that the conclusions of the club "are largely based on the use of the global management matrix." He further writes that the conclusions of a club as unknown to people as ours (including the conclusion that it is necessary to reduce the population of the planet) can only be perceived by people in the course of a repetitive, global and significant impact. Through such a process, humanity "will gradually be able to reach agreement on an appropriate value base and avoid a dark future perspective."

“The development of the Club of Rome is based on the use of a global matrix. It is necessary to begin the discussion of concrete steps for the construction and application of this matrix. ”

The document also states that the club tried to ensure that all sectors of society accepted and agreed with the conclusions published in his report at the beginning of the 70s.

«It should be noted that such acceptance and consent is the "starting point" for the further evolution of the project of the Club of Rome ", - wrote Aurelio in 1970 year.

“This will be only an approximate value base. Its versatility, reliability and validity depend on the evaluation of respondents using the Delphi method. However, it will be an attempt to carefully and professionally describe the “Problems of Humanity”. The more groups make efforts to solve such intellectual tasks, the more important the dialogue on the global problems of mankind will become. ”

“The problems of humanity” according to the report include “an ever-growing cultural, economic and technological gap between nations, an ominous population growth in a limited space of the planet, the phenomenon of youth riot, the ability to cross the threshold beyond which it will be possible to manipulate human genetic material”.
The models and systems used by the Rome Club to predict future events were also used by China to establish the brutal policies of one child. In 1978, a group of Chinese scientists visited a number of scientific conferences in Europe and readily adopted the ideas of the Club of Rome. Among the members of this delegation was a man who is credited with introducing the very policy of one child, because of which the people of China have suffered over the past decades.

Robert Zubrin, a senior fellow at the US Security Policy Center, in his article in the Washington Post confirms that the policy of one child in China embodies one of the ideas of the Club of Rome:

“In June, 1978, responsible for developing control systems for guided Chinese missiles, Song Zhian traveled to Helsinki for an international conference on the theory of control and design systems. While in Finland, he received copies of the Rome Club's “Limits to Growth: A Survival Project” report, which promotes the theory of Thomas Malthus. He also met some Europeans who strongly supported the computer analysis methods used in the report to predict and model the future of humanity. ”- writes Zubrin.

As an illustration of how the global matrix model has evolved, the report of the First Global Revolution Club of Rome, published in 1991, is well suited. The report contains a description of how a certain common denominator was invented, a common goal around which the whole world could rally.

“In search of a new enemy that would unite us, we had the idea that ideas of pollution, threats of global warming, lack of drinking water, drought and other things came to this role. All of these hazards are the result of human activity. You can overcome them only by changing the attitude and behavior of people. Therefore, the real enemy is humanity itself. ”- the report says.

The idea of ​​a global matrix of imposed consent is an example of how deeply the deception has managed to settle in our minds, that a few years ago nobody even wondered about its validity.

Ctrl Enter
Noticed oshЫbku Highlight text and press. Ctrl + Enter
We are
Situational analysis of the death of the MH17 flight (Malaysian Boeing 777), made on the basis of engineering analysis from 15.08.2014US National Security Interests and American Values: Primary and Secondary
Military Reviewin Yandex News
Military Reviewin Google News
27 comments
Information
Dear reader, to leave comments on the publication, you must sign in.