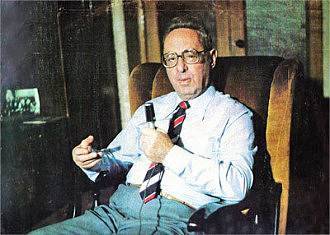 In our days, the functions of the press and television are, in general, narrowed down to a minimum: most mass media representatives are allowed to report only “jaundice”, “dill” and whatever their founders like. The fact remains: in the information age, the means of this information itself can mostly only entertain, frighten or, as they say, “shape public opinion”. But, fortunately, this was not always the case.


From the very beginning of World War II - 24 June 1941 of the year - by order of the Council of People's Commissars of the USSR and the Central Committee of the CPSU (b) a Soviet information bureau was created. The then leaders of the country were well aware that only objective and timely information received could stop the panic, put an end to defeatism, enhance the spirit of the fighting country. And the main way of conveying such information was radio - the most “operational” type of media at that time.

Every day, millions of Soviet people froze at the radio or hands of the speakerphone. They were waiting for issues in which the Soviet Information Bureau transmitted official information on the situation on the fronts, in the rear and in the occupied territories, on the partisan movement and international events. This structure also led the coverage of military events in newspapers and magazines that were published not only in the USSR, but also sent to other countries. After all, it was vital to stop the shaft of the lie propagated by the Goebbels Ministry of Propaganda.

Over the years of the war, more than 2000 front-line reports and orders of Supreme Commander I. Stalin were broadcast, about 135 thousands of articles were sent to bulletins of Soviet embassies and missions, as well as foreign newspapers, magazines and radio stations. And on May 15 of the year 1945, the last operational report of the Soviet Information Bureau was released - Yuri Levitan said: "The reception of captured German soldiers on all fronts is over."

It is worth emphasizing the role of this legendary radio host, who began all the reports with the famous phrase “From the Soviet Information Bureau”. It was he who announced the beginning of the war, and the capture of Berlin, and the victory. It is possible that this native Vladimir, who arrived in Moscow at the 17 age, would have been able to realize his dream and become an actor if he hadn’t come across an announcement about the recruitment of a group of radio indicators.

The fate of Levitan, perhaps, was finally determined by another case. One night, Stalin heard someone read the Pravda editorial on the air. The next day, a call to the Radio Committee followed, and Levitan was asked to read out Stalin's report at the opening XVII party congress.

During the war, the voice of the main announcer of the Soviet Union so infuriated Hitler that he considered him perhaps the very first enemy of the Reich. Moreover, the German intelligence agencies developed a plan for the abduction of Levitan, for whose head they promised either 100, or even 250 thousands of Reichsmarks. Therefore, it is not surprising that he was guarded around the clock, as the highest state officials, and no one except his inner circle knew how he really looks. Some data on work during the war years were declassified only half a century later ...

Subsequently, this unforgettable voice continued to be part of Soviet life: its owner read out government statements, made reports from Red Square and from the Kremlin Palace of Congresses, voiced films, and released “They Speak and Write to Veterans” at the All-Union Radio.

Of course, Levitan was a symbol of the Soviet Information Bureau, but in fact the activities of this department were not limited to broadcasting front-line reports. First of all, it is worth noting the highest literary and journalistic quality of the materials prepared, which came from the pen of Alexei Tolstoy, Mikhail Sholokhov, Alexander Fadeev, Ilya Ehrenburg, Boris Polevoi, Konstantin Simonov, Yevgeny Petrov (during the war he “re-qualified” in simple correspondent and, alas, died during a trip to the front).

Despite the phrase “Moscow says,” the broadcasting itself was conducted from Sverdlovsk (before 1943) and Kuibyshev (in 1943-1945), and in addition, in 1944, a special propaganda department was set up in foreign countries in XNUMX. This direction of work was also very important: it was necessary not only to constantly convince the leaders of the “Western democracies” of the need to open a second front, but also simply to tell ordinary people what the Soviet people are, the country itself. After all, the majority of residents of the same UK and the USA knew little about the USSR, believed in the most stupid tales, and some simply did not want to know anything. But the Soviet Information Bureau, including thanks to the activities of various Anti-Fascist Committees, has managed to evoke at least an interest among the Western public, which later often turned into sympathy.

When the struggle of the Soviet Army and the people against fascism was over, in the postwar period, the main focus of activities was to inform about the internal and foreign policy of the USSR. In those years, the bureau's materials were distributed through 1171 newspaper, 523 magazine and 18 radio stations in 23 countries of the world, Soviet embassies abroad, friendship societies, trade union, women, youth and scientific organizations.

Then, after the war, a publishing department appeared as part of the Soviet Information Bureau, and offices abroad (in London, Paris, Washington, Germany, India, Poland) began to expand their activities. The publication of local periodicals was arranged - for example, in 1948, the first issue of Etude Sovetik was published in France in 1957, and in the USA they began to issue the CCCR magazine, later renamed Sovet Life.

In addition, the staff of the departments carried out, in modern terms, the monitoring of newspapers and magazines from many countries of the world, translated anti-Soviet materials and organized counter-propaganda speeches. During the Cold War years, the importance of such work was difficult to overestimate. And then followed the "reformatting" of the bureau, which was succeeded in 1961 by the Press AgencyNews”, Continuing the tradition of honest and unbiased informing readers and listeners about what was happening in the country and the world.

Ctrl Enter
Noticed a mistake Highlight text and press. Ctrl + Enter
We are
Diplomats of the People's Commissariat of Defense: on the eve and during the warMyths of the Great Patriotic. Did Stalin have prostration in the first days of the war?
15 comments
Information
Dear reader, to leave comments on the publication, you must to register.