Train to Tajikistan to run along Turkmen rails 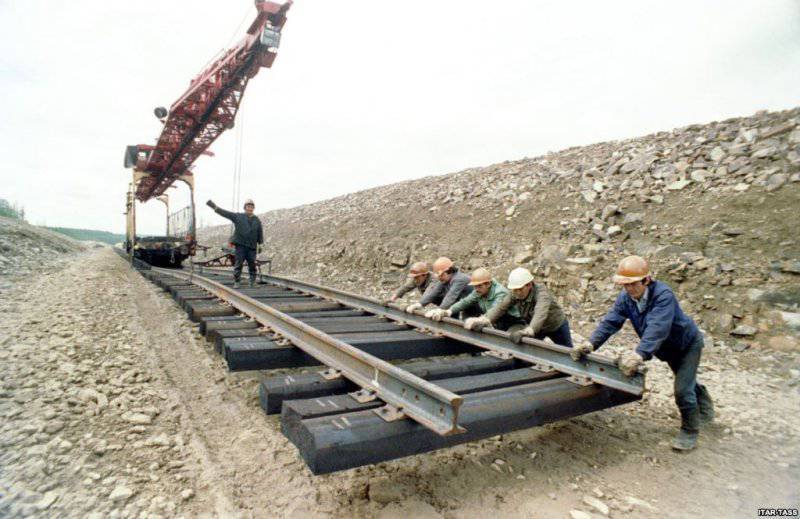 Then, at the Atamurat station, the heads of three states signed a message addressed to descendants, and placed it in a capsule. Having laid the first shovels of concrete, they started the construction of a new railway. In their presence, Turkmenistan.ru reports, the first rails of the Atamurat-Imamnazar-Akina-Andkhoi section of the 123 km length were laid.

Avesta.tj with reference to Turkmenistan.ru, later reported that the President of Turkmenistan signed a decree according to which the Turkmen section of the transnational railway Turkmenistan-Afghanistan-Tajikistan will be built by the Ministry of Railway Transport of Turkmenistan. The document prescribes the start of construction work in June 2013 and handing over objects with full readiness for operation in June 2015.

On the construction of the railway Turkmenistan-Afghanistan-Tajikistan spoke 5 June, President of Tajikistan Emomali Rahmon. His words leads "Khovar".

The President noted the strategic importance of the road, which is expressed both in the mutual rapprochement of countries and peoples, and "in addressing a number of regional issues of an economic, infrastructural, social and humanitarian nature." According to him, the network of roads and railways "is nothing but a real revival of the Great Silk Road."

Rakhmon noted that new enterprises will appear along the railway line, which “will contribute to the development and arrangement of new territories and the improvement of the lives of local residents.” The president said that "Tajikistan, like Turkmenistan and Afghanistan, is a strong supporter of full and effective regional cooperation."

Pavel Gromsky (Rosbalt), writes that Turkmenistan will receive revenues from the maintenance of the new highway, and from the transit of Tajik cargo along the 1000-kilometer section of its railway, which runs along the eastern shore of the Caspian Sea to the border with Kazakhstan. Afghanistan highway will help develop its own railway network. Tajikistan will get a railway exit to Turkmenistan, and through it - either to the north to Kazakhstan and Russia, or to the south to Iran (bypassing Uzbekistan).

But here, Tashkent, the analyst notes, "will lose both the income from transit to Tajikistan and a significant part of the influence on this country."

Last summer, Uzbekistan left the CSTO, and in May of this year, President Islam Karimov solemnly announced the opening of the NATO office in Tashkent.

“And here the main cotton grower of Central Asia, who perceives any strengthening of the positions of neighbors as a personal challenge, can easily recall his long-standing friendship with Afghan General Dostum. The latter is, in fact, the governor-general of the northern territories of Afghanistan, where that very railway from Turkmenistan to Tajikistan will pass. These territories, by the way, are mostly inhabited by ethnic Uzbeks, some of whom are very radical and have a rich sabotage experience. ”

The script is clearly alarmist. As for the western approval of the project, in particular, the American, it was received. 27 June Turkmenistan.ru reported that Gurbanguly Berdimuhamedov received US Assistant Secretary of State for South and Central Asia Robert Blake. The American diplomat conveyed to the head of the Turkmen state a message from John Kerry with wishes of happiness, health and success in government activities.

Analyst Sergey Medrea ("CACIanalyst"; translation - Inozpress.kg) highlights several advantages of the mentioned railway project, pointing out, among other things, how Uzbeks can merge it in a good-neighborly manner.

With the implementation of the project will increase investment and trade between countries in the region. Wide markets will open for local products, which will increase the volume of exports and imports: after all, the railway will connect the countries of Central Asia through Afghanistan with the markets of Pakistan and India. Of course, the project will create jobs. In the long term, the value of Afghanistan as a transit country will grow. As a result, new economic integration will contribute to regional security.

Meanwhile, the author notes, there are also doubts about the project implementation. Anxiety is caused, for example, by the Afghan political situation. There is a risk of renewed war, drug trafficking and the spread of extremist religious movements.

As for Tajikistan, it will benefit in the form of overcoming the current transport impasse and dependence on the Uzbek railways in transit goods. Uzbekistan, the analyst notes, is blocking railway transit, which has been common since Soviet times. Relations between the two countries remain tense. But now the railway will bypass the Surkhan-Darya region of Uzbekistan and connect Tajikistan with Turkmenistan directly. This will allow Tajikistan to import oil products and other goods without obstacles.

Further, S. Medrea notes that Uzbekistan in 2011 built the Afghan segment of the railway line connecting Hairaton with Mazar-i-Sharif and going further to Akina. Uzbekistan is also considering the possibility of expanding the construction of the existing line to the new route Turkmenistan - Afghanistan - Tajikistan. This once again confirms the relationship between the countries of Central Asia, the analyst writes, despite their complex bilateral relations.

The total cost of the planned 400-kilometer railway project is approximately 1,5-2 billion. The driving force of the project is gas-rich Turkmenistan, while Tajikistan and Afghanistan will have to look for additional funding. The obvious sources of financing are the Asian Development Bank, the Islamic Development Bank and Japan. Countries may also request funding for a project from China, which will benefit from the emergence of a new rail access for mining natural resources in Afghanistan and from a shorter route to the markets of Central Asia, the analyst notes.

Thus, the new main project will serve not only the economic development of the countries of Central Asia, but will also be the basis for strengthening good-neighborly relations.

Observed and commented on Oleg Chuvakin
- especially for topwar.ru
Ctrl Enter
Noticed oshЫbku Highlight text and press. Ctrl + Enter
We are
Grandmaster Emomali Rahmon, or Migrants, oil and weapons in exchange for the Russian baseTajikistan wants to get out of the influence of Russia
22 comments
Information
Dear reader, to leave comments on the publication, you must to register.