26 2013 June
30
Having passed the victorious journey from the Don to Prague,
You carried freedom through the fire of fighting,

The inscription on the pedestal tank T-34 in Kantemirovka.

26 June 1942 was created 17-y tank corps, which 3 January 1943, 4-th Guards Tank Corps was converted. He entered history as "Kantemirovsky". This connection went a glorious way during the Great Patriotic War: from the region of the Middle Don to the outskirts of Prague.

From the history of the division

The 17 tank corps was created in June 1942. Housing management was formed in Moscow. On the Volga, in the area of ​​Stalingrad, the corps itself was formed, it included: 67-I and 174-I tank brigades, 66-I tank tank brigade of heavy tanks, 85-I and 92-I mobile repair bases. In the North Caucasus Military District - 31-I motorized rifle brigade. The corps also included the 17-I separate motor transport company, supplying fuel and lubricants (from September). The formation of the 17 Corps 26 June 1942, near Voronezh, was completed. On June 22, corps units from Stalingrad departed for the Bryansk Front and on June 24 1942 unloaded in Voronezh. In mid-June, the molded hull had 180 tanks, including: 23 heavy KV, 90 medium T-34, 67 light T-60. The corps was transferred to the Bryansk Front. The command of the 17 Corps - Major General of the Tank Forces Nikolai Vladimirovich Feklenko (before July 1), military Corps Commissar Vasily Georgievich Guleyev, Chief of Staff Colonel Boris Sergeevich Bakharov arrived here from the capital. From July 2 to July 20 1942, the corps commander was Ivan Petrovich Korchagin, from July 21 to August 6 1942 - Boris Sergeevich Bakharov, from August 7 until the end of the war - Pavel Pavlovich Poluboyarov. 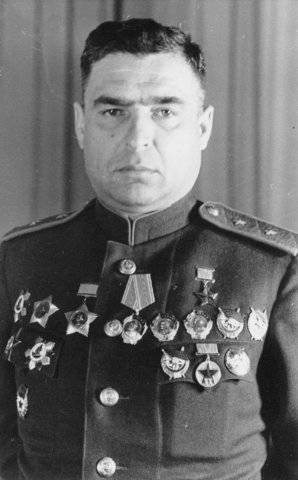 Reference. Pavel Pavlovich Poluboyarov (1901 - 1984). Pavel Pavlovich was born 3 (16) in June 1901, in the city of Tula in the Russian family of an amateur artisan. He graduated from the 4 class of the urban school, worked as an accountant, then as a laborer at one of the Tula factories. In 1917-1918 He was a member of the board of the plant and head of the labor city squads. In November 1919, Pavel Pavlovich joined the Red Army as a volunteer. In 1920, Poluboyarov graduated from the Tula Infantry Command Courses, and the School of High Command Staff of Armored Corps. He was the commander of a heavy tank as part of the 6-th separate tank-armored corps. He fought on the Southern Front, participated in the suppression of the Cossack uprising in the Uralsk region and the elimination of "green" in the Southern Urals. Poluboyarov became one of the first red tank commanders. In 1926, he graduated from the Leningrad military armored school, served as a platoon commander in Kharkov and Berdichev. In 1929 - 1931 - Commander of the armored battalion in the 45 th Infantry Division in Kiev. After passing courses in Kazan in 1931, he was the head of the training tank regiment in Kiev. Then he served as an assistant to the chief of the combat training section of the armored troops troops, and the chief of the 1 sector of the armored troops forces in the headquarters of the Ukrainian Military District. In 1938, he graduated from the Military Academy of Mechanization and Motorization of the Red Army, and was appointed Head of the Armored Troops Forces of the Trans-Baikal Military District. Participated in the Halkin-Golsky conflict. In 1940-1941 - Deputy Commander of the 17 Army of the Trans-Baikal Military District. In 1941, he completed advanced courses at the Military Academy of the General Staff. From January to March, 1941 headed the Armored Directorate of the Leningrad Military District, from March to June - commanded the Armored Directorate of the Baltic Special Military District. From June 1941 to March 1942, Pavel Pavlovich was the head of the North-Western Front armored vehicle directorate, then the deputy commander of the Kalininsky Front for armored forces. Since August, 1942, at his own request, became the commander of the 17 tank corps (the future 4 guards tank corps). Its corps as part of the Voronezh, South-West, 2 Ukrainian and 2 Belorussian fronts went a long way from the Battle of Stalingrad to the Berlin and Prague operations. 29 of May 1945 was awarded the title of Hero of the Soviet Union for the skillful management of the corps while mastering Dresden with the award of the Order of Lenin and the Gold Star medal. After the war, Pavel Pavlovich commanded the 5-th Guards Tank Army; from March 1949 of the year - deputy commander of the armored and mechanized forces of the Armed Forces of the Union, from May 1953 of the year - first deputy, from May 1954 of the year - head of the armored forces. Under his command, the reorganization and rearmament of tank forces was carried out. From 1962, the Marshal of the Armored Forces. Since May 1969, he has been a military inspector-advisor to the group of inspectors general of the Ministry of Defense.

At the end of June - early July 1942, the 17 Corps fought hard with the German forces that had broken through the front. June 28 Army Group "Weihs" launched an offensive from areas northeast of Kursk and northeast of Kharkov and broke through the defenses of Soviet troops at the junction of the Southwestern and Bryansk fronts. The stake was reinforced by the Bryansk Front in three tank corps 4, 17 and 24. All three tank corps were merged into a task force under the command of General Ya. N. Fedorenko. The 17 tank corps was to strike from the Kastornoye area in a southerly direction. The redeployment of the corps took place with great difficulty and was not completed: under the blows of the German Air Force, with the loss of several echelons and lack of vehicles. The corps was forced to fight without a single compact group, a clear military organization and to fight with mixed combat groups. In addition, the counter-attack of the 17 Corps came not from the rear and flanks of the German group, but from its advanced parts. In the area, the Potted part of the corps was surrounded and led heavy fighting for two days surrounded. The corps for several days restrained the offensive of the German grouping and lost significant losses in this battle, including most of the tanks. 4 July 1942, the remains of the corps on the orders of the command moved to the other side of the Don.

July 7 The 1942 of the year, when the Bryansk Front was divided into the Bryansk and Voronezh Front by the BGP Directive Directive, the 17 Corps was incorporated into the Voronezh Front. October 1 Corps was added to the replenishment of the Reserve Headquarters of the Supreme Command in the area of ​​Tatishevo. December 19 The 17 Corps was transferred to the South-Western Front and he took part in the Battle of Stalingrad. On this day, the corps units completely freed Kantemirovka from the German troops. In honor of this victory, when 3 January 1943, the 17 Corps was renamed 4 Guards, he received the honorary title - Kantemirovsky. The 4-th Guards Tank Corps included: 12-I (formerly 66-I), 13-I (formerly 67-I), 14-I (former 174-I) Guards Tank Brigades, 3-I Guards Motor Rifle Brigade, 92-yi and 85-I field tank repair bases, 413-th separate communication battalion, 106-th separate sapper battalion and other connections. After the battle for the Donbass, the 4 corps included: mortar, anti-tank artillery, self-propelled artillery, guards anti-aircraft artillery regiments, separate armored car and motorcycle battalions. The commander of the corps was still Poluboyarov. Chief of Staff of the Corps - Ismail Akhmetovich Nagaybakov. The 4 Corps fought as part of the 2 Guards and 5 Shock Armies, then joined the 5 Guards Tank Army being formed, and for some time submitted to the 4 Guards Army (Battle of Kursk). In 1944-1945 was part of the 5-th Guards Tank Army.

14 June 1945, the corps was transformed into the 4-th Guards Kantemirov division. The unit became part of the troops of the Moscow district with a deployment in the city of Naro-Fominsk. 23 February 1984 of the division was named after Yu. V. Andropov - 4-I Guards Tank Kantemirovskaya Order of Lenin The Red Banner Yu.V. Division. Andropov. During the military reform of 2008 — 2009, when the transition from the divisional to the brigade structure was made, the Kantemirov division was reorganized into the 4-th separate tank brigade, while preserving its deployment position. However, it soon became clear that they were in a hurry with this “reform,” the Russian army needed divisions to confront potential adversaries (the NATO bloc, Turkey and China). Brigades in their structure can be effective in fighting gangs in the Caucasian and Central Asian strategic areas, but not with divisions of the industrial powers. In May, the 2013 of the year, the Kantemirov division was restored. 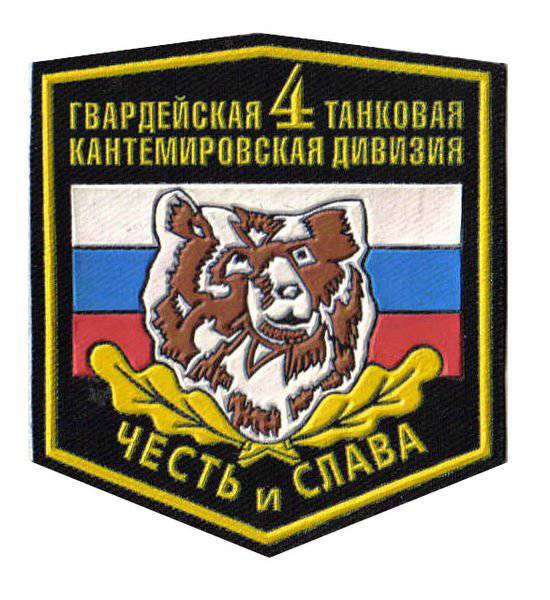