The MP came up with a punishment for homosexuals

24 2013 June
294
Russia is a country of contrasts. We are ready to contrast on everything: from the prerequisites for the fall of the Chelyabinsk meteorite to the consequences of the fall of the ruble exchange rate, from the cost of building Olympic facilities to the resale of Turkmen gas. This, of course, is great: pluralism of opinions, as they say; public multidirectionality and all that. However, it happens that this very pluralism shows itself completely from unexpected sides, and the authors of far-reaching ideas are often the representatives of our political elites. 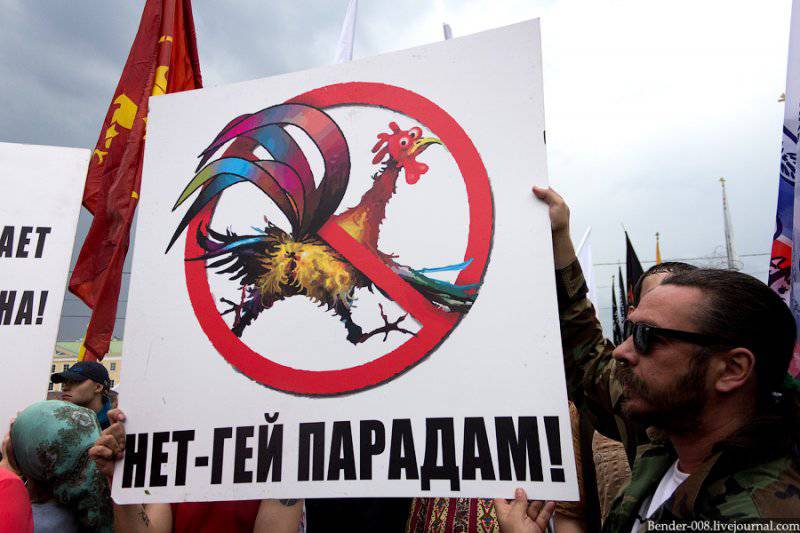 The other day, one of these ideas flew all over news publications and caused a heated discussion. The idea was generated by a Trans-Baikal legislator named Alexander Mikhailov, whose name, as they say, thundered. These same news agencies pulled out phrases from the deputy’s speech, and - it began. First we introduce the very phrases that were presented by many domestic media, and then we will try to figure out what reason they were told about, because of which fuss fired.

So, the deputy of the Trans-Baikal Legislative Assembly, Alexander Mikhailov, declared (without copyright notes):
In the province, it is necessary to adopt a law according to which paratroopers have the right to grab gays and drag them to the square where the Cossacks will whip them with whips. In Russia from time immemorial, the bum served for educational purposes, and not for love pleasures - that’s what you need to use it for its intended purpose.

This text was published on its own pages by various Russian publications, after which a real wave rose against the statement of the deputy Mikhailov. Like, how a high-level regional official dared to himself such words that degrade the honor and dignity of a certain stratum of our fellow citizens and aim the society at confrontation. Most of all, for obvious reasons, those people that Mikhailov propose to “re-educate” with whips were indignant. In particular, one of the most active LGBT activists by the name of Alekseev in his microblog broke out with comments from an emotional deputy proposal. Alekseev wrote that he was ready to endure punishment with a whip only if the deputies passed a law according to which corrupt officials and fraudsters among the officials would cut off their hands.

After this, another wave rose. Many representatives of the liberal wings of our public immediately declared: well done, this Alekseev, even though he was an LGBT person, he washed the deputy - he put the presumptuous official in place. You can, of course, and now begin to reason on the question of which of the two absentee opponents are right and who are not, but whether such reasoning makes sense if we still have not approached the very reason for the deputy’s statements about the need to publicly punish representatives of the gay community. By the way, many news agencies (both print and Internet resources) did not consider it necessary to provide the public with information about what prompted the Trans-Baikal legislator to such impulsive statements. We will not follow the path of other information resources, and therefore imagine a situation, let's say, in its germ.

It all began in the Trans-Baikal Territory with the fact that at the founding regional congress of the ONF (All-Russian People’s Front), which took place on June 18, Nikolai Govorin, Vice-Rector of the Chita Medical Academy, took the floor. He stated that he had chaired the group of forensic psychiatric experts in the region for a decade and a half, and during that time he had paid attention to the fact that our society had become more tolerant of distortions and mental distortions. According to Govorin, citizens began to calmly treat the blatant manifestations of human pathologies, the reason for which are frequent indulgences to perverts on the part of a number of media. Nikolay Govorin also called unconventional sexual orientation as a psychiatric pathology, the treatment of which should be handled by specialists. Finishing his speech, the Vice-Rector noted that the support of same-sex contacts (in particular, marriages) on the part of individual states is a real insanity.

The expert community should develop adequate response programs for both the state and the society so that this phenomenon does not develop further.
- one of the quotes of Govorin.

After Nikolai Govorin’s speech, notes and comments appeared in the Trans-Baikal editions, which made it clear that there are many people in the region who do not share the doctor’s opinion. Imagine some of them on our resource:

Do you know what I'll tell you, my friend Govorin? Tolerant need to be!

"A lot" became this Govorina

Strange, but in 1990, in the 10 edition of WHO, homosexuality was excluded from the list of mental disorders. But what does it matter when the party tells you to think differently?

We can go on and on, but the general sense is clear: the doctor has attacked the "holy" - the fact that in recent years we have become somehow too active, forgive me, vtyuhivat, namely, the dogma that gay couples and gay marriage with gay adoptions is normal. Govorin spoke of this: they say, we accept everything that concerns, the abominations are calm, but as soon as we start talking about counteracting the abominations, we immediately say that the great democratic “stuck” ...

It is obvious that the very Trans-Baikal deputy Alexander Mikhailov, who also issued a tirade about the possibility of public flogging with representatives of the gay community, read the notes and comments about the speech of Dr. Govorin. Here, by the way, is the beginning of the very same quote from Mikhailov, which was stolen by many Russian media:

Yesterday I read the news about the wonderful doctor Nikolai Govorin, who criticized the European marriage law for homosexuals. Many people in the comments under the news urge the real peasant Govorin to tolerance and protect the rights of pederasts and pedophiles. I want to encourage people to take a healthy look at this shame.

So that the deputy Mikhailov spoke about the reaction to the obvious gay lobby, which is already actively beginning to work in Russia — for some reason there is little information in the media. But with ecstasy they represent the second part of Mikhailov's speech, which, of course, is an emotional reaction. Of course, the legislator should not allow himself such impulsive statements, but let us confess that if all this LGBT pack, which has become too active today to declare itself, would have been well-away at all five points with whips in front of everyone, then our society would have par. Yes - not tolerant, yes - not democratic, yes - retrograde. But upbringing should be adequate to the behavior of those who are difficult to educate. Now, if we were quietly whispering about our weaknesses in the kitchens, this is one thing, and when the entire gay brother draws on parades, on television, on a liberal din, then a good whip is quite an option. And as the paratroopers or the Cossacks - it's just as an option from Mikhailov himself. Well, it boils down at the person.

Now, regarding the cutting off of hands by embezzlers. Yes - not tolerant, yes - not democratic, yes - retrograde, but what a lesson ... A lesson for those who cherish their limbs and for those who look askance at the “badly lying” foreign (state) money ... Well, if it seems that to chop hands is too much, then the whip can also fit here. Do not steal, do not commit adultery - age-old truths. And so - a lot of space, the people at all times requires in addition to bread, more and more spectacles. "Tolerance? No, not heard ...". We are so wild in the eyes of the West (the US ambassador himself said), why lose something ...