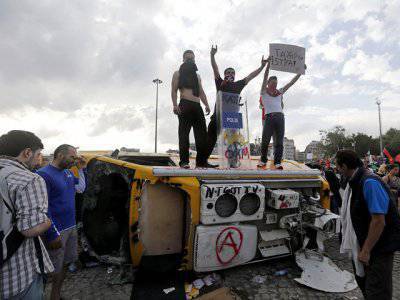 Increasingly dense flow News from the countries of the Near and Middle East - the very amount that is about to develop into quality. A new - and extremely unexpected - president in Iran. Either a subsiding or a rising wave of turmoil in Turkey. Not to mention Syria, where government forces seem to be starting to conquer the unequal opposition.


The buzz of powerful and often bloody news from this part of the world is such that we simply do not have much time to evaluate. For example, in a slightly quieter time, the Saturday statement by the Egyptian President Mursi would be drawn to a quite noticeable sensation. I recall, speaking at the Cairo stadium, Mursi suddenly announced a complete rupture of all relations with Syria and the closure of the Egyptian embassy in Damascus. And no one, in general, comments on such a loud statement: against the background of a million rally of Erdogan’s supporters or a whole series of demarches of Western countries to step up assistance to the Syrian opposition, people simply do not have time to notice such trifles. "Why is he suddenly, this Mursi?" - that's the whole comment.

What is now being observed in the greater Middle East is a very rare phenomenon — at any rate, on such a scale is rare. The huge system has come to the moment when it is still impossible to work, and it should go on to some new mode. The point of bifurcation is called. The system analysts know that this moment is different in principle unpredictability. In the set of observed events, we can distinguish chains that seem to lead to a completely unambiguous outcome - take it and predict it. Yes, that's just different chains of events with equal certainty lead to different outcomes. And on what trajectory the disordered system will eventually come out, nobody knows - in the region itself they would say, only Allah knows.

The most uncertainties discussed here in the Russian mass media in Syria and Turkey are far from exhausting the entire mass of regional problems. They also need to add the most difficult problems of the monarchies of the Gulf, which, it seems, have not calculated their strength, having too actively engaged themselves in the geopolitical game. Here it is also necessary to take into account the newly accumulated discontent in the countries of the "Arab spring", primarily in Egypt. At first, the local street just wondered: how is it that already a month - already half a year - already a year, how they made a great revolution, and life is getting worse? Now she seems to be starting to boil again.

On the eve of the upcoming international conference on Syria, the opposing sides are seeking to strengthen their positions. Iran, it seems, decided to send 4000 troops to Syria to support President Assad. From the Islamic Revolutionary Guard Corps, that is, from elite connections. The Americans, in turn, seem to leave Patriot anti-aircraft missile systems and F16 fighters on the Syrian border in Jordan. In addition, 300 marines arrived in Jordan to participate in US-Jordanian maneuvers in late June. After the end of the maneuvers, they, however, will not leave there, joining the three thousand American military advisers already in the country.

Western policies toward the Islamists in the region look more and more strange: Western aid to, say, Assad is actually received by the same people with whom, formally speaking, the West does not stop fighting - the same al-Qaida. Here is a characteristic statement by the British prime minister: “I want to help the Syrian opposition succeed,” said David Cameron. “I recognize that there are elements in the ranks of the Syrian opposition that we really dislike, which are very dangerous, very extremist. But we don’t have dealing with them. We want to be expelled from Syria. They are linked to Al-Qaida. But among the Syrian opposition, there are elements who want Syria to be a free, democratic, pluralistic country that respects the rights of minorities, including Christian".

So, Cameron says, "we will not condemn the opposition for persecuting Christians, because there are elements among them who want the rights of minorities to be respected." Who prevents these elements from now stopping the pogroms of Christians is unknown. We will help the opposition, says Cameron, in which there are very dangerous elements, because we want them, dangerous elements, to be expelled from Syria. But after all, only Asad is trying to expel them and no one else? Nothing, we still help the opposition.

Of course, the Syrian opposition is not the point — it is a trifle, comparatively. But if Assad really does finish it, then it turns out that Shiite countries have won and are dominating in the region - first of all, Iran and Syria. And this will mean that all other candidates for leadership in the modern Islamic world (Turkey, Egypt, the Gulf monarchies) are left with noses. Bets on the eve of the junction are doubled and tripled. Truly, the bifurcation point: what happens in a week, and even more so in a month - nobody knows. Good luck to you.

Ctrl Enter
Noticed oshЫbku Highlight text and press. Ctrl + Enter
We are
A great interview with Sergey Lavrov: about Ukraine, Obama and IranKurdish question in modern Syria
22 comments
Information
Dear reader, to leave comments on the publication, you must to register.