BAM - the last building of socialism

17 2013 June
40
Much has been written about BAM on the Net, I would even say that very much. However, the study of materials from 10-ti different sites issued by Google for the request "Baikal-Amur Mainline история building "and occupying places on the citation index from about 1 to 50, leads to the same idea: we built it and finally built it ... And what do we do with all this now? 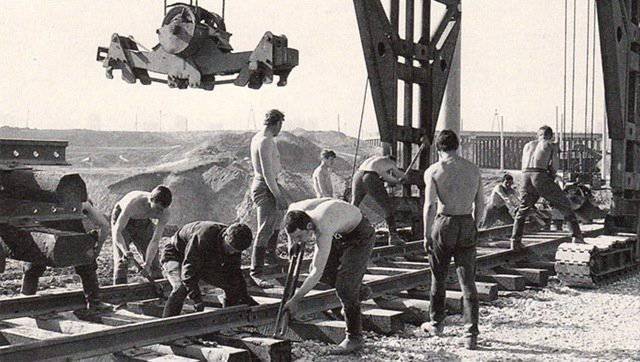 Proposals for the use of BAM weight. But what is interesting is: why did they start building it, if they still cannot decide what to adapt for it? The answer to this question is usually the same: what do you want, this was the construction of the century! The main thing was to build, and why - this is another question!

However, let us try to proceed from another principle voiced by A. de Saint-Exupéry in The Little Prince: "if the stars are lit, it means someone needs it." Suppose now that these goals have lost relevance, but still: why did Stalin and Brezhnev build the Baikal-Amur Mainline? Let us take the axiom that they still had a goal and see what happens with this. 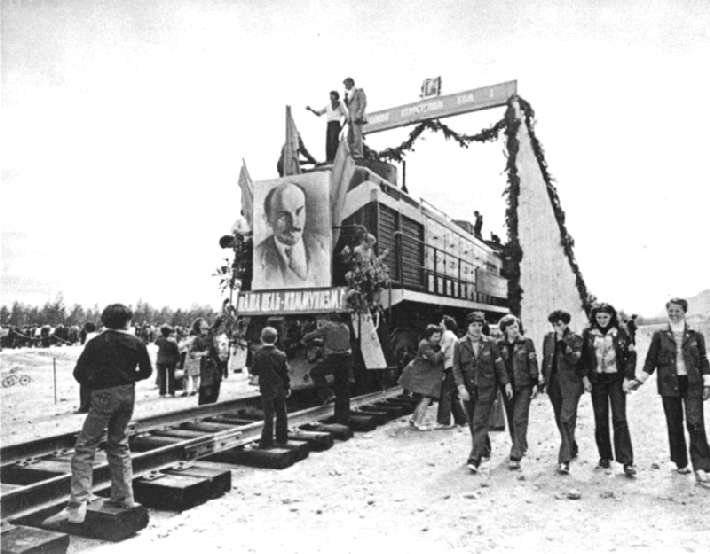 For me, this topic is all the more relevant because in 1989-1991 I myself was in active military service at BAM. For those who are interested: I served in the Internal Troops of special purpose for the protection of railway facilities: bridges and tunnels of the Baikal-Amur Mainline.

To begin, I want to draw your attention to some dates.

So in 1906 year (immediately after the Russian-Japanese war), the idea of ​​the second Transsib is being discussed (and not for the first time!), and even exploratory work is being carried out.
Then everything subsides to 1924 of the year. This year, in the perspective plan for the construction of railways, the "contour" of the second Trans-Siberian Railway is already marked.

В 1930 Year Dalkraykom VKP (b) goes to the Council of People's Commissars of the USSR with a proposal to begin the design and construction of the second Trans-Siberian railway with access to the Pacific Ocean. In this document, the road was first named the Baikal-Amur Mainline.

В 1933 year of the Central Committee of the CPSU (b) and the Council of People's Commissars of the USSR decided to build BAM. In fact, this year the exploration and design work on the future road is just beginning.

В 1937 year, a decision is made to begin construction of the Taishet-Sovetskaya harbor section. Both names are key. Taishet is that fork where Trassib and BAM each go their own way, and Sovetskaya Harbor is the end of the earth: the shore of the Pacific Ocean.

В 1940 year completed the first design task of the entire highway. However, through trains on BAM still do not go and will start to go not soon - not one decade will pass before this point.
After this, the construction does not stop at all, but goes in small sections and not very quickly. It is understandable - war and post-war devastation do not provide an opportunity to conduct full-scale work.

In essence, the Stalinist BAM ends 1951 the year when trains began to reach Lena station (Ust-Kut) in the west, and in the east the following branches were built: Komsomolsk-on-Amur-Sovetskaya harbor and Izvestkovaya-Urgal. Both sections at that time were more like Transsib branches than an independent railway.

Further up to 1967 the year nothing supernatural happens. Some work is being done, mostly of local importance, but serious money is not being invested. And suddenly in 1967m begin (attention!) "large-scale design and survey work throughout the BAM route."

В 1974 year construction work takes place throughout the highway. 15 March 1974 year Leonid Ilyich Brezhnev called BAM "the most important construction site of the 9th five-year plan." 26 April the first shock Komsomol detachment is being created, July 27 Pravda publishes an editorial article "From Baikal to Amur" - the first editorial of the BAM. Same at July 1974 a permanent commission on the construction and development of BAM is created. 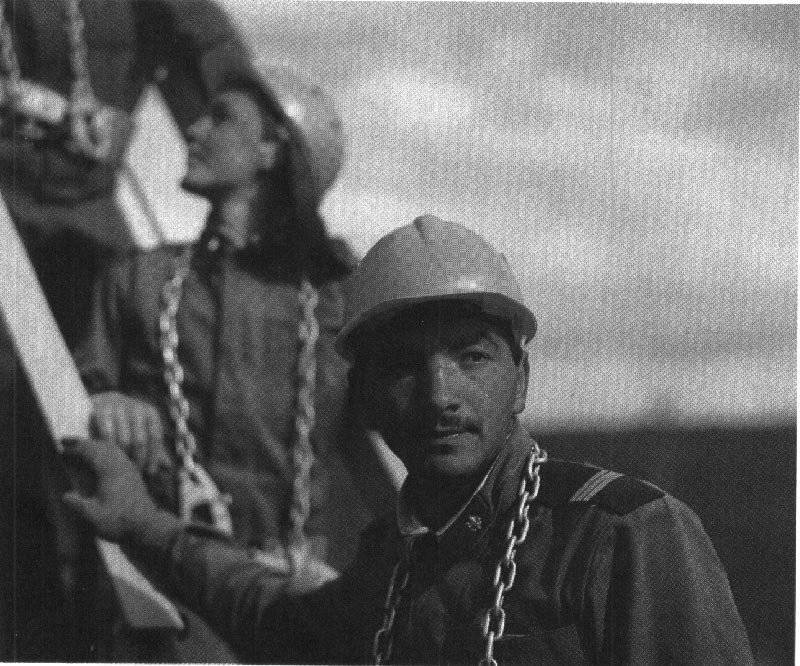 From this point on, the construction, as they say, has gone. The pace and scale of construction is staggering. And eyewitnesses tell legends about this building! .. And not only about heroism and shock work. So, for example, I was told that the construction equipment was overtaken by the sea. And almost all of it was Japanese (!). On the one hand, it is closer to drive than from Europe, and on the other, how much should it cost? Bulldozers, excavators, graders, what else they had. And nobody repaired this equipment and did not even serve it: it worked for how long it worked. Broke - it to the side and bring a new one. Funny episode: among the Japanese, each such unit was accompanied by a set of clothes for the worker. Overalls, jacket, cap - all from denim. It is in Siberia, then! .. Of course, that all this nobody wore - sold on the mainland. You know what cost jeans. And here, as they say, quite stylish clothes were, not "liwis", of course, but still ...

I saw near the village of Kholodny (a good name, really? Somehow it warms ...) and the remnants of the BAMLag from Stalin times. Unfortunately I did not have the opportunity to question the local on this topic. It's a pity...

But we digress. In short, at the end of 1989, I personally met the first through train as part of the regimental orchestra, which passed through BAM. Actually, this would have been the end of the construction history, but the North Muysky tunnel still remained. It was commissioned (attention again!) Only in December 2001 (!) Of the year. The thing is that initially they wanted to make this tunnel the longest not in the world, not in Europe, but everything didn’t work. If I do not confuse anything, at first it should have become the longest in the world, then, after several failures and accidents, the bar was lowered to Europe (although I don’t understand how you can be the longest tunnel in Europe while in deep Asia) , but also - God knows how many years he was carrying with him. And what can I say, if even during the construction of the Baikal tunnel, which I guarded and which are only some 7 kilometers, drifts came across an underground river a few hundred meters before the link. There was an accident, a collapse, they said there were victims, after which it was almost a mile and a half before the bond. Like this. 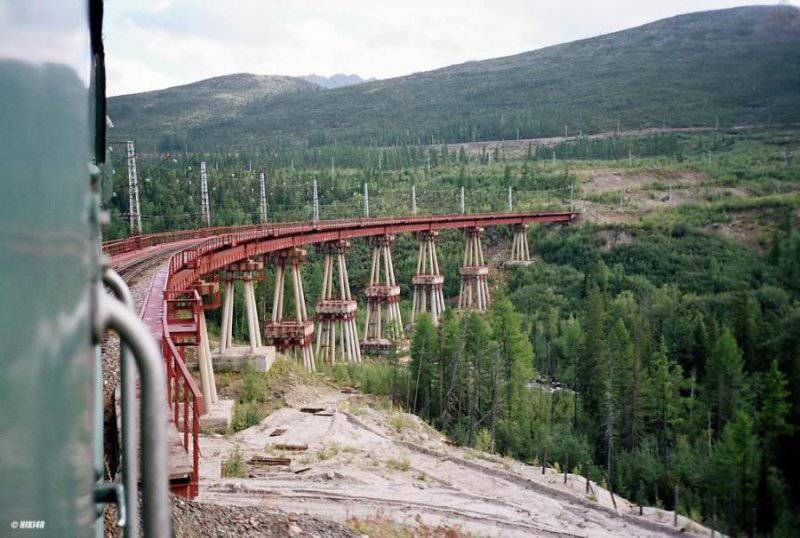 What do we have as a result? And we have, in fact, three, so to speak, surge of interest in the construction of BAM from society and the government. The first one is at the beginning of the 20th century, the second one is in the 30-40 years and the third one is at the end of the 60's and to the bitter end.
Have you guessed it yet? But I even gave a hint at the very beginning!

The need to build the Baikal-Amur Mainline seriously arose if and only if the war started on our eastern borders or there was a threat of its beginning.

Judge for yourself:
1. The beginning of the 20th century - Russian-Japanese war. Immediately after it, survey work begins. Actually, already then the relevant ministries and departments became clear two points:
First, Japan has ceased to be a thing in itself, it seeks to escape from the island grip, and moreover, it will now have to be considered as a country with very real power.
Secondly, in the event of hostilities in the Far East or Eastern Siberia on the part of Japan or China, Russia (and later the USSR) will have serious problems with the railways, because Transsib is too close to the state border (and The Trans-Siberian Railway was still under construction and a part of the Trans-Siberian Railway, if my memory serves me, generally walked through the territory of China).
It seems to me that the experience of the Civil War in Siberia showed the same thing: the presence of the second Trans-Siberian highway is highly desirable. That is why already in 1924 year, it is included in the long-term plan for the construction of railways.

2. 30-ies - Hasan (1936) and Khalkhin-Gol (1939) everyone has heard. But these are only two of the most famous episodes of the Soviet-Japanese confrontation. In fact, the Soviet Union all this time was in a state of undeclared war with Japan. On the other hand, at about the same time as the end of the first phase of BAM, the USSR signs a non-aggression pact with Japan. And the construction is already far from such a pace. Although underway. Despite the war. Stalin knew that he would have to deal with Japan after Germany anyway and, as far as circumstances allowed, he was preparing for this.

Well 60-70-s - confrontation with China. Damansky Island (see, for example, the newspaper "Soviet Russia" from 1 on April 1969 on our website) and the like. Yes, I myself remember in childhood the conversations of mothers whose sons went to the Army: God, if only not on the Chinese border! patience snapped and it was decided to finally build, finally, rokadnuyu railway in the depths of the territory. Although single-track, at least some, whatever, but any road will be better than if there is no. 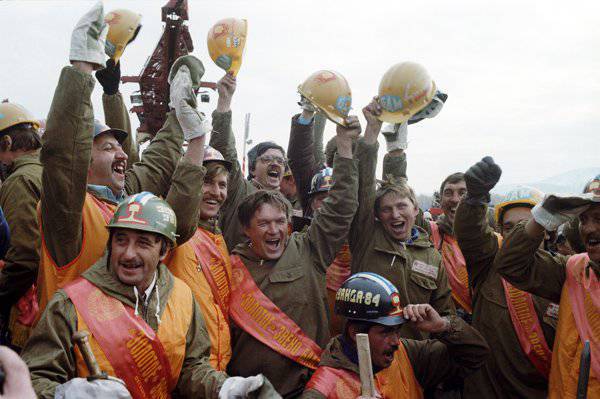 This is the main idea that I want to convey to you in this article: BAM first of all is a strategic rokadnaya railway! And for this purpose it was built throughout the XX century. That is his main purpose - just to be. In peacetime, I agree, it still cannot be used sensibly, but God forbid that in those parts BAM will become the main artery of the Far Eastern war.

This idea is certainly not new, moreover, I do not insist that this is the only reason for which it was decided to build the Baikal-Amur Mainline. 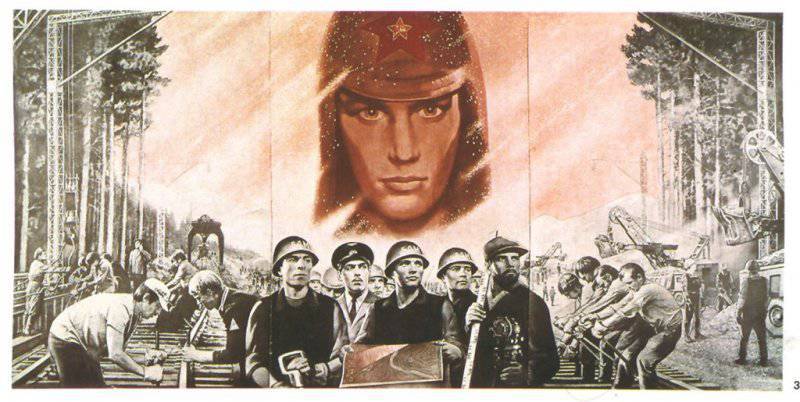 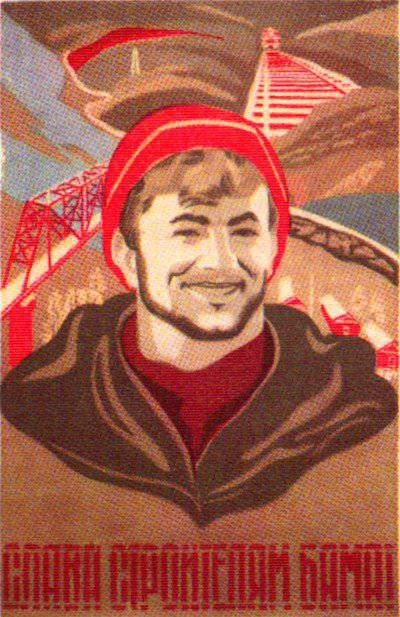 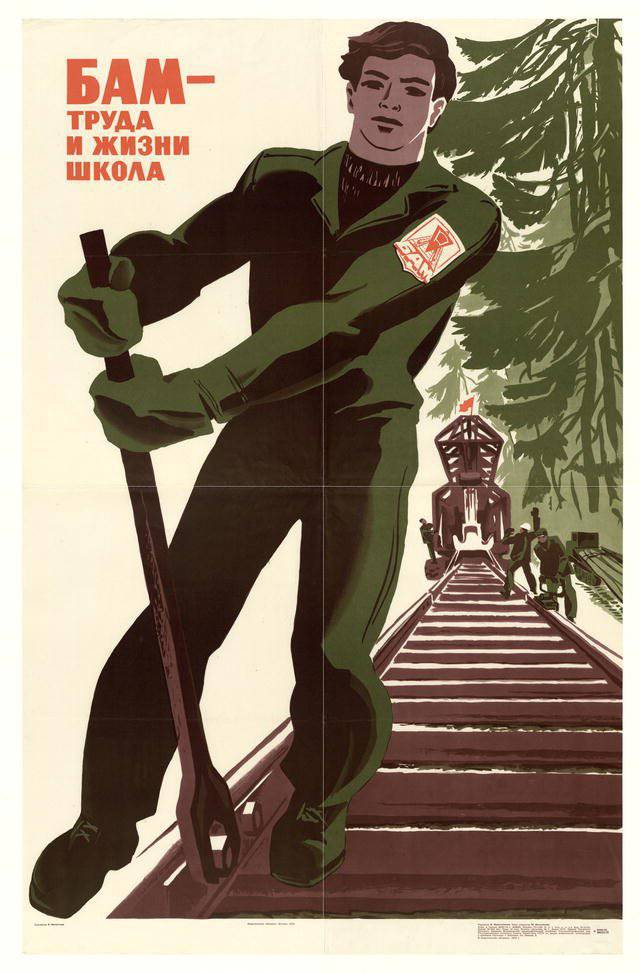 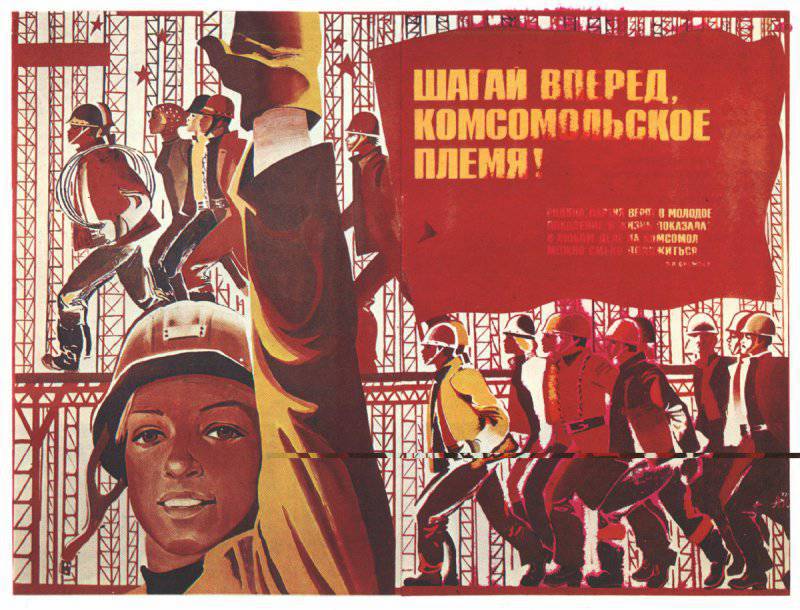 2. When I was in the ranks of the Armed Forces, I learned that in the entire Soviet Union, only two railways were guarded by troops at that time. As it is easy to guess, these were Transsib and BAM. To this end, two divisions of internal troops were deployed throughout the entire route. I wonder how things are now.

3. Please note: even in 90-s, when, it would seem, BAM was anathematized, as another stupid venture of Kremlin dreamers, funding for the construction of the North Muya tunnel did not stop! It was probably cut down, but not completely stopped, although there was a bypass branch and through trains through BAM. Just the throughput of this branch is very small, this is the very eye of the needle, into which it is so difficult (in which case) the camel will crawl through.

4. And another thing: it may well be that the urgent need to build the Baikal-Amur Mainline (along with Afghanistan) halted the implementation of another “Great Project”: Northern River Transfer Project. Apparently, the realization of two such ideas at once, and even with an open front in Afghanistan, was still not affordable for the Soviet Union, even with its petrodollars in the 70s.

Ctrl Enter
Noticed oshЫbku Highlight text and press. Ctrl + Enter
We are
BAM: the cost of building a centuryMyths of the Great Patriotic. Did Stalin have prostration in the first days of the war?
Military Reviewin Yandex News
Military Reviewin Google News
40 comments
Information
Dear reader, to leave comments on the publication, you must to register.