The guys from our yard. Photo report from the opening of a unique sports ground 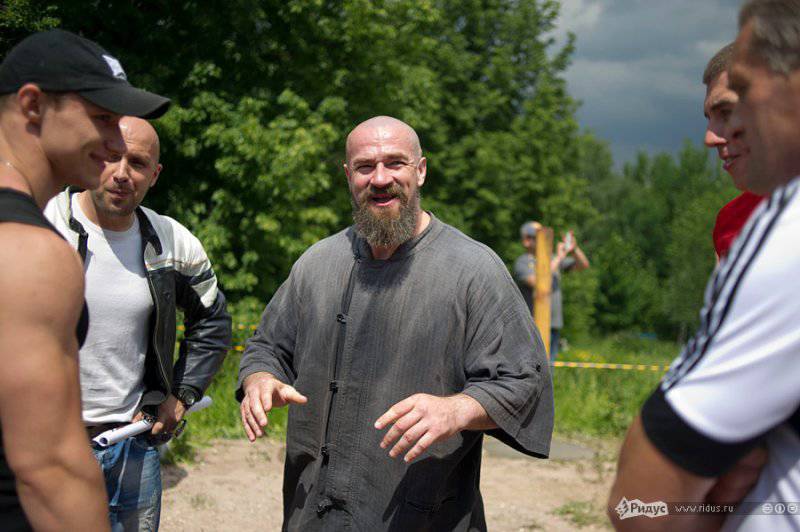 On the opening of the sports ground in the park named after the 50 anniversary of October, on Saturday afternoon, more people gathered than at other political meetings. Healthy lifestyle enthusiasts started dating back in the subway. Waiting for their friends, a group of strong guys arranged a warm-up right in the center of the station hall of Prospect Vernadsky station. In the future, the guys in sports uniform served us as a good reference point in the search for a new sports complex. The organizers made a mistake on the scheme with the address, but did not have to ask the way. Inflated guys and girls confidently walked in the right direction. 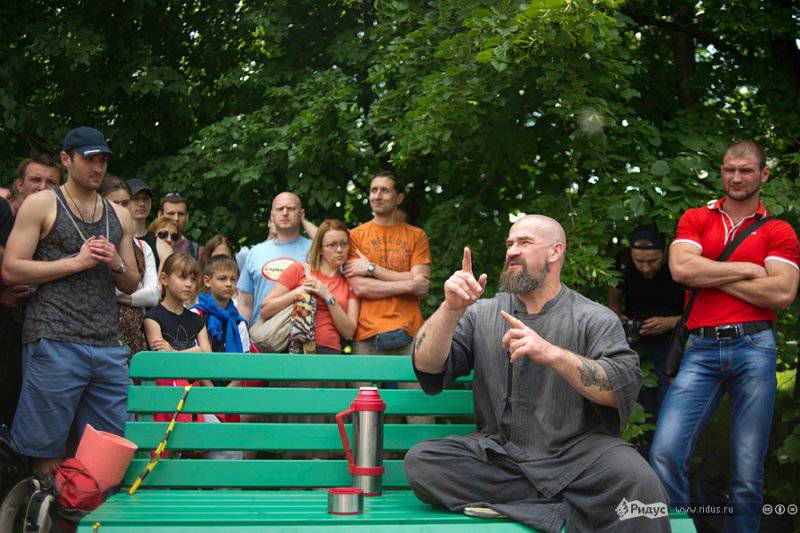 Sergey Badiuk met everyone on the spot. Drinking seagulls from a thermos, the hero in black kimono asked the audience to take care of the sports equipment: “If something breaks, fix it yourself, do not wait until someone does it for you. This site is hard for us. And the matter is not even in money, although it stood up to us like a cast-iron bridge. Problems were in the design of numerous permits and documents. Well, there were people who really helped. I'll introduce you later. Well, thank you. Your merit in this too. We used to work in my yard, so the neighbors, after all, started to go crazy with your crowds. Therefore, I decided to build this site. ” 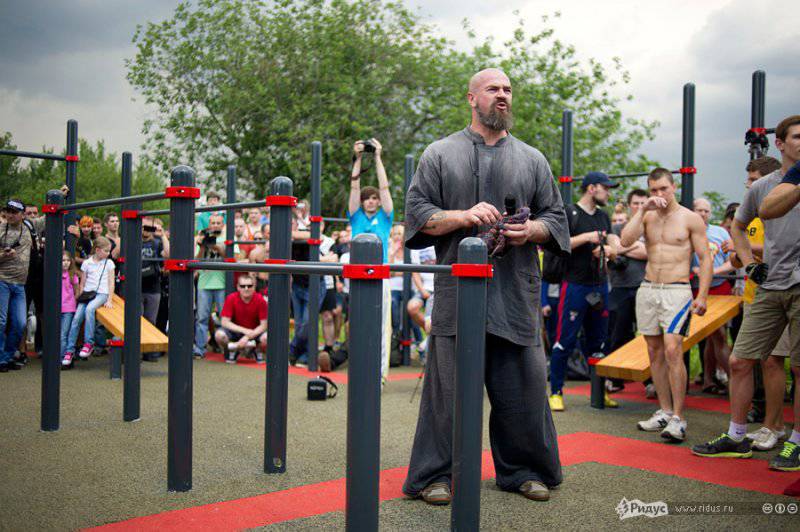 The site in 160 square meters turned out really cool. The complex is densely stuck with all sorts of simulators. The assignment of some mysterious devices became clear only after the demonstration performance of the “turnsteps” from the 24 Workout group. Young athletes clearly demonstrated the capabilities of the equipment and the human body. “Here it gives! Krasava! Just a young man! ”The big guy standing next to me said with a gasp, looking at the athlete pushing on the uneven bars. Behind the back of a person who appreciated the skill of a gymnast, by the way, would have been able to hide a couple of elementary school classes without any jokes. 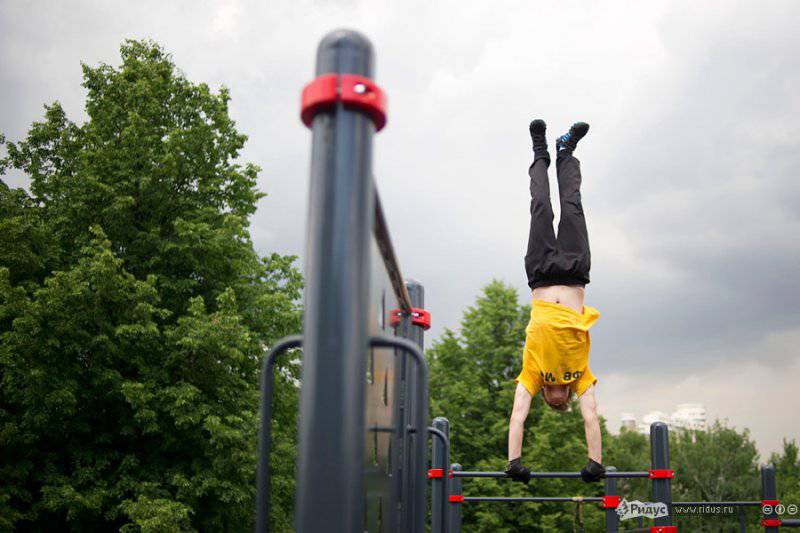 In general, the physical shape of people who came to the opening of the site was respected. Sergey Baduk noted: “It is pleasant to note that you are all healthy, not green. It can be seen: there are no alcoholics and drug addicts among you. Along the perimeter of the site there are benches. Do not let people drink on them. Yesterday I met such a company here. To beat is not necessary, there is no need to threaten either. It is only necessary to look and say like this: “went from here“. Sergey closed his eyes for a moment, turned off everything human in himself, and with a squint looked towards the bench, for a second he turned from a good sensei into a natural monster, even the skin frost. 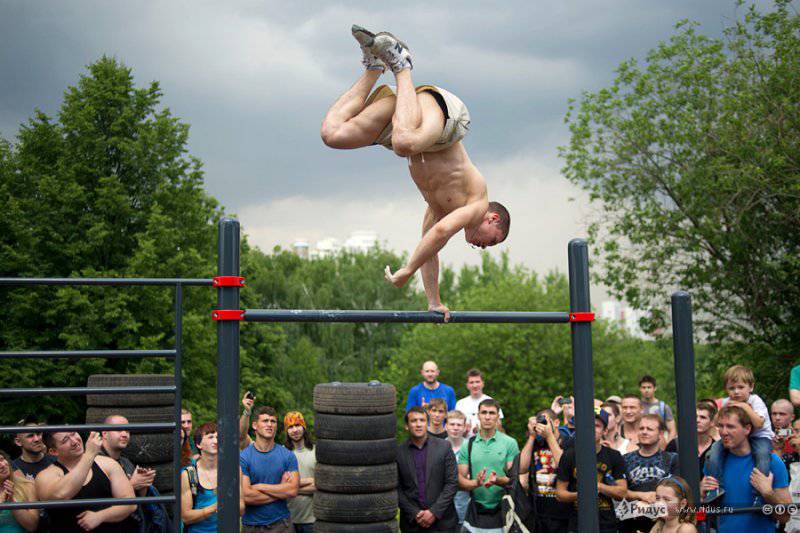 After looking at the line of the “turnstile men”, Badyuk continued: “By the way, I receive a lot of letters on how to get into the army, special forces. I invited the military commissar here. Goblin! Goblin! Not hearing, contused “. "Yes, here I am, here," - said the huge dimensions of a man in motorcycle protection, standing behind me. Having pushed through the crowd to the center of the site, the military commissar invited all those present to contact him for help in the device in the elite units, after the interview.

In the meantime, the guests of honor arrived at the site, in addition, the “authors” of everything that was going on around the Badiyuk - representatives of the Moscow Charity Reserve Foundation, who set out to build as many such sites as possible, and bring famous athletes to training. All this “disgrace” they called the project “Children from our yard”.

“I don’t like politicians at all, I try to stay away from them,” began the solemn part of the Badyuk. “But this man, Veniamin Rodnyansky, is a man of action. Always keeps his word. Said - did. This site appeared only thanks to him. He found the money, and the documents with the permissions of all struck. Please love and respect". 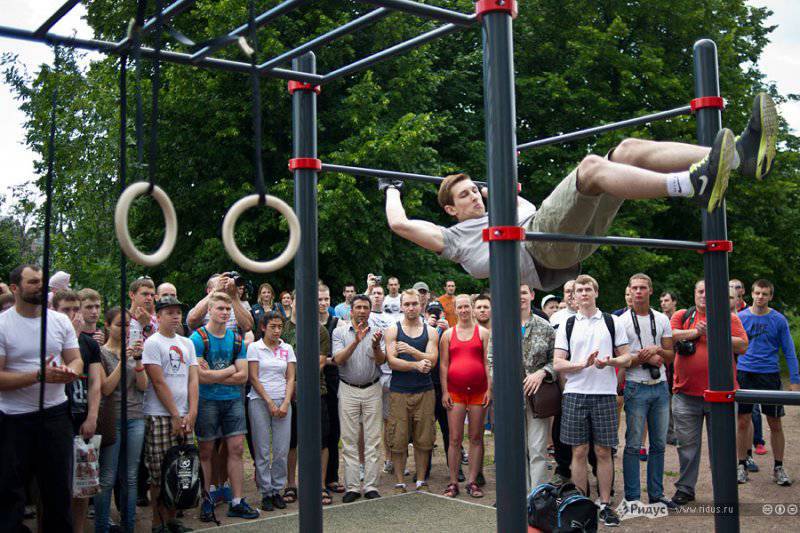 The microphone picked up a huge man, not very different in physical development from Sergey: “I am glad that so many people have come. Not expected. This is the first sign in our project. Very soon another similar platform will appear. It is only necessary to find a senior who will follow her. In general, now everything depends on you. Find an enthusiastic trainer, and we build you a platform. Now there are a lot of drug addicts and alcoholics, but we don’t have to fight them. It is necessary to do so that there are more people like you. You, by your own example, show what is good and what is bad. "

Other guests participating in the event also spoke with the following words: Svetlana Kulakova, world kickboxing champion; Yulia Berezikova, the only Russian woman in the international mix-fight arena, as well as Alexander Shlemenko, the current champion of the no-rule fighting tournament Bellator.

However, the solemn speech did not take much time. After 15 minutes, renowned athletes, guests, athletes and just curious went to different parts of the site to watch and participate in master classes. Without exaggeration, the sports festival was one hundred percent successful. Even the rain didn’t scare sports fans, but he himself was afraid of the rain - he froze and then passed ... 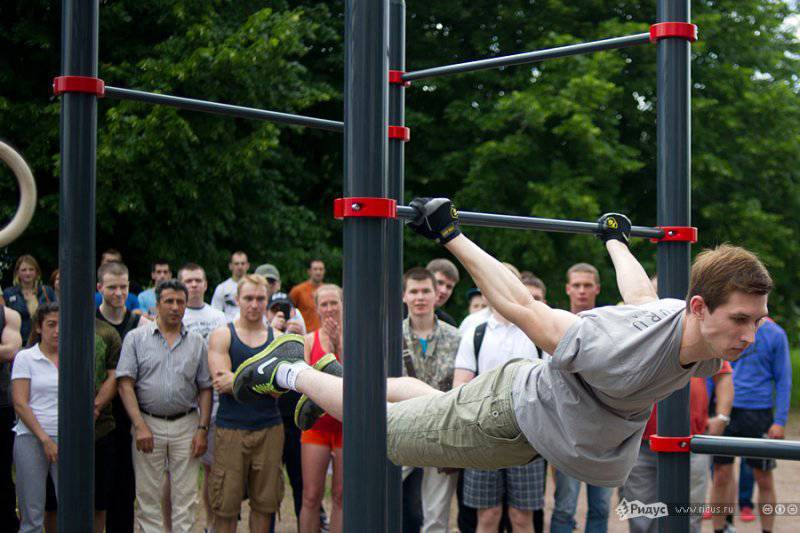 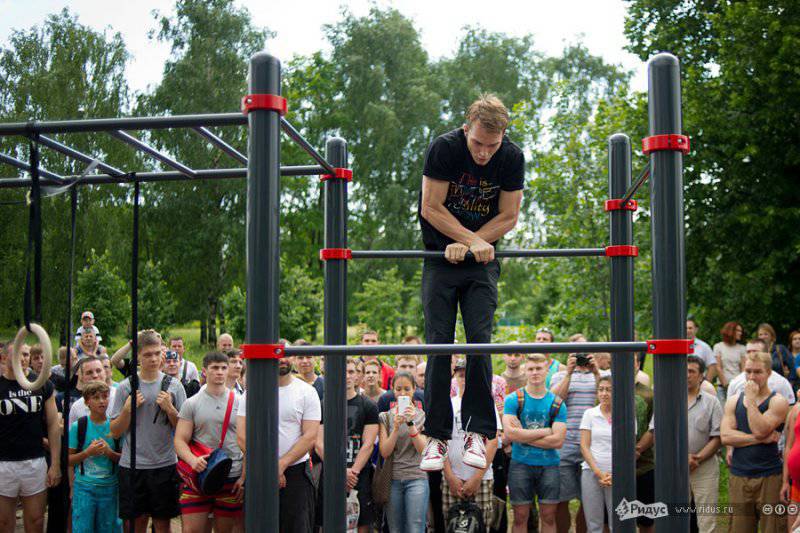 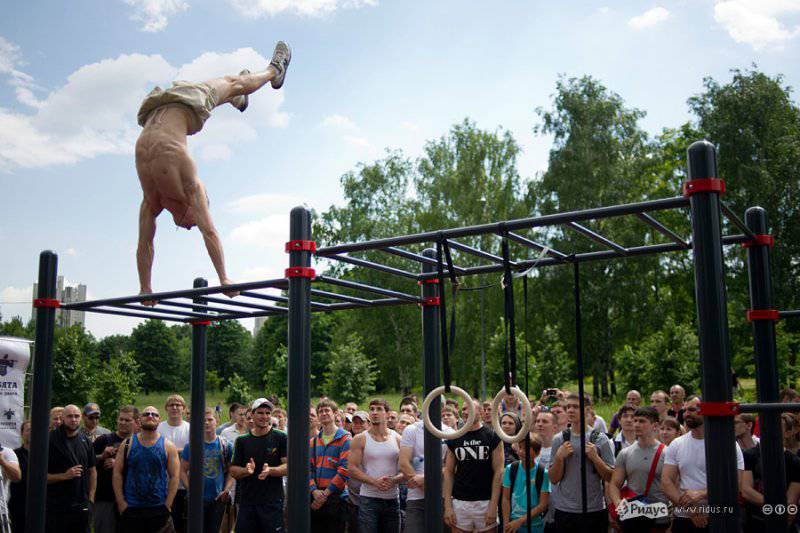 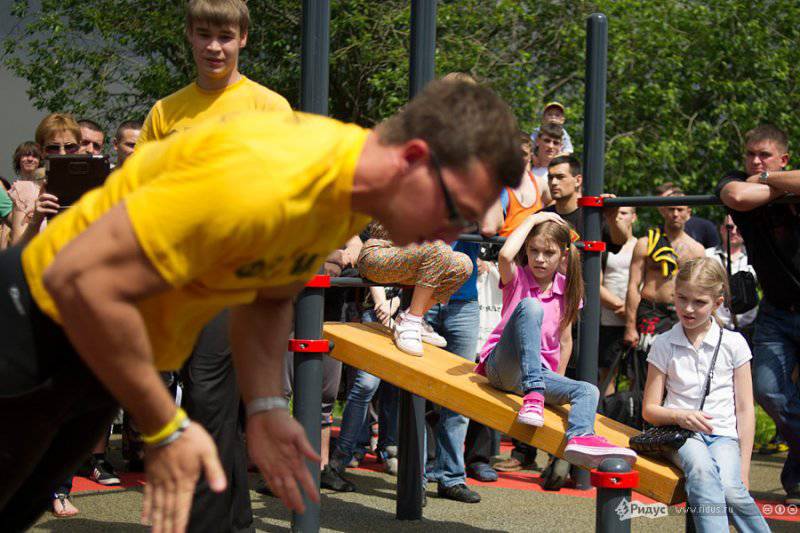 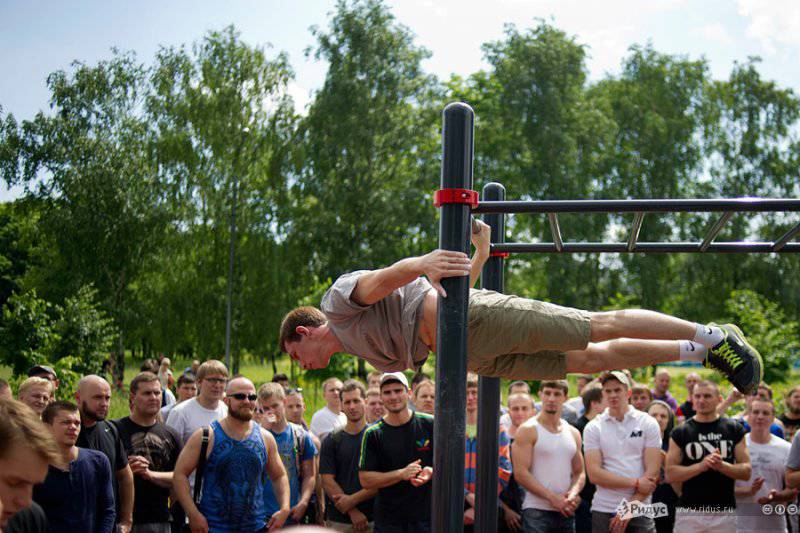 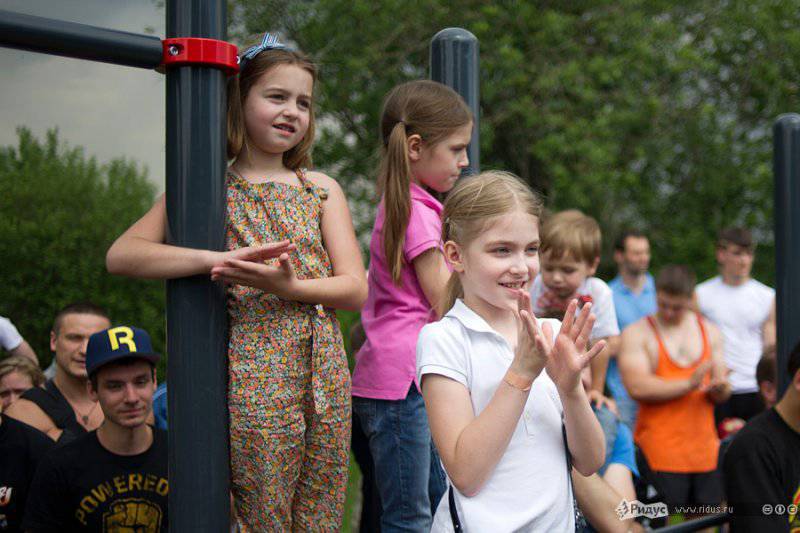 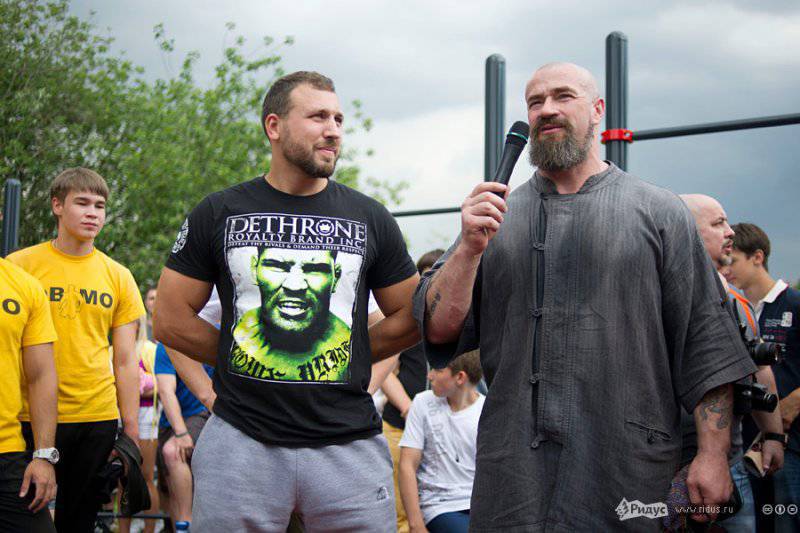 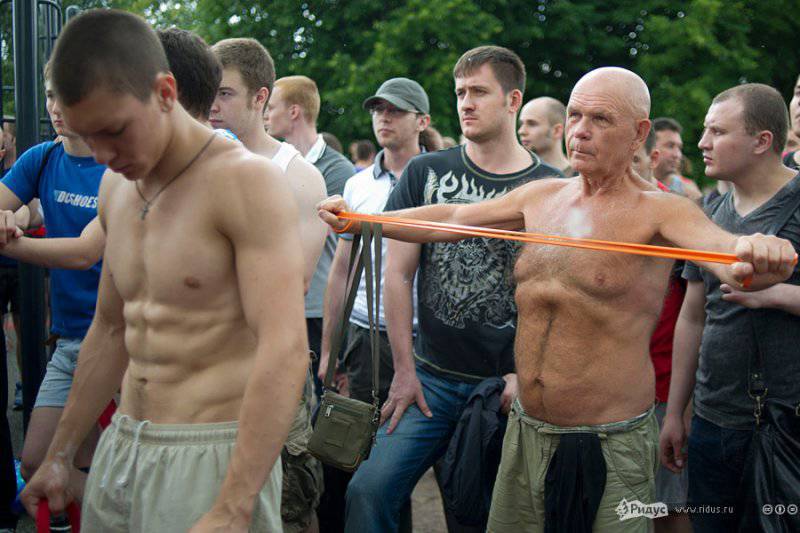 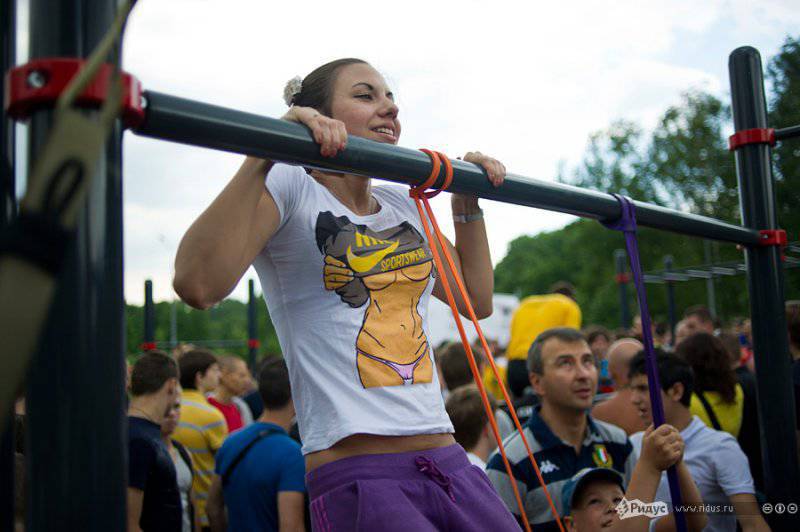 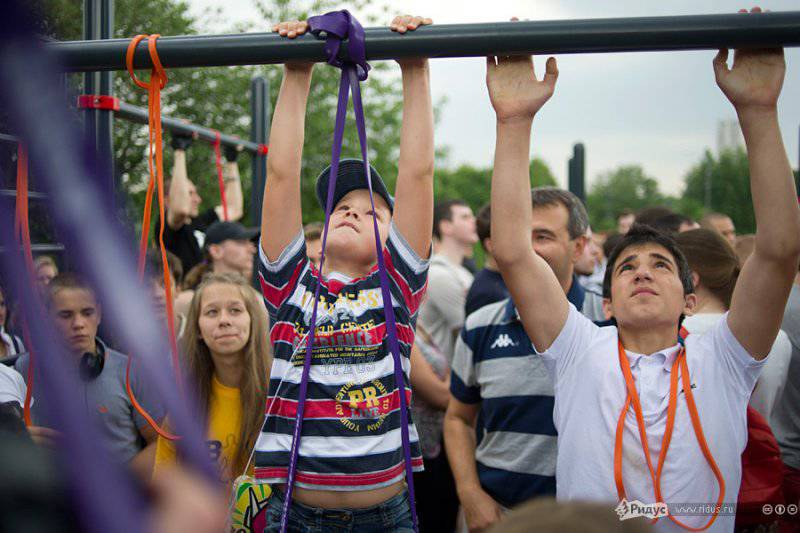 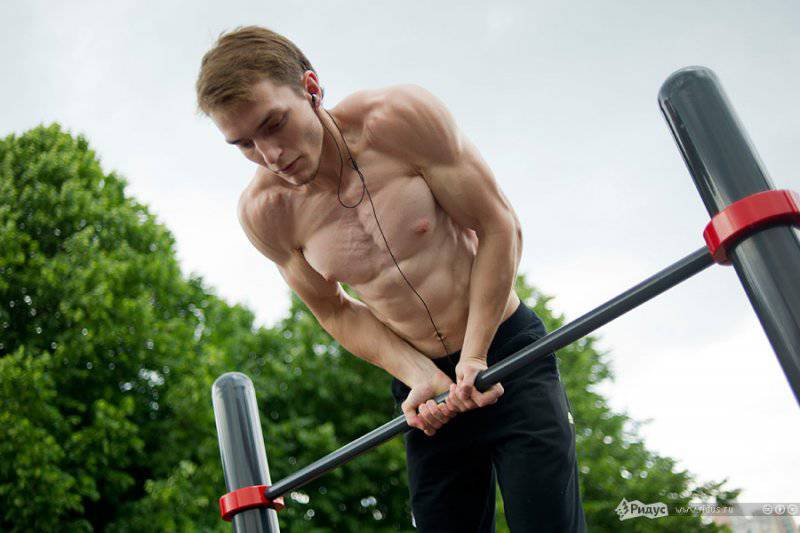 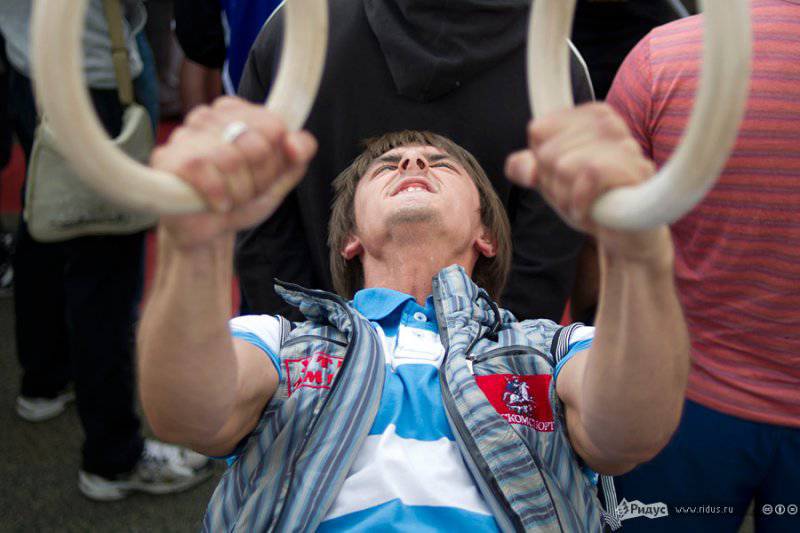 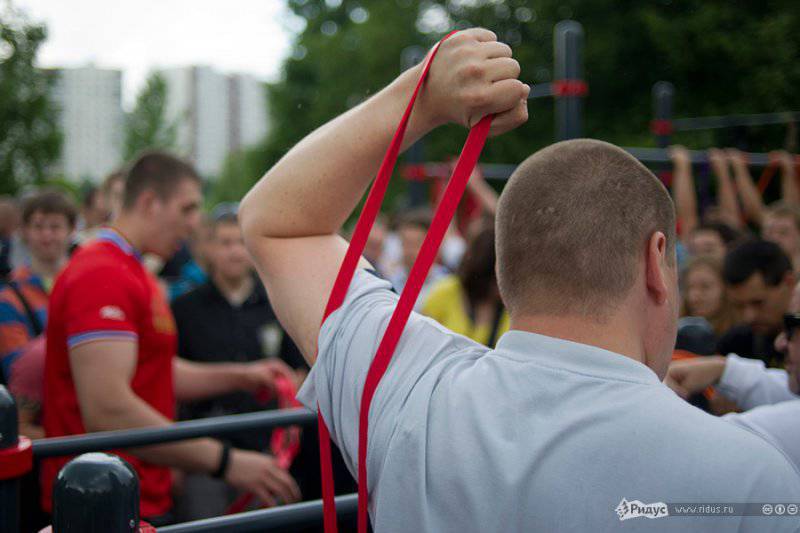 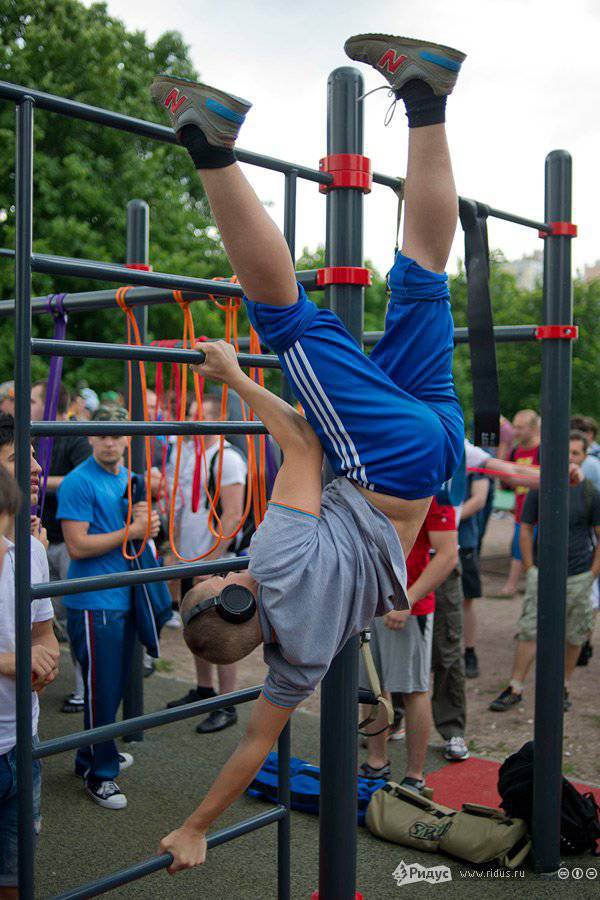 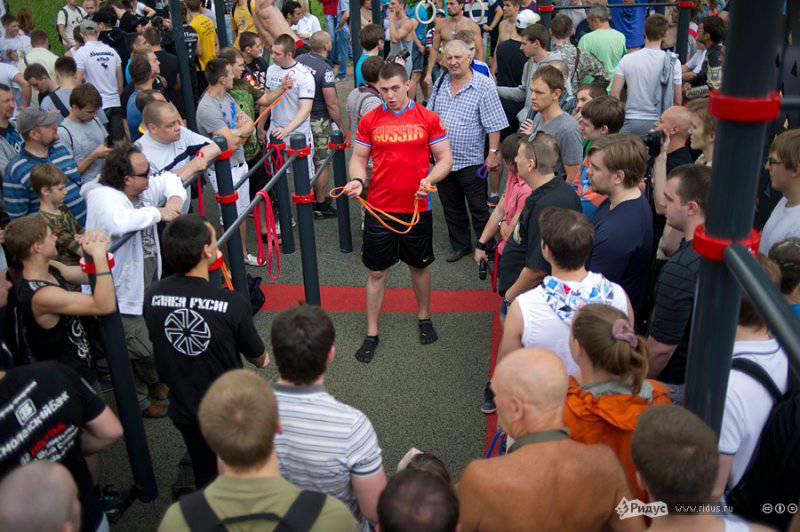 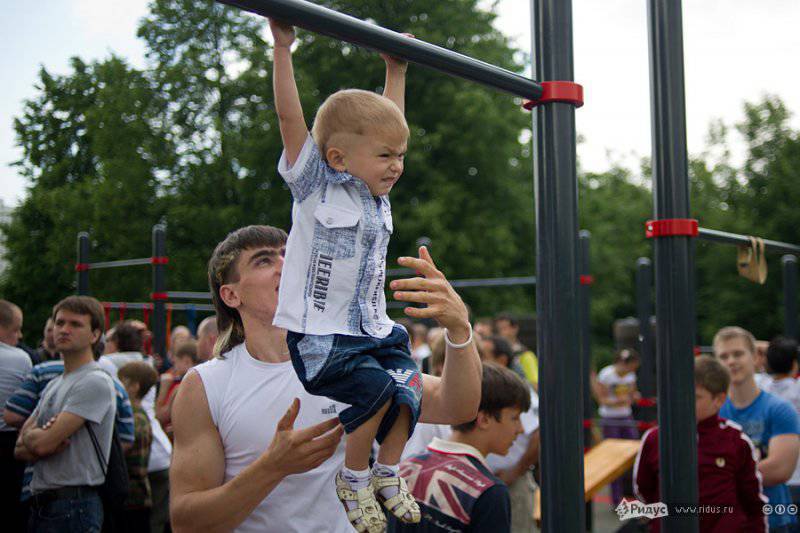