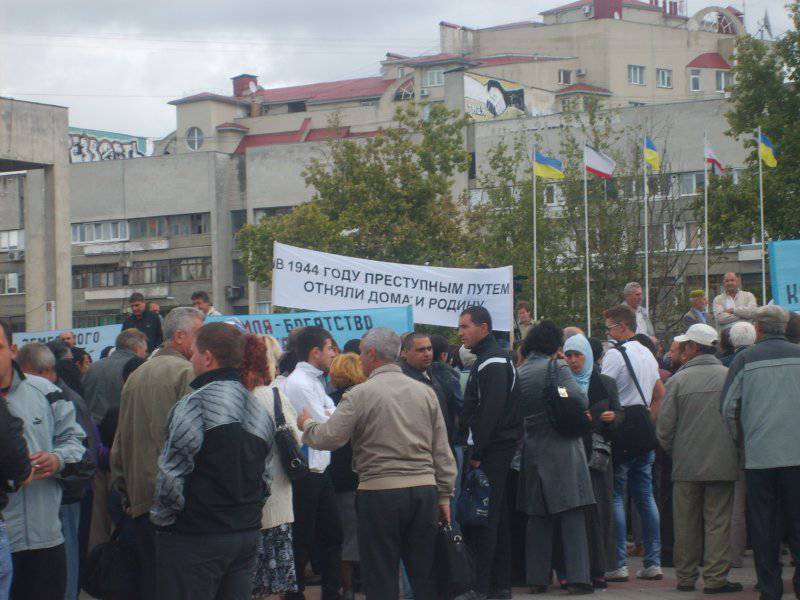 In the autonomous republic of Crimea in the second half of May 2013, the anniversary of the deportation to Central Asia of the Crimean Tatars was once again celebrated. It should be noted that this time the events that were held in this context were marked by some new nuances.

First of all, in the framework of the mourning rally, which took place in Simferopol, and which gathered, according to journalists, about 30-40 thousands of inhabitants, Mustafa Dzhemilev announced that he intends to resign For decades it was the permanent leader of the Crimean Tatars). For the Crimean Tatars, such a decision has ambiguous prospects: on the one hand, the community loses a political leader, whose opinion in Kiev, at least a little, was listened to; on the other hand, the so-called resignation of Dzhemilev gives the Tatars the opportunity to nominate an even more radical leader who can demand from the Ukrainian authorities the granting of Crimean-Tatar autonomy status to the Crimean peninsula.

Another nuance that marked the mourning events was that the Crimean Tatars were unexpectedly supported by the Ukrainian nationalists from the Freedom party. This is all the more strange if we take into account that the same nationalists in every possible way prevent the Russian population of the peninsula from achieving the same, only Russian, autonomy. At the rally of the Crimean Tatars, a representative of Freedom, Eduard Leonov, was delegated, who made a statement that his party fully supported the Tatars' desire. Probably there is no point in saying that Russophobia is the basis of such a union ...

As for the central government, it tried with all its might to look politically correct, even though the head of state V. Yanukovych did not consider it necessary to attend the mourning meeting of the Crimean Tatar community. Moreover, the prime minister of the peninsula A.Mogilev, who was appointed by the president, also preferred a rally to a foreign mission. However, Yanukovych once again managed to distinguish himself by releasing an appeal to the Crimean Tatars and people of other nationalities on the 69 anniversary of the deportation from the peninsula.

In particular, it dealt with the fact that almost seven decades ago, by the forces of the totalitarian regime, cruel repressions were launched against the Crimean Tatars, who were forcibly resettled to Siberia, Central Asia and the Urals. Similar fate awaited representatives of other nationalities who have long inhabited the peninsula, including Armenians, Greeks, Germans, Bulgarians, Italians. However, despite all the hardships and horrors, these people found the strength to preserve their culture, identity and language. The head of state said that the entire Ukrainian population is proud of those people who have retained the desire to return to their native land, as well as mourning those who fell victim to deportations.

Viktor Yanukovych also noted that the state will continue to solve all the problems and issues that are associated with the resettlement of repatriates, even though the country's economy is experiencing certain difficulties. Indeed, only in peace, unity and interethnic harmony can a strong and independent state be built.

After such words, it was impossible not to recall the need to proceed to the implementation of the Declaration of National Sovereignty, which was adopted as early as 1991. It, in particular, states that the Crimean peninsula is the national territory of the Crimean Tatars. And only this nation has the right to self-determination here in accordance with international laws recognized by the world community. In addition, it is noted in the Declaration, the economic, political, spiritual and cultural revival of the Crimean Tatars is possible only in a national sovereign state.

On the other hand, on the eve of the rally, the leader of the Crimean Tatars Dzhemilev threatened the representatives of the Crimean authorities that in case of a ban on holding a rally, the Tatars would block roads and paralyze traffic first in Simferopol, and if necessary, in other regions of the peninsula. Thus, all this can have serious consequences. That is why, noted Dzhemilev, the Crimean Tatars draw the attention of international organizations to the possibility of provocations by the authorities.

By the way, the role of international organizations in Crimea is quite large. Recall that preparations for the elections to Kurultay (representative body that is not recognized by the official Ukrainian authorities) began here in April. This body over time will appoint a new Mejlis, which is also not recognized by the authorities. Meanwhile, at these so-called elections there were quite a few international representatives who wanted to “observe” the course of their conduct. Meanwhile, similar elections were held in Nagorno-Karabakh, Transdniestria, South Ossetia and Abkhazia, but no international organization has ever recognized these elections as democratic ...

Well, if we talk about the genocide of the Crimean Tatars, then, according to some historians, the tragedy of 1944, in fact, was nothing more than a punishment to the traitors for aiding the fascists. Recall that 20 of May 1944 of the year more than 180 thousand people were taken from the Crimean peninsula.

As soon as the war began, most of the Tatars called up for the Soviet army deserted. Representatives of the Crimean Tatars already in 1941 year went to Berlin to negotiate with the Nazis, the theme of which was the possibility of creating a separate state of the Crimean Tatars. At the same time, the Germans were absolutely not going to help them, but only wanted to use the Tatars for their own purposes. Thus, in Berlin, the Tatar National Committee was created, whose main task was the organization of armed Tatar formations in the territories occupied by the Nazis, and resistance to Soviet troops. In addition, the committee under the protection of Germany was supposed to create the Volga-Ural Tatar state, which should include the Tatar, Udmurt, Chuvash, Mordovia and Mari republics, as well as part of the Ural region.

In addition, as documents show, during the years of the occupation of the Crimea, the fascists organized Muslim committees on the peninsula, which recruited Tatar youth into volunteer groups to fight against Soviet partisans, carried out propaganda propaganda among the Crimean Tatars.

In addition, a collection of funds was held on the peninsula, which went to assist the German troops who had been defeated, and special forces were created from soldiers who deserted from the Soviet army, who fought on the German side during the battles for Sevastopol, and also took part in punitive operations.

As historians note, the order of eviction of the Crimean Tatars from the Peninsula was too soft (as for the Soviet regime). In particular, they were allowed to take with them personal belongings, household items, clothing, dishes. In each echelon there were medical workers. In addition, prior to the point of arrival, it was ordered to provide echelons with meals. Moreover, at the place of resettlement, immigrants were allocated land, they were assisted in the construction of houses, food was supplied, a loan was given for construction. Of course, all this may be only meaningless entries on paper for "tick", and maybe not. Now to get to the truth is almost impossible.

Anyway, from 1944 onwards, new and new generations of Crimean Tatars not only in Ukraine, but also abroad, tried their best to rehabilitate their people and give them the right to return to the Crimean peninsula with the possibility of future autonomy.

During the reign of Khrushchev, the Crimean Tatar population was rehabilitated, but it did not receive a return to the Crimea, however, as did the right to autonomy. When M. Gorbachev came to power, the situation somewhat changed, and throughout 1987, representatives of the Crimean Tatars developed active activities in Moscow, threatening to hold mass protests. In this regard, the Politburo of the Central Committee of the CPSU was forced to hold a special emergency meeting, during which it was decided to return the Tatars to Crimea.

As for the more late period of time, since the 2008 year, the Crimean Tatars have intensified markedly. As soon as independence was proclaimed unilaterally in Kosovo, the Crimean Tatars also spoke of the possibility of secession from Ukraine. Then Dzhemilev said that such questions would not be raised if the Ukrainian authorities take into account the requirements and respect the rights of the Crimean population.

In the next year, 2009, according to surveys, almost a third of the Crimean Tatar population supported the separation of the Crimean Peninsula from Ukraine. The Crimean Tatars then started talking again about national independence, but so far as part of the Ukrainian state.

According to most experts, the Ukrainian authorities themselves are to blame for the fact that a similar situation has begun to develop. Official Kiev almost completely ignores the powers enshrined in the basic law of autonomy, thus trying to destabilize the situation on the peninsula. And representatives of Russia say that the decision to transfer Crimea from the Russian Federation to Ukraine, which was made almost 60 years ago, was illegal.

Whatever it was, but if the Ukrainian government does not conduct a balanced and thoughtful policy towards the Crimea, then the consequences of such behavior can be deplorable ...