Do not spit in the well ... you can and ogresti 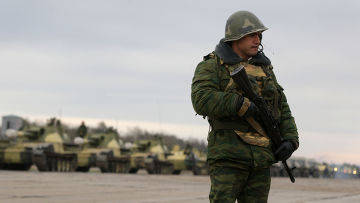 Good day. First of all, I want to thank you for the feedback on the previous article about a friend who is known in trouble. Secondly, very briefly supplement the article with a link, which for some reason was not identified under the article (information was taken from the article “Assad refused a World Bank loan for 21 billion dollars” http://postskriptum.me/) and, therefore, The World Bank knows this. This is one of the comments: “Does the World Bank know about its proposal?” I would like to add to this information that Assad in this interview stated bluntly that with his proposal the World Bank wants to crush the most tasty contracts in Syria. Well, the very fact of such a treatment, in my opinion, is vivid evidence that bankers (and these are very cautious and far-reaching ghosts) ultimately put on Assad. And they - these rogues - always put on the winner. And thirdly, I would like to voice the thoughts that came as a result of heated debates around the topic of the presence of Russian Iskander on the territory of Armenia - a republic that is our partner and ally in the CSTO (this is the first) and a country that Conscious of its vulnerability to an unfriendly neighbor, it sees in the Russian power not only a strong guarantor in the sphere of Armenia’s interests, but also a generous comrade who does not look at a small republic as a vassal. This is the second.


Let's not go into the discussion of the causes of the Karabakh conflict itself, which has become an insurmountable obstacle of today between once-friendly nations that have been able for stories somehow get along with each other. In the conditions of today's political realities, the conflict between the two republics, which could otherwise have been arrested within narrow geographic boundaries and reduced to mutual pranks, today threatens the situation in the entire region, and in the future could become a spark for the world military the fire. Therefore, this question and this situation cannot be ignored by such a political player as the Russian Federation. Like the United States, Russia has the right to declare and define the zone of its interests without thinking about the self-appointed world “beholder” represented by the States. Therefore, it has the right to make efforts to ensure a stable situation in its border zone. Hence the tireless efforts to stabilize the situation, hence the actions to support its allies and partners. And, naturally, this cannot cause in other countries - “non-partners” - a rejection reaction. Such a reaction happened to our neighbors - the Republic of Azerbaijan.


It should be recalled that throughout the entire post-Soviet period, the often changing Russian leadership has invariably made efforts for more or less good-neighborly relations with Azerbaijan. And this was possible not only thanks to the Russian presidents, but also for economic reasons. No one had any desire to prove their point of view by force, since the collapse of the USSR brought ruin to all the once Soviet republics. As they say - Not to fat, I would live. But, as time went on, the economy gained momentum and, of course, began to break through and thoughts not only about the declared independence, but also the approval of this independence de facto - as full economic and political independence. This is quite understandable - the small republics that are in political and economic (here - everything is relative) dependency very much wanted to feel like values ​​and subjects of independent politics. Is it worth it to condemn? By no means. But, the problem is that some of the republics that became independent limited themselves to their existing borders at the time of the collapse of the USSR, and some, due to various (including purely ambitious) reasons, set out to redistribute these very borders. And such cases without conflicts, as world practice has shown, are not enough. It is to this kind of conflict that I relate the conflict between the two republics - Azerbaijan and Armenia.

I repeat - I am not going to analyze the causes of this conflict, but just want to indicate Russia's position on this issue (as I see it) and justify the steps taken by our leadership, who has created new political realities in this explosive region.


Old-timers of the site may recall that a couple of years ago, when they discussed this issue again on one of the branches of the VO Forum, I, in an attempt to defend Russia's steps in this matter, said that ideally unleashing the entire tangle of stratified contradictions is unlikely that it can Only Putin can solve this situation and if he manages to cut this Gordian knot without blood and finally bury this conflict, then he has the right to be called a political genius. About this - a little later.

Unfortunately, time has shown that at the moment this question is still waiting to be resolved. But what happened in the past few months, gives reason to believe that, to some extent, Putin has managed to solve this issue, if not solve it, then put him into a corner for better times without the risk that much blood will be shed in the region.

What I mean. This is due to its constant efforts to assert itself in its independence, numerous unspoken alliances, first with Iran, then with Turkey and NATO (the appetite comes with eating), with its eternal fears that the Kremlin will lay its palm on Baku’s oil wealth and, with its calculations, join “The brotherly family of European peoples”, the Republic of Azerbaijan crossed that unsteady line separating good neighborliness from the polite and tolerant neighborhood that had developed before that. And this allowed the eternal opponents of Russia, seizing the string, to unleash a whole bunch of contradictions between Baku and Moscow. How can I condemn the policy pursued by I. Aliyev? He does what his understanding of the independence of his country tells him. The only thing he forgot about was that his father, the respected G. Aliyev, always avoided considering Russia as a potential adversary. And until recently, Russia has made relentless efforts so that such relations do not appear and do not continue. But, those actions that Azerbaijan has taken in recent years, namely: - increased build-up of its military potential under the rhetoric of revenge on Karabakh, constant pressure on Russia to intervene in the conflict from the position of one of the parties (of course, more preferable - Azerbaijan), curtailing programs cooperation in the field of collective security, flirting with NATO (this was especially clearly shown in the days of the escalation of the Iran-NATO confrontation two years ago) expressed in the provision of oih airfields, as jump airfields for bombing Iran. And do not say that this was not. There was info about it was widely available. But - there was no conflict and - thank God, but "the sediment - remained." One could not diplomatically notice this either. However, the desire for final independence (although - much more final! We have our own wedding, you have our own!) It was incumbent on Baku to demonstrate its sovereignty to the Russian leadership (and on other assumptions - to demonstrate its loyalty to overseas friends) to the fullest and wanted to do it through the rent of the Gabala radar. Well then - you have every right, your territory. But, only such a sharp increase in fees (we can say it is unprecedented and rhetoric about protecting the environment, which cannot help but bring a smile) is more like twisting your arms with the goal of eliminating in any way the balance of NATO efforts in the Caucasus. That is - a direct advancing to Russia's direct rivals in this region. Well, and how then do Russia relate to this? Continue to smile and pretend, "sho and bulo?" Maybe it would be if Russia was still in that half-fainting state, into which its reformers of the Yeltsin epic drove. But - times have changed. Russia has reappeared the sphere of its interests, which it intends to defend. This area also includes the Mediterranean point of support (in broad transcription - the base) fleet in Syria - Tartus. And it was necessary to happen that a small but proud Syria (the analogy with the “small but proud bird ...” from the movie “Prisoner of the Caucasus” suggests itself), the same thing, fell into the sphere of interests of the USA! Ocaziya - however. And another opportunity is that Russia showed obstinacy and did not want to subordinate its interests to the interests of the states. Conflict of interest, gentlemen ...

It was here that the background inspired by official Baku with respect to Russia was fully revealed. At a time when Moscow was preoccupied with the support of its Syrian ally, Baku set out (by itself, with the filing of new overseas friends) to strike Russia under its thumb. No matter how hard the parties tried, in keeping with diplomatic etiquette, they could not find a stalemate, they didn’t find any points of contact, and Russia liberated the “occupied” (according to some Western “experts”) territory. The principles of proud Azerbaijan passed on Moscow’s stubbornness. Grace. But, the tangle of contradictions between Yerevan and Baku could not go anywhere, and Baku came very close to resolving this issue in the traditions of Julius Caesar - slash at this unfortunate node with a sword and - the end.

It is here, my friends, and we should remember the fact of the appearance of Iskander OTRK at the Russian base in Gyumri. Unwittingly, our “Azerbaijani partners” have put into the hands of Putin a tool for a temporary solution to the Karabakh issue. No, Putin did not appear as a genius who decided this chronic conflict once and for all to the greater joy of the conflicting parties, but he managed to push this question for the period necessary for Russia until the more “red-hot” and urgent problems were solved - butt in the Middle East. If Russian complexes did not appear now in Armenia, who could guarantee that this summer Azerbaijan did not even think to try to prove its case with the strength of its armed forces? And now - this is almost a 100% guarantee that at this period in the Caucasus, the underbelly of Russia will be, albeit a relative one, but the world. And there, you see, we will return to this question.

So - peace to us, guys, on our near borders and good luck in our good work of supporting the fraternal, Syrian people.

Ctrl Enter
Noticed oshЫbku Highlight text and press. Ctrl + Enter
We are
What you didn't want to know about EnglandInterview by President Bashar Al-Assad to the Sunday Times
Military Reviewin Yandex News
Military Reviewin Google News
236 comments
Information
Dear reader, to leave comments on the publication, you must to register.