Modernization of the Kaluga submarine completed 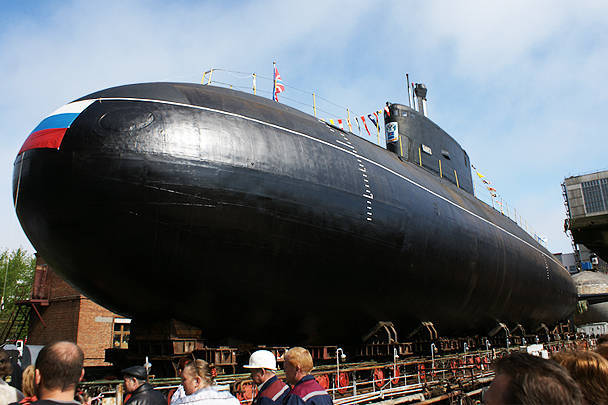 Diesel-electric submarine of the North fleet Kaluga - the first in 20 years to be modernized at the Zvyozdochka plant in Severodvinsk - will go to sea on June 13 to continue testing, the plant’s press service said.


In the Zvezdochka Ship Repair Center in Severodvinsk of the Arkhangelsk Region, where the modernization was carried out, it was reported that “the tests were not completed in December last year due to the difficult ice situation in the White Sea,” ITAR-TASS reports.

# {weapon} The submarine will be put into service this year. It will be the first in the last 20 years non-nuclear submarine, repaired by Zvezdochka shipbuilders for the Russian Navy. The service life of the submarine extended for another 10 years.

# {bigimage = 632287} Kaluga arrived at Zvezdochka for medium repairs and upgrades in 2002. As the enterprise’s press service specified, the limited funding of the state armament program and the priority of maintaining the nuclear submarine’s combat readiness did not allow the Ministry of Defense to start financing work on Kaluga earlier than 2010. All this time the ship was on the stocks of the Severodvinsk shipyard.

The Kaluga diesel-electric submarines (project 877, code “Halibut”, according to NATO classification - Kilo) was built in 1989 at the “Krasnoye Sormovo” plant in Nizhny Novgorod.

First, the submarine was part of the Black Sea Fleet, then redeployed to the North.

The submarine was designed in the Central Design Bureau of Rubin marine technology in St. Petersburg.

Submarines of this project are designed to combat surface and submarine ships, minefield installations, reconnaissance. They are one of the most low-noise Russian serial submarines.

Ctrl Enter
Noticed oshЫbku Highlight text and press. Ctrl + Enter
We are
Severodvinsk ships in May will launch the Kaluga non-nuclear submarine of the Northern Fleet after modernization
Military Reviewin Yandex News
Military Reviewin Google News
21 comment
Information
Dear reader, to leave comments on the publication, you must sign in.