Kosovo Albanian mafia is heading for the seizure of southern Serbia 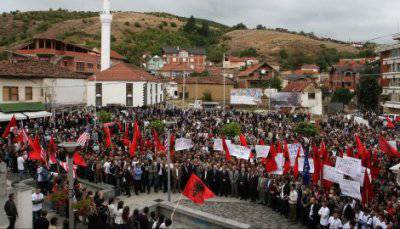 While the Constitutional Court of Serbia remains silent about the constitutionality of the agreements concluded with Pristina by Belgrade, the north of Kosovo is being transferred step by step into full ownership of the Kosovo regime, and the latter has already set its sights on seizing the next part of Serbia.


On May 31, 2013, without exaggeration, historical a meeting of the “parliament of Kosovo”, on the agenda of which for the first time since Kosovo’s independence was raised the question of Pristina’s “constitutional obligations” - to take care of the rights of Albanians in the south of central Serbia, namely the communities of Presevo, Buyanovac, Medvezhya (the Albanians call the south of Serbia the Presevo Valley). The draft resolution of the “Kosovo parliament” was introduced by the deputy of the Democratic Union of Kosovo (Hashim Tachi party) Lufti Khazari. The project provides for freedom of movement in and around Kosovo; cancellation of entry fees to Kosovo; development of education in the Albanian language; opening of the Chancellery in Pristina and Gnilan (territory of Kosovo and Metohija) for communication with the Albanians of the Prešev Valley. H. Tachi supported the resolution, but noted that this measure alone to develop the role of Kosovo in protecting the rights and interests of not only the Albanians of the Prezhevskaya Valley, but wider is not enough. He proposed to resolve the issue by conducting a wide range of constitutional reforms in the “Republic of Kosovo” to protect the rights of Albanians both in Serbia and throughout the former Yugoslavia.

Pristina considers the south of Serbia as a “branch” of Kosovo, therefore the Albanians - representatives of the south of Serbia (citizens of Serbia) also participated in the work of the parliament of the “Republic of Kosovo”. "The Government of Kosovo" expressed support for the deputies who initiated the discussion on the situation of Albanians in the Presevo Valley, demanding the release of "political prisoners, including the so-called Gnjlan group."

Members of an organized criminal group (17 people - members of the so-called Gnilan group of the Kosovo Liberation Army operating in Preševo) in September 2012 were convicted in Serbia for crimes against Serbs committed with particular cruelty in 1999 in Gnjlan (torture , bullying, murder). Then 80 people were killed and 260 captured. The killings were sadistic, it was a “message” to those Serbs who, being expelled from their homes, wanted to return - “it will be even worse with them” and those who remain in the province - “they should be evicted”. Most of the Gnilanian organized criminal group (including the leaders), despite all appeals to the European mission of EULEX, remained out of the reach of the Serbian justice authorities. The trial proceeded with delays from 2009, some suspects were released from the detention facility on a written undertaking not to leave the place. After the verdict was announced, six suspects were released in the courtroom. During the trial, Albanians were assaulted by the hands of children and grandchildren of convicted persons against the deputy prosecutor for war crimes by Albanians.

The “Kosovo government” called the members of the Gnilan group “victims of the revitalized process”.

The Deputy Prime Minister of Kosovo, Hayretdin Kuchi, announced the government’s intentions to form a special National Integration Office, whose competence would include not only the Albanians of Kosovo, but also other Albanian-populated territories of Serbia. This project on the protection of the rights of Albanians in the south of Serbia was not adopted due to the lack of a quorum, but there is no doubt that it will be adopted soon. In the “Great Albanian Projects”, where politics and crime are closely intertwined, the Brussels Agreement of April 19 appears as one of the links in the long chain of “recolonization” of the Balkan Peninsula by Albanians .... Deputy Prime Minister of Kosovo, Edita Tahiri, is confident that “the agreement reached will have a positive effect on the Albanians in the Presev Valley” (1).

After the seizure of Kosovo and the planned ethnic cleansing of the south of Serbia, Albanians will begin to split up the Serbian national-territorial community in the Balkans further. The Pristina “laws” are ready to implement the terrorist units of the Kosovo Liberation Army, which are now officially operating under the guise of the Kosovo security forces and the Kosovo police (both are under the patronage of NATO).

In the south of Serbia, the mobilization of Albanians takes place under the flag of the formation of a new “political identity”, which, like the Kosovo regime, will be placed in the service of organized crime. It is well known for a long time that Kosovo serves as a transit highway through which organized transfer of large quantities of drugs is carried out, and not only local Kosovo authorities are involved in this activity. Most of the proceeds from drug trafficking are laundered here, in Kosovo, through such areas as real estate, retail, banks, casinos, trading companies (2).

The Kosovo authorities are paying generously to their international patrons at the expense of the seized (“privatized”) Serbian property: just as in April 2013, 75% of Kosovo Telecom shares were sold to German company AHOS GMBH; the metallurgical giant, the plant “Trepcha” with huge reserves of tin, zinc, silver, gold and rare metals is transferred to the hands of the American company NGP. In return, the Kosovo-Albanian mafia receives a blank check on the seizure of new Serbian territories in the Balkans.

Ctrl Enter
Noticed oshЫbku Highlight text and press. Ctrl + Enter
We are
From whom and why do Albanians flee from Kosovo?“Independent Kosovo”: global pathological crime
Military Reviewin Yandex News
Military Reviewin Google News
19 comments
Information
Dear reader, to leave comments on the publication, you must to register.