Some myths about Russia. Serious reasoning is not always in serious form. 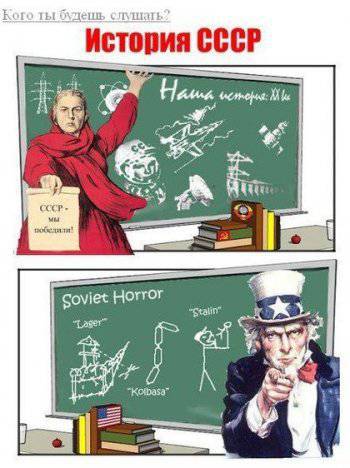 1. Myth one. In Russia there are liberals, the main of them are Nemtsov, Kasyanov, Milonov, Kasparov, Ponomarev, Gudkovs, Navalny and others with Chubais.


One of the first real liberals appeared in France, during the Great French Revolution. They sought freedom, equality, fraternity for the people, not for themselves. Many of them went to the scaffold for their ideas, although they could run. Or the war with half of Europe. And there were leftists, Jacobins, and rightists, Girondists. And what of the above surnames (Nemtsov and Co.) have to do with the people, except for the existence at his expense? And who can imagine that the above will not even go to the scaffold, but at least to the prison for the idea? Imagine the picture - Kasyanov and Gudkov (any) are asked to condemn them for preparing a coup and curse the usurper with their heads held high. Shchas! They will scatter, only slippers will dress! They do not remind you of the jackal Tabaka, running to Sherkhan (cartoon "Mowgli")?

In connection with the above, I propose once again to call these LIBERASTS until a precise definition has been found.

2. The second myth. Russia is sitting on the oil and gas needle.

Do not sit Russia! Dependence on oil / gas is, but not decisive. Defining the oligarchs. Thanks to liberastov, Kudrin and other Grefs from the detachment of Yegor Gaidar, most of the super-profits from the sale of hydrocarbons abroad remain abroad. And it’s necessary to figure out who is really addicted to this needle. I doubt that a long and large drop in oil / gas prices will be allowed. What, the Rockefellers will allow a decrease in their income? Yes, they are more likely to bomb their friends on the Arabian Peninsula! And the cause will be found.

We, however, that would really depend on this needle, it is necessary to withdraw only 200 billion dollars from the States. They will not leave more gold reserves, but can spend on the development of the country, well, keep a hundred billion in gold. Do the same with the euro and the pound. At the same time wean the oligarchic elites on the national wealth to fatten and transfer any difficulties with the profits from the wealth to the people. Imagine how much you can do at least twelve trillion rubles! And three trillion in the stash, in gold. This will be the oil and gas dependence.

Only this withdrawal will become far from a straw and may break the spine of the state economy. They will come the most severe crisis, of course, and we will get it. But we already got it, especially in 90. The Great Depression was hardly worse. And so what? There will be enough foodstuffs for us, and we have not passed the point of no return along the path of “liberalization”. They almost lost the habit of working, transferred a bunch of productions to other countries and paid for goods, including our money. But they will find the reason not to give it away.

3. The mystery and irrationality of people living in Russia, who lived in the Soviet Union. People, not "elite".

No more logical and rational in the behavior of the people! Here we put as an example the pragmatism of the population of the West, which consists in calculating the most advantageous behavior here and now, at least within a radius of a kilometer and for two days. And in our country it’s normal to just do good with the expectation that it will return in a month or a year. And maybe only grandchildren. Or maybe a complete stranger who will make a good friend of yours. Or maybe it will not return, but another will come, unexpected. Here we are calculating. Where did it come from? Until from instinct, saying that tea is not in the Canaries live and your support in others.

My grandmother, from the side of my father, in the village taught me to greet everyone, and if I can, I need help. Motivated, like mom, so that I was not ashamed. Grandmother from ordinary Orthodox. In their village, as in others, there was a so-called. "help". It was a certain type of work. It consisted in the general big work that a specific family could not cope with - to put a log house at home, to prepare firewood for a family without a peasant. At the end of the "help" they were helped, it was at the expense of helping. Mom of the Old Believers, lived hundreds of kilometers from the father's parents, so they also had a similar!

Of course there have been disruptions, the people are not perfect. Of course in our time a lot of bad and bad. Lot. But good and good enough. If people regain faith in themselves, then we move mountains. You know, if you think about it, it is really in our territories, in our nations, in our stories we are a separate huge civilization. This is not a speech and not a stamp. We are not East or West, we are on our own. It is necessary that we were more and more, and all at the same time.

Perhaps a little and exaggerate, but only for clarity.

Ctrl Enter
Noticed oshЫbku Highlight text and press. Ctrl + Enter
We are
"Mowgli" USA and the USSR: What kind of children brings ideology through cartoonsChess and politics. Match Karpov-Kasparov and the Orange Revolution
Military Reviewin Yandex News
Military Reviewin Google News
63 comments
Information
Dear reader, to leave comments on the publication, you must to register.