10 2013 June
108
For the past few days, the Transcaucasian countries have been following the situation that has arisen with the advent of operational-tactical missile systems in the region. According to a number of media reports, a number of Iskander-M systems have recently been located in Armenia. Such messages have become the reason for a number of high-profile statements of a not too friendly nature. The various forces of the region are trying to use the fact that the missiles were in Armenia to their advantage, but at the same time they interpret the latest events exclusively in such a way as to emphasize their own position. However, according to the latest data, such statements may have nothing to do with the real situation. 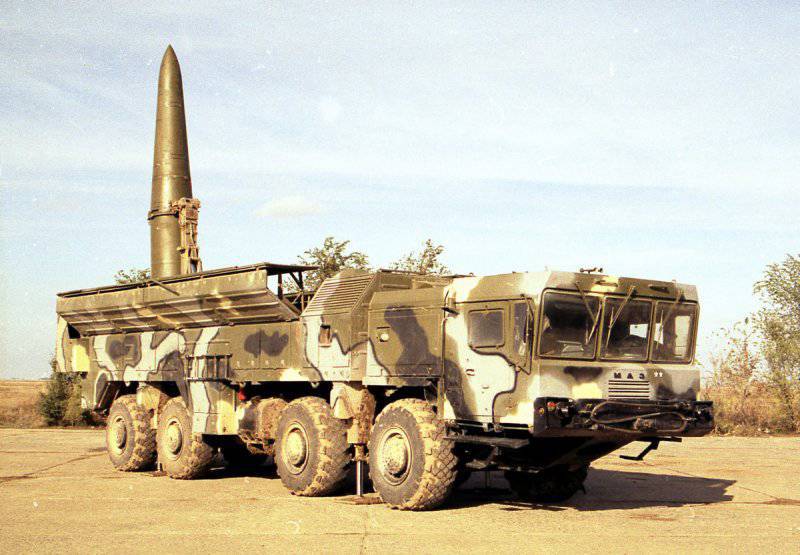 Back in the middle of last May, the Russian media outlets disseminated information about the active rearmament of the 102 Russian military base located in the Armenian city of Gyumri. With reference to unnamed sources, it was asserted that the military personnel of the base receive new equipment and in the very near future Iskander-M operational-tactical missile systems and Tornado multiple-launch rocket systems can be sent to Armenia. Information about the ongoing re-connection for some unknown reasons is not widespread. However, already in the first days of the month of June, publications appeared in which “Iskanders” were mentioned.

A few days ago, several foreign media outlets, including the Armenian ones, reported on the deployment of several Iskander-M missile systems in Armenia. The number of complexes and their goals were not specified. Due to the absence of official confirmation or denial of such information, various kinds of discussion and even speculation immediately began. The transfer of operational tactical missiles attracted the attention of politicians from the countries of the Transcaucasian region, and they did not miss the opportunity to turn the situation in their favor.

First of all, it is worth noting the Azerbaijani reaction to these events. Baku has not been friendly with Yerevan for a long time because of the disputed Nagorno-Karabakh and therefore any newsconcerning the armed forces of Armenia is perceived by Azerbaijan in hostility. As an example, the words of the deputy of the Azerbaijani parliament, A. Hajiyev, were given in an interview with the information agency Day.Az. In his opinion, the missile complexes available in the territory of the neighboring state are evidence of Yerevan’s aggressive intentions and are intended to intimidate Azerbaijan. In addition, some experts and the media have expressed the opinion that “Iskander” in Armenia should demonstrate the power of Russia to Azerbaijan, which is especially interesting in the light of recent disagreements.

Probably, such statements of officials are due only to the political situation in the region, but not to the situation around the missile complexes. It is unlikely that the differences between Russia and Azerbaijan are so great that the situation requires the transfer of Iskander-M to the Russian military base in Armenia. As for the transfer of these complexes to the Armenian military, the Armenian Ministry of Defense refutes information on the adoption of such systems. Thus, it turns out that the Iskander-Ms sent to the territory of Armenia will serve as part of the Russian unit and carry out tasks that do not include the demonstration of power to Azerbaijan. Probably, Russian missiles, if necessary, will be aimed at objects of another country.

It is not difficult to guess that the interests of Russia extend not only to Transcaucasia, but also to more remote regions. Thus, political scientists V. Yakubyan and A. Khramchikhin believe that the missile systems are transferred to Armenia not to intimidate Azerbaijan, but to put pressure on Turkey. Several years ago, official Ankara agreed to deploy on its territory some objects of the Euro-Atlantic missile defense system. Subsequently, these elements of the system were built and put into operation. It is known about the plans of Turkey and the United States to continue cooperation in this field. It is probably due to the active cooperation of the American and Turkish military that Russia is forced to send new missile systems to its base in Armenia.

It is worth noting that the Iskander complexes became an instrument of big politics in 2008 year. Then the former president of Russia D. Medvedev said that the answer to the objects of the Euro-Atlantic missile defense system on the territory of Poland would be the Russian tactical missile systems in the Kaliningrad region. At about the same time, Syrian President B. Assad proposed to deploy Iskanders on the territory of his country. Over the next years, the issue of locating missile complexes in relative proximity to various NATO military facilities came to the fore with enviable consistency, but so far the re-equipment of the missile units seems to be proceeding in accordance with the original plan.

In the event of the deployment of Iskander-M in Armenia, their area of ​​coverage covers almost all of Transcaucasia and large areas of nearby countries. In particular, Turkish military facilities located in the eastern regions of the country could be hit by Russian missiles. Thus, the missile systems at the 102 military base became an asymmetric response to the deployment of missile defense elements in Turkey. Earlier, Ankara was warned about the possibility of such a development of events, but she did not seem to listen to Moscow. As a result, a number of missile complexes went to serve in the territory of nearby Armenia.

If the version of “Iskander-M” in Armenia, which performs the function of political pressure on Turkey, is true, then recent events, among other things, indicate that Russia continues to promote its point of view. Since Moscow did not succeed in obtaining written guarantees from the United States and other NATO countries not to direct the Euro-Atlantic missile defense against Russian nuclear forces, our country is forced to take appropriate measures. This time, apparently, operational-tactical missile complexes were chosen as the pressure lever.