Africa is a territory of terror 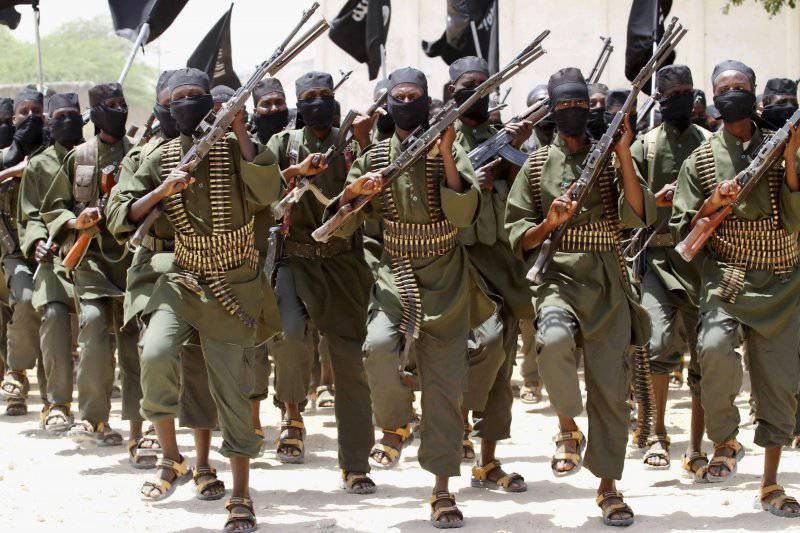 Until the end of 1990, Africa was a zone free of terrorism. Terror raged in various parts of the world, but the African continent did not know this phenomenon. The situation changed in 1998 after a large-scale coordinated terrorist attack in two countries at once - Kenya and Tanzania, when the US embassies in Nairobi and Dar es Salaam were attacked. The embassy buildings were destroyed, more than two hundred people died, more than four thousand were injured. (1) At the same time, only twelve people among these victims were Americans.


Nowadays, Africa has become the main arena of international terrorism. Today, there are dozens of major international terrorist organizations: the Al-Qaeda of the Islamic Maghreb, the Movement for Unity and Jihad and Ansar ad-Din in the Sahel region, the Jamaat Ahlis Sunna Liddaavati Wal-Jihad (Boko Haram) in Nigeria, "Harakat al-Shabab al-Mujahidin" in Somalia, "Al-Gamaya al-Islamiyya" in Egypt, "The Lord’s Resistance Army" in Uganda, pirate terror in the Gulf of Aden and Guinea ... Today the African continent is firmly covered by a network of terrorist organizations.

The Al-Qaeda of the Islamic Maghreb (AQIM) is an Islamist organization with the goal of overthrowing the Algerian government and establishing an Islamic state. The main members of the organization are Algerians, Tuareg and Moroccans. AQIM became the main force that organized the seizure of the territory of northern Mali and the attack on Bamako in January 2013. AQIM announced its creation in January 2007, having emerged from the organization Salafi Group of Preaching and Struggle. Its illegal activity was the basis for its inclusion by international organizations (UN, European Union) and a number of countries (USA, UK, France, Spain) to the lists of terrorist organizations. The main objectives of AQIM are to spread the ideology of global jihad, to unite all extremist groups in North Africa to overthrow the secular regimes there and to proclaim Islamic states. Militants AKIM organize and carry out armed attacks and terrorist acts against government officials and state bodies, energy infrastructure facilities, representatives of national and foreign companies. The activities of AIM touched Russia. Thus, in March 2007, in the Algerian province of Ain Defla, a citizen of Russia and three local residents were killed by AKIM bus instigators by a bus of the Russian company Stroytransgaz. In December, 2007, in the province of Medea, another vehicle was blown up, on which Russian specialists from Stroytransgaz were moving.

Al-Gamaya al-Islamia (GI) is an Egyptian Sunni Islamist movement that aims to overthrow the Egyptian government and create an Islamic state. In five years, the victims of GI fighters have become about 800 police and military personnel. After the so-called The “revolution” of 2011, the GI, was transformed into a political party that won 13 seats in the country's parliament. In Russia, Al-Gamaya al-Islamia is officially recognized as a terrorist organization.

“Harakat al-Shabab al-Mujahidin”, better known as “Al-Shabab” is a Somali armed group that controls a large territory in southern Somalia. A strict form of sharia law has been introduced on this territory. Officially, the goal of Al-Shabab is jihad against "enemies of Islam." However, in reality the organization is fighting with the troops of the African Union in Somalia.

“Jamaat Ahlis Sunna Liddaavati wal-Jihad”, better known under the name in the Hausa language “Boko Haram” (BH), officially opposes state laws and the “westernization” of society. BH was established in 1991 year and aims to establish Sharia throughout Nigeria. However, there are serious grounds for believing that the officially declared goals are not essential for BH. Thus, in the north of Nigeria, where the main part of BH is based, the Sharia has long been the official state law, although it applies only to Muslims. The desire to extend Sharia law to Christians is pure terror and has nothing to do with Islam. Sultan of the State of Sokoto, Saadu Abubakar, who is the spiritual leader of the Muslims of Nigeria, called the BH "an anti-Islamic sect" and a "disgrace for Islam." According to some reports, about ten thousand people have become victims of BH since 2001. At the same time, in addition to Christians, who are the main victims of the terror of BH, Muslims are also being killed, including clergymen daring to criticize the sect.

The beginning of 2013, was marked by a powerful activation of terrorist groups in Africa. Recent weeks bring news of all the terrorist attacks ... In April, the UN Special Rapporteur on human rights and the fight against terrorism called for urgent assistance to Burkina Faso in connection with the critical situation that this country is undergoing, under attack from terrorists. In early May, Boko Haram carried out a coordinated terrorist attack in three places at once (army barracks, police station and prison) in the city of Bama in Nigeria. In late May, already in Niger, there was a double terrorist attack on uranium mines in the city of Arlit. The scale of the attacks and the number of the dead became the basis for the declaration of three-day state mourning. Responsibility for the attack was claimed by the radical Islamist group Movement for Monotheism and Jihad in West Africa. (4)

A special feature of the activities of terrorist organizations in Africa is their high mobility, which is connected, in turn, with the state of the African borders: they are practically transparent, especially in the Sahel zone. Thus, the successful suppression of terrorism in Algeria at the end of the 1990s is in fact largely a result of the transfer of terrorists from Algeria to the north of Mali across completely transparent borders in the Sahara.

Terrorist organizations in Africa are increasingly becoming a united front. Thus, during the transfer of Nigerian troops to the territory of Mali, the militants "Boko Haram" engaged in battle with them, trying to resist them and not allow them to pass to Mali. At the last meeting of the UN Security Council on terrorism, the Republic of Togo, directly confronted with the threat of a new African terror, pointed out that some terrorist groups are already starting to form a “terrorist international”, taking roots in several countries at once, making it difficult at present to draw the line between international and local terrorism. The situation is aggravated by the fact that the activities of such terrorist groups pose a serious threat to the efforts of the international community’s peacekeeping missions. (5)

In the activities of terrorist organizations in Africa can be identified a number of features. First, terrorist groups impede, as already mentioned, the work of the UN and African Union peacekeeping missions. Secondly, the terrorist threat in Africa is a product of a merging of political and religious extremism with organized crime. Africa can turn into a reservoir of recruiting, training and financing terrorists outside the Black Continent. Finally, terrorists can seize control of such strategic resources as oil, uranium, diamonds, etc. The activities of terrorist organizations in Africa are discussed today in the UN Security Council (Al-Qaida of the Islamic Maghreb, Ansar ad-Din) ") And in the International Criminal Court (" Lord’s Resistance Army "and" Boko Haram "), but this does not give any result. So, despite the fact that the Government of Uganda, the International Criminal Court, and the UN Security Council are still fighting against the Lord’s Resistance Army, they still cannot arrest any of the leaders of this organization, in respect of whom international arrest warrants have been issued.

It is impossible not to notice that almost all the major terrorist attacks were the basis for the intervention of the West in the affairs of African states. The attacks on US embassies in Kenya and Tanzania in 1998 gave rise to US bombing of Sudan. The terrorist attack in Lockerbie was the basis for the bombing of Libya. Terrorism in Mali was the basis for the invasion of France. It is also noticeable that African terrorist organizations, officially fighting for their own, have a common line of action - the fight against peacekeeping operations conducted by the African Union. Hence, it can be assumed that the spread of terror serves the solution of someone's task to prevent the Africans from taking over the settlement of conflicts on the Black Continent.

(1) See UN Security Council Resolution No. 1189, adopted on 13 on August 1998, in connection with these terrorist acts.
(2) Unified federal list of organizations recognized as terrorist: Official site of the National Anti-Terrorism Committee of the Russian Federation: http://nac.gov.ru / document / 832 / edinyi-federalnyi –spisok –organizatsii –priznannykh –terroristicheskimi –verkhovnym-sudom-r. html
(3) The Decision of the Supreme Court of the Russian Federation of 13 in November 2008 of N NCPU 08-1956 states: “Recognize the international organization“ Al Qaeda in the Islamic Maghreb countries ”as terrorist and prohibit its activities in the territory of the Russian Federation”. (The full text of this decision can be found at: http://nac.gov.ru/content/3936.html).
(4) See. Commentary of the Information and Press Department of the Ministry of Foreign Affairs of Russia in connection with a double terrorist attack in Niger, // Official website of the Ministry of Foreign Affairs of the Russian Federation: http://www.mid.ru/brp_4.nsf/newsline/9B00B 034004 E85F0 44257 B780054XXXXXXXXXXXXXXXXXXXXXXXXXXXXXXXB .
(5) Concept note by the Permanent Representative of Togo to the UN for a briefing in the UN Security Council on the fight against terrorism in Africa in the context of maintaining international peace and security from 13 May 2013, // UN document: S / 2013 / 264

Ctrl Enter
Noticed oshЫbku Highlight text and press. Ctrl + Enter
We are
A side child of capitalism. The phenomenon of "Boko Haram"Taliban in Nigerian. As the richest country in Africa comes to civil war
Military Reviewin Yandex News
Military Reviewin Google News
14 comments
Information
Dear reader, to leave comments on the publication, you must to register.