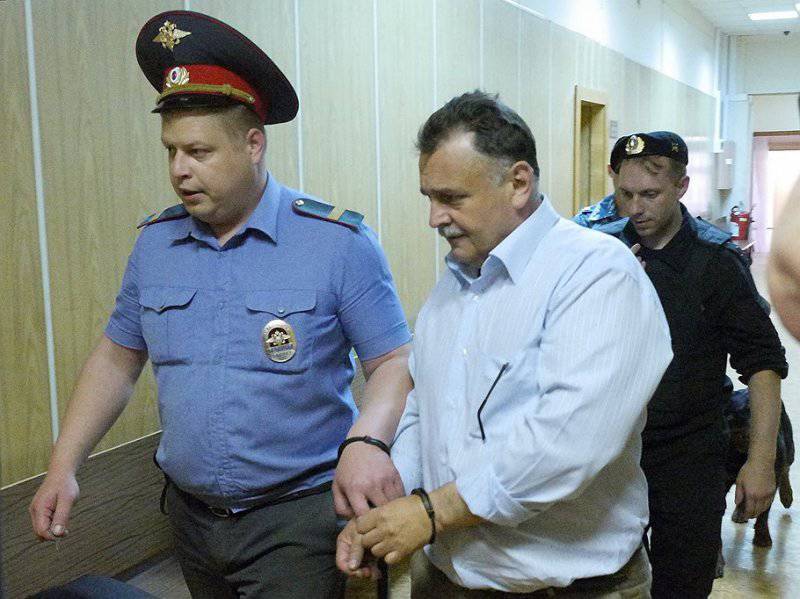 In Moscow yesterday, former director general and chief accountant of the Federal State Unitary Enterprise "St. Petersburg Engineering and Technical Center of the Ministry of Defense of the Russian Federation" Valery Sedov and Irina Petukhova were arrested. TFR suspects them of fraud and embezzlement at the conclusion of transactions with the military department. Earlier, the Federal State Unitary Enterprise was led by the son-in-law of the former defense minister, Anatoly Serdyukov, Valery Puzikov. The investigation expects prisoners to testify and his involvement in the scams.


Valery Sedov and Irina Petukhova, who lived in St. Petersburg yesterday, were summoned for a regular interrogation to the main military investigative department (GVSU) of the TFR in Moscow and were detained. According to the official representative of the TFR, Vladimir Markin, they are suspected of having committed two crimes, provided for by part of Art. 4. 159 CC (fraud on a large scale), and two - h. 4 Art. 160 UK (especially large waste). Yesterday, the cases under these articles were merged.

According to the GVSU TFR, in order to conclude N64 and N65 contracts with the Defense Ministry for service from December 2009 to August 2011 of military vehicles, FSUE had to provide a bank guarantee in the amount of 10 million rubles. The corresponding amount was transferred to the bank "St. Petersburg", but it did not stay there, because on the instructions of Mr. Sedov it was soon transferred to the account of the one-day firm Stroyresurs, cashed, and the money was appropriated.

ABOUT THIS ON TV CHANNELS

The second episode of fraud is associated with the allocation of a Toyota Land Cruiser SUV for the needs of the Defense Ministry’s central office. By car, rented by the military for 1,1 million rubles, according to the documents, the generals were taken from June to December 2011, but the GVSU TFR found that the SUV could not be used because its state number was destroyed by the state traffic inspectorate as early as 2008.

Military inspectors considered monthly premiums to Valery Sedov for the total amount of 2 mln. Rub. and payments to a bogus secretary for 1,5 million rubles.

Justifying the need for arrest, the investigator brought standard arguments to the court, indicating, in particular, that even during the searches carried out at FSUE in 2012, the suspects allegedly instructed his subordinates to destroy or hide the documents.

Lawyers for the suspects, in turn, argued that the Main Armed Forces TFR generally should not investigate the case of their clients, since they are not military men, but purely civilians. Moreover, GVSU should not apply for their arrest in a Moscow court, since the alleged crimes were committed in St. Petersburg.

After the court arrested Irina Petukhov, Valery Sedov nevertheless asked for his release "on a small bail", but he was also identified in the pre-trial detention center until July 19.

Lawyers and lawyers of the Federal State Unitary Enterprise are sure that there were no elements of a crime in the actions of prisoners. According to them, an account for transferring 10 million rubles. indicated the clients themselves - officials of the Ministry of Defense; the size of bonuses to the manager and the procedure for their payments were determined according to the charter of the enterprise itself, and a fictitious post was created forced to receive funds to pay for washing the general's machines. As for the alleged fake SUV, the problem was only in the replacement of its license plate. The old one was really destroyed a few years ago in order to install a new “thug” at the client’s request - about 001 sa.

On the sidelines, participants in the proceedings said that new prisoners in the framework of the Oboronservis case needed the Main Building Office of the TFR to get evidence of the guilt of the husband of the sister of the former Federal Tax Service and the Defense Ministry Anatoly Serdyukov Valery Puzikov, who from 2007 to 2010 headed FGUP St. St. Petersburg Engineering and Technical Center of the Ministry of Defense of the Russian Federation ". It was under Mr. Puzikov that the Federal State Unitary Enterprise managed to conclude, and then roll over contracts worth tens of billions of rubles associated with servicing the Ministry of Defense by road. At the same time, the machines were not allocated by the enterprise, but by one of the military units. Subsequently, it was liquidated, transferring, thanks to Anatoly Serdyukov, transport to the FSUE balance sheet.

The criminal case on these facts (part 4 Art. 159 CC) was initiated in 2012 year. Within its framework, Mr. Serdyukov and his close friend, the former head of the Department of Property Relations of the Ministry of Defense Yevgeny Vasilyev, were interrogated, but they refused to testify, referring to Art. 51 Constitution. Now, the investigation expects to get at its disposal witnesses already from among the prisoners in the SIZO, and not under house arrest, like Ms. Vasilyeva.

Ctrl Enter
Noticed oshЫbku Highlight text and press. Ctrl + Enter
We are
Son-in-law Serdyukov himself appeared to the investigatorSerdyukov's son-in-law may be wanted
Military Reviewin Yandex News
Military Reviewin Google News
41 comment
Information
Dear reader, to leave comments on the publication, you must sign in.