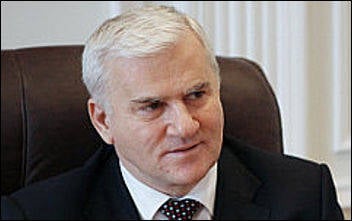 Arresting the mayor of Makhachkala, the federal authorities took only the first step from the abyss


They say that the mayor of Makhachkala, Said Amirov, who led the city since 1998, was the second most powerful man in the North Caucasus after Ramzan Kadyrov. Of course, there was a very large gap between them, but Amirov was second in this list. And in Dagestan everyone had an understanding that he, like Kadyrov, was simply unable to resist. And now Amirov was arrested, taken to Moscow and charged with organizing the murder of investigator Arsen Hajibeyov, which occurred in December 2011 of the year.

One can judge about the influence of Amirov by the procedure of arrest: he was taken “where he should” not by an ordinary paddy wagon, but by a helicopter, who sat on the square right in front of the mayor's office. They were afraid that they beat off along the way? In the glorious city of Makhachkala, there were all sorts of excesses, this is not Moscow for you, there are regular explosions there, as in all of Dagestan. It is curious that at the same time the explosions did not prevent Amirov from getting the title of “the best mayor of Russia” at all. But if he is the best mayor, then, it turns out that the city with constant terrorist acts headed by him is also the best in the country? But can not be under the authority of the best mayor is not the best city? ..

And in 1998, supporters of the late authoritative figure Nadirshah Khachilaev, after an exchange of fire with guards, seized the building of the State Council of the Republic in Makhachkala and held him for 24 hours. So the precaution with the helicopter was probably not superfluous.

But back to today. Observers have long noted that between Said Amirov and the newly appointed President of the Republic, Ramazan Abdulatipov, there are, to put it mildly, uneasy relations. They were formed long ago, and Moscow could not have been unaware of them, putting Abdulatipov to the post. They also said that earlier all the candidates for the presidency in one way or another almost agreed with Amirov, who knew how to get along with all the Dagestan clans. At the same time, his opinion was not interested. And it was not clear what will happen next.

The end came on June 1. Abdulatipov won, although formally everything was furnished without his participation: on this day he was at a football match in Chechnya. Everyone understands that the decision to arrest Amirov was not made by him, it was approved in Moscow at the very top and means dismantling the existing system of power in Dagestan: first they removed the former president, transferring him to work in Moscow, then Amirov under two months arrest, and there it will be seen . Supporters of Amirov declare his innocence and demand a return to the position, but it is clear that he will not return at any outcome of the case.

The grounds for the arrest of Amirov gave evidence of a witness who, according to rumors, was tried yesterday to be killed in the Pyatigorsk SIZO - to hang. Later, the UFSIN of the Stavropol region refuted this information. “The information about the attempted murder of Magomed Abdulgalimov in the SIZO is not true. A person with such a name did not enter the Pyatigorsk SIZO at all, ”said the representative of the department.

The Izvestia newspaper sent correspondents to Makhachkala, who learned some interesting details from the life of Said Amirov. So, in his native village of Dzhangamakhi, located in 100 kilometers from Makhachkala, he speaks exceptionally well, describing him in superlative degrees. Near the village behind the hills is located the most luxurious suburban complex of the mayor of several buildings, modestly called “summer cottage” and occupying almost the same place as the village itself. Journalists are not allowed to drive to the “dacha”, blocking the road with cars, they are also advised not to take it off in order to “not annoy people”. But a couple of pictures still falls on the pages of the publication.

In Makhachkala, a veteran of the Ministry of Internal Affairs who asked not to be named after him tells how Amirov began his work. “I have been following him since the 1970's, since the heyday of the Union. This Amirov then you know what to do? Sheep wool. The receiver was. Spun quickly. He was still a young boy, 19-20, and they wrote us reports to the police that he brought the necessary money to KamAZ people, earned money on wool so that they would not interfere with their business, said a former Dagestan police officer at a meeting in a tea room. - But we were not allowed to touch him. The militia leadership has always pulled back: do not go on your head, it's none of your business. ”

Amirov harvested wool in Dagestan, then in Kalmykia, he lists. Twice the wool he had collected burned to the ground right in the warehouses, and he himself and the money intended to pay for the raw materials disappeared somewhere without a trace. The second fire allegedly killed the brother and uncle of the future mayor, while Amirov himself was in the all-union search.

And shortly before the collapse of the USSR, Amirov reappeared in the republic and immediately found himself in government circles - he led agriculture, then he became deputy chairman of the republic’s government, from which he became a deputy and was elected mayor of the Dagestan capital at the end of 1990's.

Residents of Makhachkala refuse to talk about Amirov, but the brother of investigator Arsen Gadzhibekov, who is suspected of being involved in the murder of Amirov, does not choose expressions in a telephone conversation. When the correspondent says “your mayor” into the phone, he explodes: “He is not my mayor and not our mayor! He is the leader of a gang of murderers and robbers. ”

Political analyst Alexei Mukhin told the newspaper "The View" that the arrest of Amirov could be the beginning of large-scale changes in Dagestan. The organizers of this action threatened not only the figure of the mayor of Makhachkala, but also the order of management that was formed in the post-Soviet years in the republic. Many public expectations are connected with the arrest of Amirov. Expectations that the federal government finally began to restore order in the republic.

“Amirov’s supporters will try to turn the tide in their favor. In the first place, they will certainly try, through lawyers, to change his measure of restraint. In addition, it is possible that an attempt will be made to disintegrate the charges by refusing the defendants in the case of the previously given testimony. As for the new arrests and detentions, they are not excluded. First of all, apparently, far from all those involved in the Amirov case have been detained. Secondly, it is possible that there are other, equally significant, bureaucratic and business figures at the sight of law enforcement agencies who were involved in various abuses, ”the expert says.

Yesterday attempts to release Amirov from custody have already followed. The lawyers said that he simply could not be imprisoned because he was a wheelchair user and was unable to serve himself. In addition, he suffers from insulin-dependent diabetes. Meanwhile, if his guilt in the murder of the investigator is proved, Amirov faces life imprisonment.

The United Russia party, to which the former Makhachkala mayor belonged, said today that she would not exclude him from their ranks until the situation was clarified.

Today, the head of the Investigative Committee, Alexander Bastrykin, said that the operation to arrest Amirov had been preparing for almost two years, and it would take “more than one month” to further investigate. “We have been preparing for this operation for almost two years so that it will be successful,” said Bastrykin, speaking at an anti-corruption forum in the Accounts Chamber.

At the same time, Bastrykin admitted that the investigation "still has a lot of work to prove a number of serious crimes that were committed in this republic by this organized group, in fact, a criminal community." According to him, "this is not the work of one month." Together with Amirov arrested more than ten of his accomplices. Charge Amirov may be brought today.

From Makhachkala, meanwhile, it is reported that no special disturbances have been noted about the arrest of Amirov. But anything is possible. How tightly the Amirov clan has entangled Dagestan can be judged from listing the posts that the relatives of the arrested mayor hold. So, according to Izvestia: “The sister of Said Amirov’s wife, Perziyat Bagandova, is a member of the People’s Assembly of the Republic of Dagestan, a member of the committee on health care and social policy. One son of the mayor, Magomed Amirov, is a deputy of the People’s Assembly of the Republic of Dagestan, the other, Dalgat Amirov, is the head of the bailiff service of Dagestan. The brother of the mayor Magomedsalam Amirov works as chairman of the Kirovsky District Court of Makhachkala. Two relatives of Amirov’s nephew are deputies of the State Duma of the Russian Federation: Jamaladin Hasanov is a member of the CP faction, Magomedkadi Hasanov is a United Russia party. ”

To cut this tangle is difficult, but probably you can. More precisely, it is necessary. Well, if the Kremlin will have the strength and political will for this, time will tell. There is not much time for that. “The first beginnings of the Syrian scenario actually appeared in the republic,” journalist Musa Musayev warns on the pages of the Caucasian Politics website. And he knows what he is talking about.