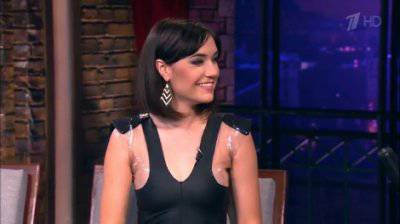 Gave a word not hysteria here anymore. Not a ride. I apologize, maybe somewhat off topic, but not the word that caught fire in one place.


The fact that everything is not smooth in our culture is a fact. As if a reflection of the brain, alas. Mr. President speaks about the loss of moral values, the need to work in this important issue ... not, says everything correctly. Sense of something? In general, it seems that Putin, as an individual citizen, needs one thing, and the others need another.

Saturday. Evening. Prime time. "Evening Urgant". On the air, Ivan said that during the entire existence of the program there had not been such a large number of applications for seats of spectators in the studio. He even asked the operators to show the whole crowd, consisting of different genders, races and ages. Well, people, of course, did not lose their head: they smiled, shouted, clapped and got up. On the face of everyone there was happiness and affection, that they see firsthand and are in the same place with their idol ...

It seems that there is nothing bad in it, and it is unlikely that anyone will see this as bad ... However, no one else was sitting at a party like Sasha Gray. That's what blew me away! Some kind of overseas whore caused such a big stir among the masses. Along the way, her tour of Russia was greeted by crowds of fans, with great pleasure they took autographs, interviews, invited to TV shows, to meet with Russian celebrities.

What everyone has forgotten, what is she famous for ?! Let me remind you: she took over9999 members to herself in everything so to speak, natural holes.

Returning to the audience in "Evening Urgant", I am sure that these ardent admirers of Sasha Gray's work do not go to Saturday work, they do not lay flowers on the Eternal Flame on the ninth of May: there simply is not enough time. Yes, and not really something necessary. But look at the American give-away - there is always!

The most terrible thing is the conclusion in people’s minds: it’s better to be a bastard and do bad deeds - there is more money and fame than to be good-doing, at least as far as possible.

To prevent such thoughts from settling reliably and permanently in people's heads, all you need to do is review the priorities and answer the simple question - who is dearer to you: American whores or local heroes?

And one more question arises: are they people at the helm of information space? He, of course, Ivan, but still Urgant. And, clearly more Urgant (or Milinder, if biographically), than Ivan.

Is the hero of a twenty-second clip in the newswho rescued a child from the fire or a designer of aircraft (helicopters, tanks, why not care, we have thousands of them) less worthy of the attention of Channel One than this ... female?

And then we are surprised, but why is it looking at us like this in the world?

Who and for whose money continues to form the image of a Russian person?

And where do we sail with such an approach?

There are a lot of questions, but for some reason the answers are mated only with the prepositions "in", "to" and "to".

Ctrl Enter
Noticed oshЫbku Highlight text and press. Ctrl + Enter
We are
About Stalin and KhrushchevWhat you didn't want to know about England
230 comments
Information
Dear reader, to leave comments on the publication, you must to register.