Death as a way of life 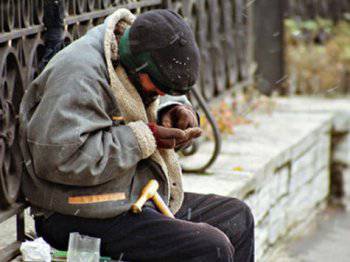 In Russia, as in war: you leave home - and you do not know whether you will return. Our constitution was written with forks on water, and only one of all civil rights is the right to death. Premature and ridiculous. This West is rotting from oncology and Alzheimer's, in Russia, forever young, always drunk, the hippie slogan triumphant: “Live fast, die early!”


The country occupies the 175-place in the world in terms of the physical security of citizens. For this dry formulation - people at the bus stop, smeared on the asphalt with a drunken hoe, patients slaughtered on the operating table, like Christmas turkey, killed by frost that fell from the roof, shot down at pedestrian crossings, poisoned with fake vodka, those who went outside - and as if dissolved in the air, the victims of bandits, who are afraid even by the police, and the victims of policemen, which are sometimes difficult to distinguish from the bandits.

Add to this inedible products, fake medicines, expired baby food, polluted water, crumbling like a house of cards, emergency housing, disbanded hospitals, “killed” roads, drug addicts who will kill their mother for a dose - not like a random counter, - and It’s not a country, but a hospice. But between the doomed there is neither brotherhood nor sympathy. Alien death causes them to curiosity at best. But more often you can hear: “I am guilty myself!”, Behind which is the eternal “I am not my caretaker to my brother!”

Reforms that have turned healthcare into a burial site have reached psychiatry. According to internal instructions, patients in mental hospitals are held no more than three weeks, and for returning to the hospital earlier than three months, the doctor is fined. So the expression "madhouse", which is applied to Russia in a figurative sense, can soon be used in the literal. The country leading in the world in terms of the number of mentally ill people will be flooded with undertreated schizophrenics and paranoids, dangerous for the surrounding madmen, who were discharged from fear of superiors.

Those who made new laws are not threatened to become a victim of a madman with a razor in his hand, they have security and a motorcade. And the rest are themselves to blame.

The girl came to the police with a statement on the pursuer: the guy walked on her heels, showing the knife, which he always carried in his pocket. Despite the fact that he was registered in the PAN and was clearly not in himself, the doctors and policemen shrugged: “He didn’t break anything ...” And after a while the guy thundered behind the bars: for cutting another girl with a knife on his way.

“I think with horror what old age is waiting for me in our country,” a friend once shared.

And the other day he was killed, returning from the capital club: the robbers, having attacked in the crossing, hit him with something heavy on the head. For iphone and laptop. Before retirement he remained 27 years. The police, refusing to “unsolvable” crime, wrote in the protocol: “a head injury was received from a person falling from a height of his own height”. And the surrounding responded to the eternal: "Himself to blame!"

If it is so dangerous at night, even in the very center of Moscow, and everyone knows about it, why are there no official statements from the police? Strengthening the patrol? In the "cannibalistic" Union, it was possible to walk without fear at night, in modern Russia - and in the afternoon it is terrible.

Moscow is the Wild East, without a trunk and a knife it is dangerous here. At the Komsomolskaya station, drugs and fake documents are sold practically in front of the police. In the capital, even during the day, you can get a "feather" in the side of a respectable citizen for parking in his place, or get a bullet in the forehead because of a scratch on the car. How many such cases have flashed in the news, and how much is left behind the scenes?

But they will say: “Themselves to blame!” They didn’t go there, they didn’t say it, they did it wrong. Or maybe they didn’t live there?

A year and a half my husband and I spent in a small Kaluga town, more like a village. Men here have long been listed in the Red Book, and in the surrounding villages - and all the kingdom of India. On ten houses one peasant, and every month a new death.

It is impossible to walk down the street without seeing the coffin lid, leaning against the house, or mourning flowers scattered along the road, or a black widow's handkerchief on a woman who was walking with her husband yesterday. And among the dead are men, men, men ...

Cancer at thirty? Heart attack at forty? Those who have lived to fifty in Russia need to issue an order, because the pension for men is unattainable than the kingdom of heaven.

Male mortality takes the scale of a national disaster, the country has the largest gap in life expectancy between the “weak” and the “strong” gender, and even the residents of Zimbabwe and Somalia are not jealous of the health of our men. From TV screens they scare GULAGs and famines, depicting the horrors of Soviet totalitarianism, but there is nothing for the GULAG to fear who has the GULAG around.

In the USSR, people were cogs of the system, in modern Russia we are superfluous details.

Extreme life of a Russian person is a daily struggle for survival, maneuvering between “it’s impossible to live this way” and “it’s impossible to live this way”. If the metropolitan hospitals are offices for siphoning out money from the population, then the provincial hospitals are simply the shortest way to the next world. It happens that the doctors here, on duty for three days in a row, operate without anesthesia and treat all diseases with green paint and bandage - for there is nothing more. In small towns, maternity hospitals are closed, but morgues function well. And what else does an endangered country need?

It seems that we have found “Russia that we lost”: this is the 21st century in Moscow, and after the Moscow Ring Road - XIX. And the guilty ones who live there without guilt, who themselves work in the hospital for pennies, are sick themselves, and they die like flies themselves. Themselves to blame - and the point.

In a series of deaths that passed before my eyes in the Kaluga province, one case simply asks for a note. A young guy, having quarreled with his wife, went to drown grief in a glass. Vodka turned out to be burned, the company was doubtful, and the cigarette that had not been extinguished did the job: three bodies were found in the burned apartment. At the commemoration of friends, emptying the available bottles, went to the store for an additive. But we arrived only to a deep ravine, where the list was replenished with four more dead men. Total seven young men who were not counted for a few days the city.

“Themselves to blame, it was not necessary to drink!”

And how not to drink when there is no work, the factories are closed, the collective farms are collapsed, and the land is bought up by Muscovites who bring in slaves from former fraternal republics for their processing? They live in unheated cabins right in the field and their wages are most often beaten-up — taking away their passports, the owners of their lives turn workers into hostages. Undressing on a hot day to the waist, Asians scare the village with their bones and their knees turned out like an Auschwitz prisoners.

But who will regret strangers when they don’t feel sorry for their own?

Our gene pool is rotting under our feet. Chosen, deceived, useless tramps, victims of circumstances, “black realtors”, financial pyramids or government reforms, they drink and drink alive and die at the hands of bomzhanters.

"This is their choice!"

10 years ago in St. Petersburg conducted a study among the homeless: 75% of the homeless had a higher education (less purchased diplomas and stolen dissertations in the Russian parliament less). They are not needed either by the authorities or the opposition; they are not needed by the communists, the liberals, the monarchists, the patriots and the cosmopolitan; they are not covered by the slogan “Freedom. Equality. Brotherhood ”, and“ Russia for Russians ”is also not for them. One and a half million extra people who are to blame.

And all this is so usual and ordinary that does not cause us any emotions.

Only the last couple of years, we have ceased to die out - and then solely at the expense of migrants who flooded the country. But after all, someone needs to populate emptying territories.

Car accidents are carried away annually by the population of a small town, as many die at the hands of murderers in white coats, twice as many at the hands of criminals, up to a hundred thousand go missing, in twenty years almost a million people laid hands on themselves, and the number of teenagers and young people who died from drugs, scary to say out loud.

But we don’t feel sorry for them all. These are their problems. This is their choice. Died by their stupidity. Killed at their own request.

Ctrl Enter
Noticed oshЫbku Highlight text and press. Ctrl + Enter
We are
Comparison of the current Constitution of the Russian Federation and the Stalin Constitution 1936 of the year.My humble experience (survival instruction)
Military Reviewin Yandex News
Military Reviewin Google News
124 comments
Information
Dear reader, to leave comments on the publication, you must sign in.