"Thank you grandfather for the victory" and not only about that 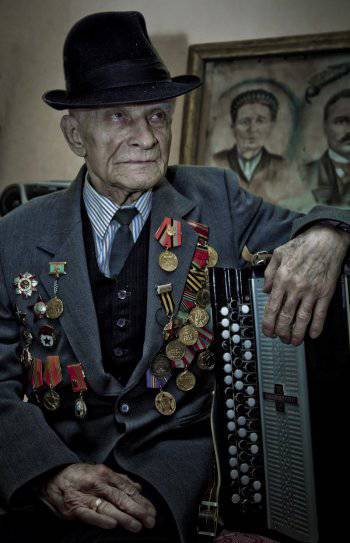 This morning I walked on the square in our Moscow region military town with a 3 month old child who was sleeping in a wheelchair, and observed the following picture: an old grandfather walks near the bushes, sees nothing and grooves his way in front of him. And it moves as if from the side, to nowhere. On the square in the morning there are few people, but young mommies with children and rare passersby walk. All anything, but that's just all the grandfather somehow do not care.


I went up to him and asked: "Grandfather, will you take somewhere?" And he answered me: “Oh, son, I want to go to the store, yes, I got lost. I didn’t leave the apartment for half a year, so now I have to take a walk, and buy something. I went through the whole war, and then I got lost at home at myself. " I bring it to the store and continue to take sunbathing with my daughter. Near the sandbox, one young mother asks: "Has this grandfather come to visit you?" I answer her: "No, this is a veteran of World War II, local, blind." The saleswoman then takes him out of the store, and the guestbook is trying to get through and gently bypass the veteran of a guest worker from Central Asia. The seller asked him to bring the grandfather to the house and went to the workplace. Djigit led him to the end of the stairs and on his own business. Grandfather wandered through the square and again began to get lost in the environment. The people on the square popribavilos, but to the misfortune of an elderly person also remained indifferent.

I came up again and asked: "Grandfather, where do you live? Let me see you off!" It turned out that he lives nearby, meters in 400's. Taking him by the elbow, I with the stroller in one hand, with the veteran in the other, set off. Along the way, he told me about his partisan detachment, on which front he fought, who was his commander, how he studied as a sniper, then got to mortar, how they took a small German city and half of the personnel mowed down German machine gunners. It turned out that he knows all the commanders of the military unit in which I serve, starting with the very first. How he worked here as a welder, how many worked in the service of IES. That he has children, grandchildren and great-grandchildren, but they do not come to visit him.

I brought him home, sat down on a bench to rest, wished health, long life, thanked for the Victory and went about my business further. I’m going, I think, and it was so insulting for our veterans, and so ashamed of the people around them. They are remembered only once a year on May 9. Even if native people visit them occasionally, then the rest of them are not needed. And about others, I have already said above.