"Relationship" is not under the charter 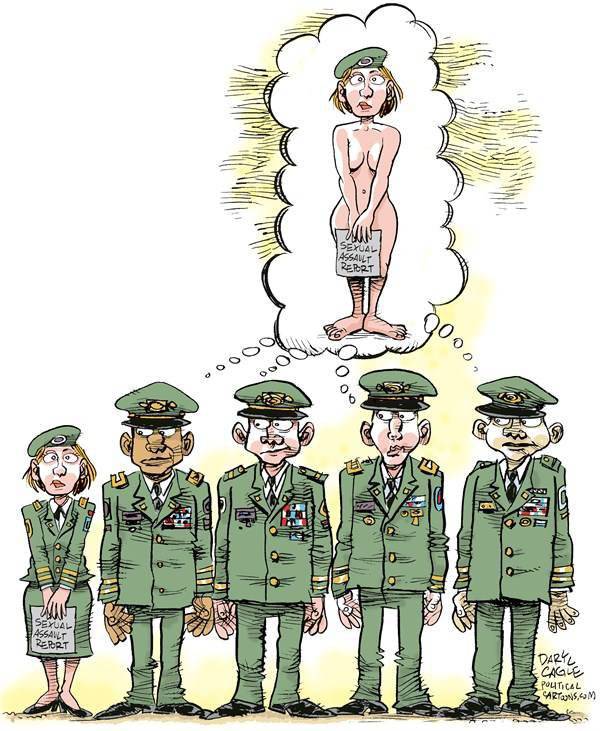 Today, perhaps, except that the lazy does not talk about the problems of sexual violence in the US armed forces. Foreign social networks and blogs are full of various caricatures covering the “non-statutory relations” in the US Armed Forces, users are actively discussing a sensitive issue. US President Barack Obama is also no exception. After another sexual scandal involving the US military, he stated that the problem was so deeply rooted in the ranks of the country's armed forces that its solution would require "efforts from the best US military personnel." Army chief of staff, Army General Raymond Odierno, added that "the time has come to make the fight against sexual violence and sexual harassment our main task."

And indeed, over the past 20 years, the level of sexual violence in the US military has increased significantly. The Pentagon estimates that over the 2012 26 military personnel have been the victims of “unwanted sexual intercourse” in 000, which is a third more than in the previous year. However, only 3,4 thousands of similar cases per year are reported to higher authorities.

Moreover, over the past month, as a result of the sex scandal, Brigadier General of the US Army Brian Roberts, who was part of the leadership of the military base in Fort Jackson (South Carolina), was removed from service. 17 May this year Darin Haas, head of the sexual assault prevention service at the Fort Campbell military base (Kentucky), was fired. He was accused of threatening his ex-wife. Earlier, near the Pentagon building, Lieutenant Colonel Jeffrey Krusinsky, the head of the sexual assault unit in the US Air Force, was detained. He was accused of pestering a woman while being drunk. In addition, an investigation is underway regarding Sergeant First Class Gregory McQueen, who was also responsible for preventing sexual offenses at Fort Hood (Texas). McQueen was accused of rape and forced prostitution.

It is worth noting that in the US military there are laws that quite severely restrict the sexual freedom of servicemen. According to Article 134 of the United States Code of War Laws, adultery is considered a crime. The article covers cases in which a soldier of the US Armed Forces engages in sexual relations with someone, provided that one of them is married or married. According to the charter of the American army, coordinated sexual relations with subordinates are also considered as its violation (not to mention violence).

What is the reason for such a surge in sexual activity in the US Armed Forces?

Corey Schake, a research fellow at Stanford University and an assistant professor at the United States Military Academy at West Point, believes that the reason should be sought in many years of military conflicts that adversely affect military personnel and their families. “Some of the wrong decisions we see are the result of fatigue. For a long time people constantly demanded something, and there was simply no time to somehow settle their own affairs. But this by no means justifies these wrong decisions, ”she says.

Veterans and officers of the US Armed Forces also believe that the current situation in the Armed Forces is due to continuous armed conflicts outside the country. However, they note that after the next round of austerity measures introduced in connection with reductions in the military budget, the military men fall into a state of despair. "Nerves are on the edge, and alcohol abuse only aggravates the problem," say US veterans.

Other US analysts are reminded that the US military is staffed on a contract basis and makes up one percent of the country's total population. Therefore, the army to some extent reflects the realities of civil society. They are also concerned that the lifestyle of the military leadership may push their subordinates to inappropriate behavior, and the impunity of top military officials only exacerbates the situation.
Currently, women make up 14 percent of US regular troops, and this trend has persisted for several years. Many military personnel believe that the presence of women in the army deprives them of their work — and the opportunities for promotion — of some of their male colleagues. The difference in ranks can exacerbate the problem, because the higher-ranking male servicemen are used to using their power to illegally seek relationships with their female subordinates.

US President Obama and the Chief of Staff of the US Army Odierno believe that the problem is also in the capacity of personnel who are called upon to combat sexual violence in the US Armed Forces (which, by the way, is confirmed by recent sexual scandals). According to them, these are the people who did not show themselves on the battlefield or did not take part in military operations at all. Often these are bona fide officers who perform valuable work, but they are still not the best representatives of the US Army.

Thus, the issue of sexual harassment is very acute in the US military and is under the scrutiny of the media and society. Gradually, the problem comes to the fore and, apparently, the US military-political leadership does not know how to solve it. If the trend continues in the near future, then, according to many experts, the level of combat readiness of the armed forces, as well as the moral and psychological state of the personnel, will significantly decrease. The main task of the armed forces, according to President Obama, in the near future may be the solution of internal problems, and not the preparation of units for new local conflicts. Probably, many leaders of countries are now relieved ...

Ctrl Enter
Noticed oshЫbku Highlight text and press. Ctrl + Enter
We are
A great interview with Sergey Lavrov: about Ukraine, Obama and IranWhat you didn't want to know about England
Military Reviewin Yandex News
Military Reviewin Google News
20 comments
Information
Dear reader, to leave comments on the publication, you must to register.