The ideal state of white lilies Russian about Finland for Serbs, Bulgarians and Turks 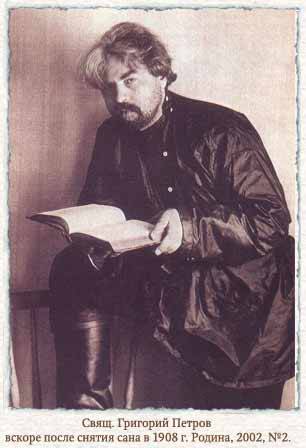 This year marks the 90 years since the release of the book of amazing fate. The author is Russian. Written about the former Russian province. We are practically unknown, although there are countries where this book has been republished many times, it has become a bestseller, a desk reading by politicians ...

In 1907 in an interview with the Parisian newspaper L'Humanite Vladimir Ilyich Lenin called out Grigory Petrov Spiridonovich "A very popular demagogue." Surely he uttered these words with a wry grin. There were elections to the Second State Duma, Petrov and the Social Democrats (including the Bolsheviks) competed for the proletarian electorate. At the same time, Petrov in the Petersburg suburbs knew more than all Leninists combined. He was a priest, and his sermons were heard "in huts and palaces."

According to the list of the cadet party, Grigory Petrov then went to the Duma triumphantly.

The art of the word

Petrov was born in 1866, in Yamburg (now Kingisepp). Father kept something like a beer. The son later recalled that he grew up among drunkenness, mate - and hated drunkenness, mate, and other everyday bestiality. This is how the life principles were developed. And political ... His first wife, Maria Kapitonovna, writes that as a teenager, Grisha learned a family secret: his grandfather was a Polish nobleman, a member of the 1861 uprising, he escaped from custody, hid, and got along with a Russian girl. Romantic plot. When a boy learns about a grandfather, something rebellious breaks out in the heart, is deposited in the head.

However, in the 16 years about the boyishness Petrov had to forget: his father died. Sick mother, younger brothers and sisters - all fell on the shoulders of a high school student. He moved to the uncle in Peter, entered the Theological Academy - they taught there for free. In a big city it was easier to earn money by tutoring (good, always been an excellent student). And he did it, and successfully - later he married his sisters, even with some dowries, and attached them to the case. The father of one of the students, a banker, a clever seminarist, liked him so much that he suggested: take off your cassock and go to my bank. Great prospects! Petrov, however, refused. He already felt in himself the gift of a preacher.

Repeat - a gift. Artistry, the ability to make listeners die away, to light hearts with an accurate and bright word is a special talent, not everything is given to everyone. Even at the academy, Petrov began to preach among the workers of Petersburg slaughterhouses. Became their favorite. Having finished his studies, he taught the Law of God - in gymnasiums, in the Mikhailovsky Artillery School, in the Page Corps. He lectured on biblical topics, they gathered crowds of people.

His book, The Gospel as the Foundation of Life, sustained more than 20 reprints, was published in several languages, and inspired such dissimilar people as M. Gorky and V. Rozanov.

“Of course, he was a complete atheist, but he loved Christ as a great socialist” - this is again the first wife of Petrov. As for atheism, let's make allowances for the fact that Maria Kapitonovna wrote memoirs under the Soviet regime. But about Christ - it seems ... Petrov defined himself as a "Christian socialist." Actually, rather, it was a man from the breed of truth-seekers and accusers - who presented his thoughts in the form of a sermon.

But it was precisely this freethinking, the habit of speaking without thinking that made him, let's say, a church dissident. The grand dukes taught Petrov the law of God to their children, and the sovereign heard about it, but there was a conflict between the official church and the popular priest. Petrov was accused of "Renovationism "," spreading views that disagree with the teachings of the Orthodox Church ", is that his assessment of the state "Pompadism" Yes "Disregard for God established authorities." He, in turn, threw accusations at church hierarchs, dependence on secular leaders, oblivion of Christ's ideas ... Politicians mixed in: the Black Hundreds were up in arms against Petrov. In general, at first there was a church punishment - sending for several months to the Cheremenetsky monastery (Petrov's farewell at the station was turned into admirers by admirers), and after a sharp letter to the metropolitan Anthony (Vadkovskomu) in 1908, he was deprived of his rank at all.

That for Petrov was, of course, a blow. He remained a preacher in spirit! But it’s one thing when a flock is taught by a man in a cassock, and another is a particular person ...

Actually, his life continued to decline. Not derailed - but in decline. He worked as a journalist - read it widely, but, of course, it was not the former noisy glory. Then - break with Maria Kapitonovna. Not very clear история: once a young student fell deeply in love with a romantic teacher, at a mature age, she seemed fascinated ... no, not by another man, but by science: having graduated from the medical institute, she became the academician's right hand I. Pavlova I spent days and nights at the clinic (died in 1948 as a famous physiologist, the winner of the Stalin Prize; in the life of Petrov, a new woman later appeared, their daughter was born). Next - the First World War (our hero is a war correspondent), the February Revolution (he accepted with delight), the October Revolution (he didn’t accept at all, hid members of his house Romanovs). In Civic blessed beloved son Boris, officer, fight the reds. The son died, it was a tragedy for Petrov. In 1920, with the Wrangel, in the hold of some steamer, ragged, hungry, arrived in Constantinople. From there he moved to Serbia. Although who needed it - in Serbia, in Constantinople, anywhere? Dead end. Collapse.

Where we do not exist

Researcher L. Seebergby examining the phenomenon "Countries of white lilies", notes the nonrandomness of the country that G. Petrov chose to follow. The pre-revolutionary Russian liberal intelligentsia adored Finland and the Finns. Many had cottages there, coming in contact with friendly service, the local elite. They were enthusiastic about Finnish diligence, honesty, they sympathized with the sympathetic people oppressed by the Russian Empire. True, those who had - then or later - to live side by side with the Finns, experienced not so much disappointment, but sobering. People as a people. Your percentage of good people and your percentage of scoundrels. Loafers, drunkards, thieves are also found. And the severity of oppression should not be exaggerated: with the king, the Finns had the broadest autonomy, their own parliament, their own laws, the police, the army, the state apparatus, etc. In fact, the tsarist government allowed Finland to live as it wants, in return, demanding one thing - not to rebel! And the attempts of some stupid officials to turn this land into the same part of the empire as the others turned into passive, but effective Finnish resistance, support of Russian revolutionaries, acts of terrorism (assassination of the governor-general N. Bobrikova in 1904).

They say that sometimes it is necessary to sink to the very bottom, so that, pushing off, to ascend to the top. They also say that at first a person works for a name, then the name works for him.

Petrov did have a name: a teacher, a journalist, a religious thinker. It helped out: they took to teach at the Russian gymnasium, began to travel with lectures. Speaking only in front of the Russian - not fed. Learned Serbian-Croatian. I felt the audience, I was able to select topics for conversations (even Muslim women brilliantly explained their possible role in modern society). And he started writing a book. A book that would help people - and the author himself! - to understand how states that live wisely, fairly, grow in harmony with their neighbors and with themselves.

He decided to tell you about Finland. For some reason (why - see our help) it was Suomi who seemed to him if not an ideal, then an example of striving for an ideal. Although the real Finland Petrov did not know - unless he went there before the revolution to the country. But sometimes too much knowledge even gets in the way. Sometimes the facts did not match? Hell, this is not a reference book! And what about? How to say ... Inspirational narration about a state where there is no natural wealth, but there is dignity and a habit of work, where wise politicians laid down such traditions that officials are honest, officers are loved by soldiers, and the church is respected ... Not that Utopia Island, but dream country. Dreams of Gregory Petrov, a man confused, but fiery and clean.

Book called "Finland. Country of White Lilies, first saw the light of 90 years ago - in 1923 in the Serbian publishing house Zidari Belly.

With her release, the glory descended on Petrova. After all, the Serbs were also looking for their own state path - and then they were offered an example. The book read poets and ministers, arguing about it, she came out again, again ...
In 1925, Petrov died - cancer. And "The Country of White Lilies" already lived an independent life. Soon after she was published in Bulgaria - and here she, too, became a bestseller (and the company “Grigori Petrov” appeared in Bulgaria itself). I came to Turkey - and so struck the great reformer of the country Kemal Ataturkthat he, relying on the army, ordered to include "Lilies" in the program of military schools for mandatory reading. It is impossible to calculate how many times and where the book was published - it’s known that Bulgaria has 14 times, Turkey has 16, which came out in Arabic, Kurdish ...

What role did she play in social development? The answer is not straightforward. Bulgaria and Serbia (Yugoslavia) were later communist: life itself outplayed everything. In Turkey, the Land of Lilies was called the favorite book by generals who read it in their cadet youth. True, they are also known as the organizers of the local military coups in the manner of Pinochet's: with an iron hand we will ensure order and economic development. Maybe that was how you defended the dream?

In Finland itself, the existence of the “Land of white lilies” was curiously recognized only in 1970. In 1978 she came out in Finnish. Nine years ago (in 2004 m) - with us. However, already rather as a rarity. The modern reader, after all, needs to clarify for a long time who it was — Gregory Petrov, long forgotten.

And to start a conversation about why it so happens that the ideas of Russian truth-dreamers sometimes excite people anywhere, just not at home.

Ctrl Enter
Noticed oshЫbku Highlight text and press. Ctrl + Enter
We are
Commentary on A. Petrov's interview “Fire and Tactics in the Russian Army: Another Look”On the other side of the “red” and “white”. Izborsk Club Report
Military Reviewin Yandex News
Military Reviewin Google News
3 comments
Information
Dear reader, to leave comments on the publication, you must to register.