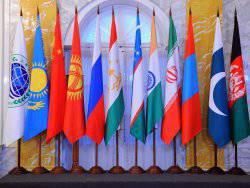 A round table on the theme “Shanghai Cooperation Organization: New Initiatives of Russia in 2013-2015” was held at the Moscow Humanitarian University. The participants discussed the development of the SCO in the context of "building a region of long-term peace and common prosperity" and tried to develop new initiatives to strengthen the role of the Organization in the system of international relations.


Opening the round table, the Special Representative of the President of the Russian Federation for the SCO, the national coordinator of Russia in the SCO, Kirill Barsky, noted that over the 12 years of its existence, the SCO had firmly established itself as a full-fledged international organization with powerful regulatory framework and effective understanding of its goals and tasks. According to him, the Organization is now taking a second wind, as it is in the center of world attention thanks to its independent policy. Interest in the SCO is growing, unification is becoming a kind of international magnet, replenished with new dialogue partners, the special representative of the Russian president said.

At the same time, Barsky stressed, the SCO is in dire need of public support and the strengthening of the social base, without which any Organization will lose its effectiveness. In this sense, he continued, the initiatives of non-governmental organizations, including the Public Diplomacy Foundation, the organizer of the current round table, are acquiring great importance. Thanks to such initiatives of public organizations, Barsky believes, the SCO can be filled with important and concrete content.

This initiative was supported by the chairman of the public council of the Public Diplomacy Fund, Alexander Sharlay, suggesting the creation of a Public Council under the SCO.

According to Leonid Shershnev, President of the Foundation for National and International Security, the emergence of the SCO dramatically changed the balance of forces on the world stage in favor of peace and cooperation, creating the prerequisites for greater predictability, orderliness and stability, and prompt search for answers to new threats and challenges to humanity. According to him, today the SCO is a new type of organization, the union of superethnos, the Eurasian Union of Civilizations. At the same time, he urged caution in accepting new members, especially Western countries, who could become Trojan horses for the SCO. In this regard, Leonid Shershnev reminded history the collapse of the USSR, which was the result of his careless dialogue with the states of the Anglo-Saxon civilization. Also, in his opinion, the Organization needs to take responsibility for establishing a peaceful life in Afghanistan after the withdrawal of NATO troops in 2014. The expert said that the SCO will still have to take into account the influence of the American factor in the region, since after the withdrawal of the international coalition troops, Washington intends to implement the concept of a limited military presence in the country. In this sense, the SCO should manifest itself as a new type of organization capable of solving not so much military as humanitarian tasks, Shershnev added.

Honored Scientist of Russia, former State Duma deputy Sergei Baburin sees one of the main tasks of the SCO to confront aglo-Saxon policies of controlled chaos. At the same time, he noted, the Organization should become not just a contemplator, but an effective tool to resist such a policy, in which violence becomes an international regulator. The future of the SCO depends on this, Baburin is convinced. “The SCO should become not only a club of interests, like the Council of Europe, but also a factor of stability and justice,” he added. “The organization should cease to be a thing in itself, it should become a thing for the whole world, ceasing to engage in self-rescue only of its members.”

Following the results of the round table, its participants adopted a resolution to be sent to the heads of state and structural subdivisions of the SCO, as well as to the UN and other international organizations. The resolution calls for the development of the SCO Development Strategy for 2015-2035, for which it is necessary to create an Institute for Strategic Research and Prospective Development in its structure. According to the authors of the resolution, the admission of Ukraine to its ranks would be of particular importance for strengthening the potential of the SCO.

During the round table, it was announced that from 8 to 12 July 2013 was held at the Moscow Humanitarian University of the International Summer School of Public Diplomacy for leaders of non-governmental organizations of the participating countries, observer states and dialogue partners of the SCO.