Estonia wanted to get a piece of Russia

30 May 2013
131
Recently, we have been quite actively discussing the topic of territorial and water disputes between Russia and such states as Japan and Norway. Although by and large disputes this situation is difficult to call. Rather, it is the desire of our partners to “chop off” from the Russian Federation impressive pieces of land and sea, which are rich in various resources. And if Norway has already managed to rejoice at the Russian present in the form of dividing the once controversial part of the Barents Sea water area along the middle line, and not along the meridians (as the USSR insisted in its time), Japan continues to look for ways and means to get the cherished tidbit in the form of the four islands of the Kuril archipelago.


Against this background, the desire to grab your chunk was also manifested among some of our neighbors, Estonia. A number of foreign news agencies, including Estonian, literally recently broke out with publications on the subject of the fact that territorial disputes between Russia and Estonia can be dealt with solely in favor of Estonia ... According to BNS, the demarcation of disputed territories will occur in such a way that The Russian side will receive 125,5 ha, and the Estonian - 127,5 ha. And these figures were exposed only to the victory of small Estonia over huge Russia - Estonia, which allegedly was able to snatch from Russia whole 2 “extra” hectares. Such information managed to delight the Estonian right and those who sympathize with them. And in Russia, these "concessions" also made a lot of noise, because if you believe this news agency, then official Moscow again lost more than received displaced territories.

And a new treaty with Russia on the final legally verified state border in Estonia is entrusted to be signed by Minister of Foreign Affairs Urmas Paet, after which this treaty is waiting for bilateral parliamentary ratification.

It would seem that the incident was settled. All remained with him, and you should not pay attention to publications of the foreign press about a new territorial gift from Russia. But, as they say, having burnt on milk, one has to blow on the water, especially since the words of Foreign Minister Urmas Paet somewhat diverged from the words of his press secretary. Paet, in particular, said that an interdepartmental agreement is only the beginning. After that, as it turned out from Paet’s words, a certain special commission will be created, which “step by step” will determine the passage of the state border between the two countries.
If we analyze the words of the Estonian Minister of Foreign Affairs, it turns out that today the countries still do not understand where the territorial division between them takes place. And if there is no understanding, then what is the price of this “new” contract? Would it not be that the demarcation special commission after the signing and ratification of the treaty will vilot the laid border line for a couple of kilometers towards ...

Touching on the topic of the current territorial dispute between Russia and Estonia, it is necessary to focus on the fact that this dispute manifested itself not yesterday or even the day before yesterday. 2013 marks the 21 year since the moment when the Estonian authorities began to insist that, when territorially divided, Russia took into account the 1920 model of the year concluded between Soviet Russia and Finland by the Tartu peace treaty. According to this agreement, in Estonia, a certain part of the Pechora district of the Pskov region can become part of the Republic of Estonia. We are talking about the so-called “Saatsetsky boot” - the Russian territory of the Pskov region, along which the Varska-Saatse road passes. Her Estonians consider their ... Estonian authorities have begun to express their concern that for citizens of this Baltic country to get from one part of Estonia to another they have to “wander” into the territory of Russia. They say that this is extremely inconvenient, and therefore it would be great if Moscow would give Tallinn the “Saatsesky boot” from its highway. 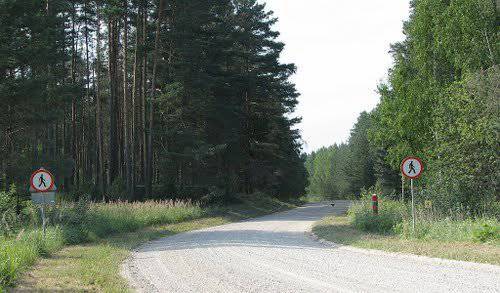 An interesting option, is not it ... Well, in this case, the Estonians would have to talk with their Baltic brothers Lithuanians. Why? Yes, at least, because hundreds of thousands of Russian citizens get from the "mainland" to the Kaliningrad region and back, too, to put it mildly, uncomfortable ... We have to overcome the territory of independent Lithuania, rushing by trains and cars that people (machinists, drivers) drive once again press the brake so as not to be accused of attempting to seize the Lithuanian state ... So maybe the Lithuanians of Russia will give a section of railways and roads up to the border with the Kaliningrad region - we need a precedent from the station Ana "victory of democracy" ...

By the way, Russia, inclined towards convenience to the Estonian authorities, has already once made a peculiar gift concerning the Saasetsky boot itself. It lies in the fact that people who want to proceed through the territory of Russia from Värsk to Saatse and back along the highway, which Estonians call their own, are not subject to border control rules. The only prohibition is a ban on stopping ... Apparently, breathless Estonians, who are forced from one point of the country to another through Russian territory without stopping, and initiated new conversations about the border redistribution.
In 2005, Lavrov and Paet have already met and discussed this issue. Then it was written in the contract that part of the “Saasetsky boot” was relegated to Estonia, and in exchange for this, Tallinn gives Moscow a forest plot in Meremäe and a plot of land under Värska. But the problem could not be resolved, because the lands promised by the Estonian authorities of Russia behind the Värska-Saatse highway were in private hands, and then the official Tallinn did not decide what to do with the local Estonian residents, who actually gave them along with the land of Russia . And now, apparently, the decision is made. According to some information, they decided to buy out land from Estonian peasants, let's say, “at a speculative price”.

It is noteworthy that in Estonia this territorial issue is discussed much more acutely than in Russia. It seems that the position of the Russian Federation on this issue is too soft. And, as you know, the manifestation of softness in a territorial dispute usually goes sideways, because after the highway on the Saasetsky boot, Tallinn may well recall other “own” lands that today belong to Russia. So, the exchange of territories is an interesting thing, but after all such exchanges with the nose, it would be impossible for us to remain, giving food for the great joy to the very Estonian ultra-right ...