Marshal of the Soviet Union Viktor Kulikov died in Moscow 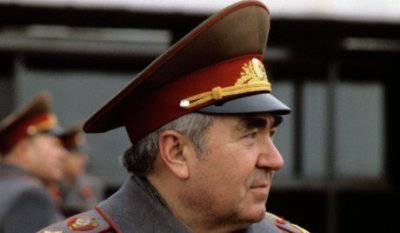 Marshal of the Soviet Union, Hero of the USSR Viktor Kulikov died on Tuesday in Moscow at the age of 91, Nikolai Deryabin, the head of the office of the Club of Military Commanders of Russia, said.


“Marshal Kulikov died in Moscow after a severe and prolonged illness in the 92 year of life,” Deryabin told Interfax.

According to RIA "News, Kulikova will be buried at the Novodevichy cemetery in Moscow. The farewell ceremony with the Marshal of the Soviet Union will be held 31 May in the Cultural Center of the Russian Armed Forces from 11.00 to 13.00

“By the decision of the Minister of Defense of the Russian Federation, Army General Sergei Shoigu, a commission was created to organize the funeral of Marshal Kulikov. Head of the General Staff of the RF Armed Forces General of the Army Valery Gerasimov was appointed chairman of the commission, ”the Defense Ministry reported, noting that Shoigu expressed condolences to the family and marshal.

Victor Kulikov was born on July 5 1921, in the village of Verkhnyaya Lyubovsha, Oryol Region. Entered the Red Army in the 1939 year after the end of the 10 classes.

Graduated from the Grozny Military Infantry School, the Officer's Higher Armored School, the Frunze Military Academy, and the General Staff Military Academy. From 1941 to 1945 he held various command positions in tank units on the South-West, Kalinin, 1st Baltic and 2nd Belorussian fronts. From February 1943 to May 1945, he was deputy chief and chief of staff of a separate tank brigade.

Kulikov wore the title of Hero of the Soviet Union, was an academician of the Academy of Military Sciences and a laureate of the Lenin Prize.

It should be noted that at present, two marshals of the Soviet Union survived in Russia - Vasily Petrov and Dmitry Yazov.

Soviet military leader, Marshal of the USSR, Hero of the Soviet Union Viktor Georgievich Kulikov was born on July 5, 1921, near Orel, in the village of Verkhnyaya Lyubovsha, in a working-peasant family. Father - George Filippovich, mother - Anastasia Ivanovna.
Viktor Kulikov’s childhood passed in the village of Nevinnomysskaya (now the city of Nevinnomyssk, Stavropol Territory). In 1939, he graduated from a ten-year school in the village and entered the Grodno Military Infantry School, which he graduated from in 1941.
During World War II, Viktor Kulikov fought in tank units on the South-Western, Kalinin, 1 Baltic and 2 Belorussian fronts, commanded a company, was chief of staff of a battalion, brigade.
He participated in a border defense battle in Western Ukraine, in Kiev and in Kharkov defensive operations.
From October 1945 to November 1957 was the battalion commander, deputy regiment commander, regiment commander, chief of staff and division commander.
In 1947, he graduated from the Higher Armored School, in 1953, in the Military Academy named after MV Frunze, and in 1959, in the Military Academy of the General Staff.
In 1959-1961, he was deputy army commander in the Belarusian Military District.
In 1961-1962, he was on a business trip in the Republic of Ghana as a senior group of Soviet military specialists to provide technical assistance.
In 1962-1964, he was the first deputy commander, and in 1964-1967, he was the commander of the 6 armored army (Petrozavodsk city) of the Leningrad Military District.
In 1967-1969, Viktor Kulikov commanded the troops of the Kiev Military District, in 1969-1971 he was the Commander-in-Chief of the Soviet Forces Group in Germany, then Chief of the General Staff of the Armed Forces - First Deputy Minister of Defense of the USSR, from January 1977 to January 1989 he was First Deputy Minister of Defense USSR - Commander-in-Chief of the United Armed Forces of the States Parties to the Warsaw Pact.
14 January 1977 was awarded the title of Marshal of the Soviet Union to Viktor Kulikov. In 1981, he was awarded the title Hero of the Soviet Union.
In 1983, the Lenin Prize was awarded. In 1971-1991, he was a member of the Central Committee of the CPSU; in 1999-2003, he was a deputy to the State Duma of the Russian Federation.
In 2000-2003 - Chairman of the Committee on Veterans Affairs of the State Duma of the Russian Federation. He was a member of the Supreme Council of the United Russia party.
In 2004, Viktor Kulikov was awarded the title of Honorary Citizen of the city of Orel and the Oryol Region.
Other awards include Viktor Kulikov: the Golden Star of the Hero of the Soviet Union (1981), four orders of Lenin, three orders of the Red Banner, three orders of the Patriotic War 1 degree, the Order of the Red Star, 18 medals (including "For bravery" and " For military merit "), as well as 31 order and medals of foreign countries. Winner of the Lenin Prize (1983), the GK Zhukov Prize, the MV Frunze Prize.
Victor Kulikov lived in Moscow, was married to Maria Maksimovna Kulikova. Had two daughters, grandchildren and great-grandchildren.