Ilya Glazunov: “Power must be strong, otherwise it is not power!” 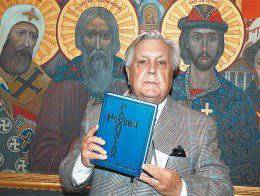 The artist - about the embezzlers and the introduction of the death penalty.


Ilya Glazunov celebrates his upcoming birthday in his writings - he opens the Museum of the three estates, prepares for publication another book about stories Russia. On the problems of modern famous artist talked with "AIF".

AiF: - Russia sank in corruption. It was as if the country had returned to the old days, about which the classic wrote: “These are people without a thought of duty and honor, without the slightest desire for the good of the general, people who make up a huge corporation of robbers”.

IG: - In our social and social life, the main goal today is the fight against corruption. I am generally for a strong and courageous vertical of power. Power must be strong, otherwise it is not power! Especially in such a huge multinational country as the Russian Federation, which today is reaping the destructive fruits of the 1991 capitalist revolution of the year. The country is torn apart by the lack of control and impunity of schemers and thieves. And this is at a time when people are below the poverty line, poverty and degeneration. So stop dissolving democratic drooling! It's time to finally move from words to action. The law is the same for everyone - not only Roman, but also Russian law of Yaroslav the Wise speaks about it. In the fight against corruption and all the terrible phenomena of our reality, I, like millions of my fellow citizens, for the most stringent measures to curb unpunished criminals.

I am very surprised that the confiscation of property of embezzlers and corrupt officials is not introduced. For example, the situation with Oboronservis. Billions are taken away from the state, but there is only a continuous talking room and the name of the main culprit of this criminal case is hushed up in a surprising way. I do not understand one thing. America, a symbol of democracy for many of our and European politicians, has not erased the death penalty from its civilian life. But we are taking the worst from the USA, and this was not adopted, referring to the European Union. But the European Union is in a deep economic and political crisis - why do we need it? They will buy our oil and gas!

But the Americans are right: the impunity of the atrocity of the death penalty leads to permissiveness, political chaos and the flourishing of corruption. On the example of “Oboronservis” it is especially clear what the impunity of fraudsters who pursue personal selfishness and profit leads to. I, like everyone, am waiting for changes in the army. I was fascinated by the beauty and power of the 9 military parade on May 2013. Finally, the Suvorov students took part in it, as it always did before Serdyukov.

Another example. Why from Russia made a tumbleweed? We have an almost open border! In the same America or England, the example of which we so want to follow, the strictest passport and economic control, up to and including demeaning fingerprinting procedures and photographs of the retina. Why don't we do this? We need to raise the passport and visa services and border control to a decent level. This will cut off a wave of crime, terrorism, drug smuggling and slave trade. And xenophobia has nothing to do with it! If in Russia we introduce the same procedures as in the USA, this will increase the security of our state. Why has the Russian Federation opened its doors to migrant workers who behave so uncontrollably and cheekily and violate Russian laws? And this is despite the obstacles that ethnic Russians who had once been sent to the fraternal republics to raise their welfare must overcome - how difficult it is for them to return home and get citizenship, housing, work ... This is a bureaucratic wall! But why is it so free for migrant workers?

"AIF": - Ilya Sergeevich, these your statements - isn't it xenophobia and chauvinism?

IG: - I am a nationalist. Chauvinist would say that my Russian people are the best of all the others. And I, as a patriot, affirm that the Russian people are no worse than others. But I am proud that I am Russian. When someone says that he is a Pole, a Frenchman, a Jew, a Tatar, a Georgian, no one will accuse him. But if you say: "I am Russian," - immediately begin talking about chauvinism. This is a biased injustice!

AiF: - The voice of the opposition now sounds in the political life of Russia. Some call them a bunch of screamers, while others believe that this force must be woven into the power structures, for they are fighting for freedom and democracy.

IG: - There is freedom “from” and there is freedom “for”. I would dream that freedom would be exercised to increase the birth rate of the Russian people, to increase economic power. I would like to have the freedom to return and to arrange all Russians in their homeland, who, and more than 25 million people, remained in the former Soviet republics. Not to mention the millions of refugees from Russia after 1917. It was a great outcome. They died, but their children and grandchildren remained. Many would like to return. A few months ago, by means of teachers and students of the Academy founded by me, a monument was erected to the great reformer P. A. Stolypin, who said: “You need great upheavals, but we need a great Russia.” So what can I say about the opposition? I am far from this politically scandalous hype in the name of my ambitions, in which I do not see the struggle for great Russia that is close to me. Those who want great upheavals make noise. And I want a revival of great Russia.

"AIF": - Another problem excites the society - our orphans. Many public figures say: if foreigners do not adopt sick children, then here they will die.

IG: - Shame for our country - the sale of their children! It is obvious that foreign adoption has become one of the official and criminal schemes of the slave trade. On a par with prostitution. The blood runs cold in the veins, clenched fists from resentment for our great country, which allegedly cannot feed and put on its feet its future citizens - the defenders of the Fatherland. I am convinced that the state and various confessions, especially the Orthodox Church, should create a system of orphanages, where children will grow up healthy, well-fed, trained, educated in the spirit of patriotism. Our government is obliged to raise beggarly wages for the work of educators, doctors, teachers of orphanages so important for the state. I am sure that in our orphanages many children have the talents of musicians, scientists, artists, poets and engineers. I am against the international adoption that is shameful for our country, but I believe that bans and denunciations will not help here, we need concrete measures to help children who have no parents.

AiF: I heard that an exhibition of works by students of your academy was banned in Moscow.

IG: - Unfortunately, this is true. Last year, an agreement was signed with the Small Manege for the exhibition of works by students and graduates of the Academy of Painting, Sculpture and Architecture Ilya Glazunov, the rector and founder of which I am. I am deeply outraged that Muscovites were deprived of the joy of seeing young realist artists who are not given the way. Russian culture today drags on a miserable existence, is overwhelmed by the waves of show business, and visual art is crushed by the terror of "modernity." Blue enema on the bank is exposed as an image of the Russian church ...

But I am happy that with the triumphant success the exhibition of students of the Academy was held in March 2013, in the Central Exhibition Hall of St. Petersburg. Theses of religious, historical, portrait, landscape workshops looked especially powerful. This proves that the people are close and necessary to the true art of high realism, which is eternally modern, like the sky today, the sound of the surf and the woman we love.

Ctrl Enter
Noticed oshЫbku Highlight text and press. Ctrl + Enter
We are
The world we leave, the world we enter, and the world between themOn the other side of the “red” and “white”. Izborsk Club Report
Military Reviewin Yandex News
Military Reviewin Google News
33 comments
Information
Dear reader, to leave comments on the publication, you must to register.