The situation of the Christian communities of Syria is disastrous: an interview with the Ambassador of Armenia to Iraq 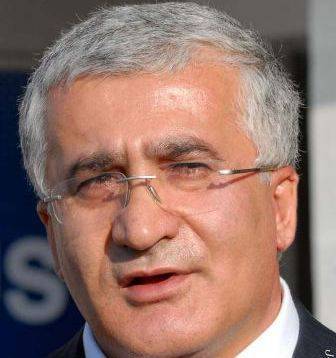 Ambassador of the Republic of Armenia in Iraq Murad Muradyan agreed to answer the questions of a REGNUM correspondent regarding the situation in the Middle East as a whole, as well as about the fate of the large Armenian community scattered throughout the countries of the region.


REGNUM: Mr. Ambassador, how does the Armenian community of Iraq live today, with many years of history and rich heritage? What problems are Armenians experiencing in post-war Iraq, and what measures, in your opinion, are needed to support them?

Indeed, the Armenian community in Iraq has a long history. Moreover, it is one of the oldest, largest and most influential Christian communities in Iraq. The number of the Armenian community at different times fluctuated under the influence of various political events, both in the country and in the region. It reached 100 thousand at the beginning of the 20 century - after the Armenian Genocide in the Ottoman Empire in 1915, and until the overthrow of Saddam Hussein, 30-35 of thousands of Armenians lived here. Currently, there are up to 15 thousands of Armenians in Iraq. Basically, they live in Baghdad, as well as in the cities of Basra, Mosul, Kirkuk, Erbil. 15 Armenian churches are active in the country. There are schools, youth, women's charitable organizations with more than 80-year history. Community life is generally organized at a high level.

As for the problems of the Armenian community, they are the same as for the whole country - security, high level of corruption, lack of jobs, very low socio-economic standard of living. The embassy provides all possible assistance to the Armenian community, including in matters of the expedited issuance of exit visas to Armenia and the issuance of a residence permit. Often we petition the government of Armenia for those who want to obtain citizenship of our country. In local issues of concern, we turn to the Iraqi authorities. Together with community organizations we organize various events.

REGNUM: At what level are the interstate relations of Armenia with Iraq? What are the prospects for their development?

The Armenian Embassy in Baghdad was opened in 2010, and in 2012 - the Iraqi Embassy in Yerevan. In September 2012, the official delegation of Iraq headed by Deputy Prime Minister Raush Nour Shaweis, consisting of eight ministers of the central government of Iraq, paid a visit to Armenia. In November of the same year, the return visit of the Armenian government delegation headed by Deputy Prime Minister Armen Gevorkian to Iraq took place. At the same time, Armenian businessmen took part in the 39 International Exhibition in Baghdad.

An intergovernmental commission on trade and economic cooperation has been established, headed by the vice-premiers of the two states. Signed more than six treaties and agreement between governments. In February, a delegation from the Iraqi Ministry of Health visited Armenia to study the Armenian health infrastructure, and protocols on cooperation were signed. The Ministry of Economy of Armenia sent a delegation to Kurdistan, where it is planned to open a trade mission of Armenia in Erbil.

The trade turnover between Armenia and Iraq in 2012 amounted to $ 25 million. We hope that by the end of 2013, we will be able to double this figure. Between the two countries there is a huge potential for mutually beneficial cooperation in almost all areas - the economy, humanitarian and cultural spheres.

REGNUM: Is it possible today to speak in principle of a united and integral Iraq? How much does the central government in Baghdad control the processes in the country? How has the situation changed after the overthrow and execution of Saddam Hussein? Are Sunnis, Shiites and Kurds able to find a common language in a single Iraqi government?

Of course, this is one of the most pressing issues of the past ten years after the overthrow of Saddam Hussein. Many international organizations, the United States, expert and research groups consider the division of Iraq on a confessional basis as one of the options for ensuring security and peace in the country. However, the prospect of such a division has, along with advantages, many disadvantages. The consequences may be the most controversial.

Under the new Constitution of 2005, Iraq is a federal parliamentary republic based on the consensus of three main ethnic and religious communities: Shiites, Sunnis and Kurds. The Prime Minister exercises general leadership, the cabinet is formed on a coalition basis, although, as the work of the central government of recent years has shown, it is not effective enough. Conflicts between major party groups, boycott of government work by parliament, accusations of usurpation and incompetence are frequent.

The last American soldier left Iraq in December 2011. There are different assessments of the results of the stay of the American military in Iraq. They ensured a certain stability on the one hand, and on the other, they were looked at as occupiers and considered the cause of terror in the country. Only in April of this year, more than 720 people died as a result of explosions and terrorist attacks in Iraq, thousands of people were injured.

You can understand the attitude of the ordinary citizen to everything that is happening. People live in the absence of a constant power supply (in some regions the lights turn on for 3-4 hours), poor-quality drinking water, regular explosions and terrorist attacks, not to mention environmental problems, lack of basic conditions of medical care, education, and high-quality nutrition. In general, a country with the richest hydrocarbon reserves, ancient history, culture and traditions, at this historical stage provides low living conditions for its people.

REGNUM: Historical, but at the same time tragic events take place in the Middle East. How does the war in Syria affect Iraq?

All the events that are happening today in the Middle East clearly have a great influence on Iraq, which determines both the policies of the Iraqi authorities and the problems of Syria and other states of the region, and their position in many international organizations - the UN, LAS and others. Iraq rightly protests against the intervention of external forces, especially the negative role played by Turkey in the Syrian conflict.

REGNUM: Many analysts predict the inevitable emergence of a new state in the region called Kurdistan. How realistic is this forecast, especially against the background of the process of Turkish-Kurdish reconciliation? Do you have a feeling that Turkey is pushing the Kurdish problem from its territory into neighboring countries and regions, particularly in Iraq, where the Kurdish autonomy is the most wealthy in its human potential and controls, in addition, the richest oil and gas resources?

Kurdistan is currently one of the independent regions of Iraq. In a short period, the Kurdistan Government managed to achieve significant success in the development of the region - in ensuring security, establishing trade and economic relations with many countries, building housing, hotels, and implementing infrastructure projects that provide a significantly higher standard of living for almost 5-million people in the region.

The government of Kurdistan carries out international cooperation rather independently. Many states (more than 30) have opened consulates general in Erbil. The division of powers between the central government of Iraq in Baghdad and the regional government in Kurdistan is carried out within the framework of both the Constitution of the country and various agreements. Although from time to time problems arise. It is worth recalling that when the regime of Saadam Hussein was subjected to an international embargo, the pressure on Baghdad was also carried out through the intervention of the Americans through Turkey in Kurdistan.

Turkey’s role in exacerbating relations between the central government of Iraq and the leadership of the autonomy in Kurdistan is generally quite large. Turkey is trying to solve its own economic and political problems with it. In particular, against this background, the Turkish side is trying to consolidate the function of a transit state for Kurdistan and the position of its main trade and economic partner.

REGNUM: How are Iraq’s relations with Iran being built today? How real do you think the prospect of the war of the West and Israel against Iran?

Relations between Iran and Iraq are developing quite steadily. In all directions, an increase in cooperation. Iran is one of the main trade and economic partners of Iraq. Of course, there are still problems associated with the aftermath of the Iraq-Iran war, which are solved by the work of various intergovernmental commissions. The two countries combine their railways. Iran helps Iraq with power supply, participation in many energy projects.

As for the military action against Iran, today I consider such a prospect unlikely. Especially, against the background of the existing bloody conflicts in the region and their consequences. I think politicians have enough wisdom and patience not to create another center of violence with far-reaching consequences.

REGNUM: By virtue of your work, you must have operational information about the state of the Armenian community in Syria. Please describe the situation in which the Syrian Armenian community found itself. How can she be helped, can Armenia provide such assistance?

The situation of the Syrian Armenians, as well as other Christian communities of this country, is catastrophically difficult. They are trying to maintain neutrality in this conflict. This is a very sensitive question. More than 100-thousandth Armenian community lived mainly in Aleppo, which became the center of fierce fighting. The government of Armenia carried out a number of activities to assist the Syrian Armenians, including the issuance of visas and civilian passports, the allocation of humanitarian aid, the transportation and accommodation of children in Armenia, etc.

REGNUM: If you were asked to give a short political forecast on the possible future of the Middle East region, what emphasis would you pay attention to?

1. Violence and conflicts in the Middle East will continue in the coming years, and they, unfortunately, will spread to neighboring countries - the entire space of the so-called Greater Middle East.

2. Today, there is an increase in tension between the three major powers in the division of spheres of influence in the region: Iran, Saudi Arabia and Turkey. At the same time, if the conflict between Iran and Saudi Arabia is of a religious nature, due to the presence of contradictions between Shiites and Sunnis, then the policy of modern Turkey is based on the ideological basis of neo-Ottomanism. Turkey today looks not only to the Middle East, but also to North Africa. Such a policy is destructive for the whole region.

3. I do not exclude in the future the emergence of new states in the Middle East.

Ctrl Enter
Noticed oshЫbku Highlight text and press. Ctrl + Enter
We are
Andrei Epifantsev: Strategic Alliance of Armenia and Russia in QuestionErrors of Armenia and the success of Azerbaijan ("Journal of Turkish Weekly" Turkey)
Military Reviewin Yandex News
Military Reviewin Google News
80 comments
Information
Dear reader, to leave comments on the publication, you must to register.