Condoms on Eternal Flame: new pages of mockery over the memory of fallen warriors 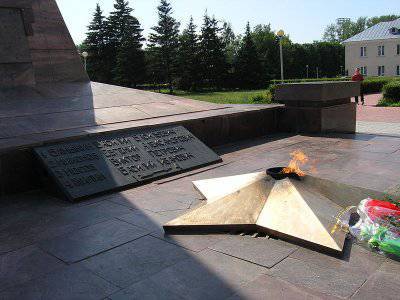 One gets the impression that Russian citizens are systematically and methodically trying to accustom themselves to treating abomination with outright indifference. Like, accustom yourself to the thought: my hut is on the edge, and if someone wants to organize actions that are incompatible with historical by the traditions of society, I want to organize provocative actions, this should not interest me in any way, because these actions are personally directed at me. The message is clear: today - to sow the seed of indifference in our minds, tomorrow - to turn us into a submissive herd, ready to even go to the slaughter with irresistible humility. In the wonderful Soviet motion picture Afonya, one of the heroes pronounces the following words: “Traitors and murderers are not so terrible, since they can only betray or kill, but those who are indifferent are terrible. It is with their tacit consent that all crimes occur. ”


This time, another action of abomination, clearly aimed at assessing the level of indifference in Russian society, was noted this time in Togliatti. Against the background of the latest manifestations of outright abuse of the memory of Soviet soldiers, who gave without any exaggeration the freedom of the world from the plague of fascism, the action of the ANO SPN Project April became a kind of complement to the vileness that is spreading throughout the country (and not only, by the way, according to ours) .

A group of “April” activists decided to organize an action on the International Day of Remembrance of AIDS Victims, during which they gathered to tell Togliatti people about the problems of increasing the number of patients with the syndrome in the Samara Region and to honor the memory of those who died from diseases caused by immunodeficiency in the region. It would seem that an educational action with a completely rational and good direction, if not for one thing ... Young people decided to arrange this action at the Eternal Flame, and “decorate” their “show” with a remarkable element: a plate with condoms placed on the monument to fighters who fell in the years of the Great Patriotic War, with the subsequent distribution of contraceptives to passersby. If this is not an abomination and not a provocation, then what? ..

If the participants of the action decided to draw the attention of Togliatti people to the problems of HIV and AIDS in the city, it was difficult to find a more inappropriate place for this. And what: the organizers did not understand this? Their brains were so absorbed in fighting the spread of acquired immunodeficiency syndrome that they did not realize what they were doing? All understood, all aware! It is obvious. It is also obvious that the place for the action was not chosen spontaneously - with an eye to the fact that the action will cause a resonance, Project April will thunder, and then everything will calm down, since indifference in our society sometimes beats all records. Resonance, indeed, was caused, this very “April” thundered, only with the cultivation of subsequent indifference a clear puncture came out ...

The holding of such an “enlightenment” action by the “Project April” caused a real indignation both in Tolyatti itself and beyond. Condoms on the Eternal Flame in a country where it is difficult to find a family who did not lose any of their relatives and relatives during the Great Patriotic War - a mockery of a special nature.

Representatives of the public organization "Officers of Russia" sent a request to the reception office of the Samara governor and the local prosecutor's office with a request to assess the trick of young people in Togliatti.

Could not remain indifferent to the manifestation of vandalism as ordinary people, so representatives of the authorities. In particular, State Duma Deputy Olga Batalina called for combating the desecration of monuments, forcing people to take responsibility for their actions, which are a blow to public foundations. True, the negative side in the action "Project April" saw not all. One of such gentlemen was the Togliatti deputy, a fair justice, who said that he did not see anything reprehensible in the action against AIDS, because the Eternal Flame, quote:
"Is it a common symbol and what a scary thing was it used to enhance the effect of another action?"

Obviously, to the notice of the Togliatti deputy at one time did not bring the information that the Eternal Flame, burning on the monuments in memory of the fallen soldiers during the Great Patriotic War, symbolizes. In connection with the statement of this legislator, you begin to doubt that the word “fair” is an exact term suitable for the name of the party, according to the lists of which this gentleman was elected.

The writer Sergey Shargunov spoke about the action of the “Project April”. His words are quoted by Rossiyskaya Gazeta:
I am truly sorry for those who are sick and dying of AIDS, this is a real problem. But the Eternal Flame is a tribute to those who died in the Great Patriotic War. And only them. A mixture of characters, which we were offered in Togliatti, looks absurd. By and large, it can offend those who fought. To mix one with another is a bad eclecticism. The relevance of such games should always be respected, especially when they touch upon tragic and so high themes. It requires a special feeling. I think that any actions, even with the best of intentions, around the Eternal Flame are inappropriate. I am sure that it would be more useful if the activists of the fight against AIDS tried to support our doctors or started the fight against drug mafia.

If we talk about the incident in Tolyatti, then this is not an isolated case. In our country, people managed to grow up, who understand the presence of the Eternal Flame as a symbol of memory in their own way. And also those for which the second word in the phrase “Eternal Flame” is decisive has grown up: to fry sausages, for example, to sit in the company in the winter - drink a bottle or two or three beers and warm your hands ... A sort of urban picnic ...

However, many frankly do not understand why society accuses them of mocking the memory of dead soldiers. Like, what a mockery - we just grilled kebabs ... Misunderstanding of some is perfectly used by others who are ready to foam at the mouth to prove that there was no abuse, that these are media notions, methodically moving towards their goal - to trample the people’s memory of their history as such . In this regard, one can imagine an attempt to justify the action in Togliatti by one of the supporters of its holding. Information taken from the page of the ANO SPN “Project April” in one of the social networks.

Natalia Chirkunova:
I consider such statements to be another informational duck of the yellow press. Surprisingly, this was picked up by the media, without even really understanding the situation. And the purpose of the event had nothing to do with the memory of the war heroes. The fact is that the organizers of the rally found Freedom Square, where the monument is located, the most crowded for Sunday. The local population goes to the square for a walk, and there is quite a lot of people on weekends. The monument is located in the center of the square, where the participants of the event are located so that they can be seen from across the square. All these actions are quite logical and understandable.

The girl is clearly one of those who are already on the hook of the organizers of such actions.

Of course, it is logical ... But if so, then why would the activists of the “April Project” not hold the same action, for example, in the station toilet, because there one day more people pass than the area ... The guys have not finished ...
Is there a means that once and for all put in place those who wish to “play the masses” by desecrating the holy places of the people? Of course there is! It is called: article 214 of the Criminal Code of the Russian Federation "Vandalism". One year’s time - for correctional work on sweeping the same square in Tolyatti and caring for the monument with the Eternal Flame (this is at best), perhaps there will be bright thoughts about how to convey to the public in a more civilized way ideas about the fight against the spread of terrible diseases and other thoughts.