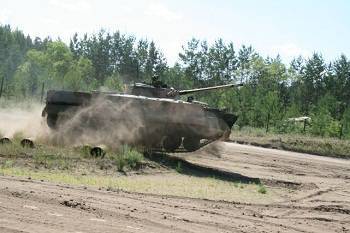 Huge merit in the creation of the BMP-3 belongs to Alexander BLAGONRAVOV, chief designer of the SKB Kurganmashzavod from 1974 to 1989 years. Under his leadership, an enormous amount of work was done on the development of infantry fighting vehicles. The BMP-3 introduced 111 inventions and patents of specialists from the special engineering design bureau. Today Kurganmashzavod and SKBM are part of the Concern Tractor Plants.


BMP-3 embodies cutting-edge ideas in various fields of science and technology. The body of the car is made of armored aluminum sheets. The car has an original layout with rear engine compartment. The troop compartment is designed for five paratroopers with two additional places. The location of the hatches and doors allows for quick landing. Forcing water obstacles does not require additional training. The machine is equipped with a smoke screen system, an automatic fire extinguishing system, communications equipment, and integrated dosimetric equipment.

The turret’s armament is stabilized in two planes, includes a 100 mm gun - an anti-tank missile launcher with an automatic loading system for shells, a 30 mm automatic cannon with a two-tape supply of ammunition of choice and a 7,62 mm machine gun. The fire control system allows you to fire from a standstill and afloat, hitting the enemy’s manpower day and night in an open field and shelters, as well as infantry fighting vehicles, Tanks and low flying helicopters. It includes a laser rangefinder, ballistic computer, two gunner’s sights, commander’s sight, commander’s observation device.

The BMP-3 is air transportable; it can be transported by rail, road or sea. It successfully combines excellent mobility, the highest firepower and reliable protection and is equally well suited for special operations and general combat. 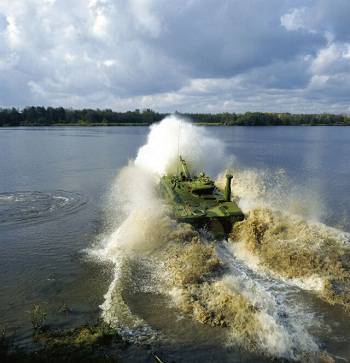 At the same time as the BMP-3, the BMP-3F infantry fighting vehicle was developed and adopted for use by the Marine Corps, border and coastal troops. The design of the BMP-3F compared with the BMP-3 has been amended to increase the buoyancy and stability of the machine. Naval the option has high maneuverability afloat, has the ability to move at a level of excitement of 3 points, and can also fire with the necessary accuracy at a level of excitement up to 2 points. The time the machine was continuously in the water was increased to 7 hours with the engine running, which ensures the safety and reliability of the BMP-3F in various conditions at all stages of its use at sea. Powerful water-jet engines provide confident maneuvering and loading onto landing ships under their own power from the water during rough seas. The design of the BMP allows towing the same product when operated on water, moving in tow behind sea raid boats and going ashore in the presence of a breaking wave.

Due to its excellent mobility, protection and firepower combined with exceptional reliability, the BMP-3F has become one of the world's best examples of a floating combat vehicle as unified as possible with the linear BMP-3.

Also on the basis of the BMP-3 in the 90-s, the commander's BMP-3K was created and put into service, intended for conducting combat operations as part of a unit, controlling the battle by the commander, and communicating with other units and with the higher level of command and control. The main tactical and technical characteristics and weapons are the same as those of the BMP-3, but the machine is additionally equipped with navigation equipment, radio stations, a receiver, an antenna mast device, intercom equipment, and an autonomous power generator.

Another vehicle based on the BMP-3 is an armored repair and recovery vehicle BREM-L. It is used to evacuate defective (damaged) infantry fighting vehicles, other light-duty vehicles by weight from under enemy fire, and to assist crews in the repair and maintenance of vehicles in the field. The machine is also adopted by the Russian army. 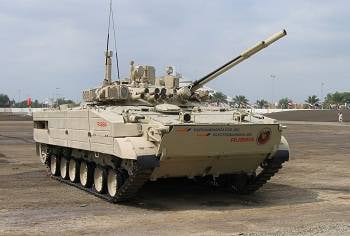 The BMP-3 chassis can be used to install various weapons systems, both Russian and foreign, including artillery systems, air defense systems, as well as multi-purpose missile systems. Complexes "Chrysanthemum-S" and "Cornet" in Russia adopted.

A comprehensive modernization of the BMP-3 was carried out in the 90-ies. JSC "SKBM" together with co-contractors on the basis of the TTZ has developed a modernized version of the machine, as well as options for upgrading previously supplied machines. Machines in a modernized version passed state tests. The BMP-3 has the potential for further improvement in many ways. But in today's quality, it remains one of the best and most versatile of all known combat vehicles of similar purpose and class in the world. Alexander BLAGONRAVOVA, the chief designer of this machine, managed to create a unique machine, the modernization potential of which has not yet been exhausted.

Ctrl Enter
Noticed oshЫbku Highlight text and press. Ctrl + Enter
We are
Kurganmashzavod presented at the RAE-2015 exhibition machines of the Kurganets family with an updated layout"Kurganets-25", BMD-4M, BTR-MDM: "Tractor Plants" are heading ahead
91 comment
Information
Dear reader, to leave comments on the publication, you must to register.