With the "democratizers" fly the last mask 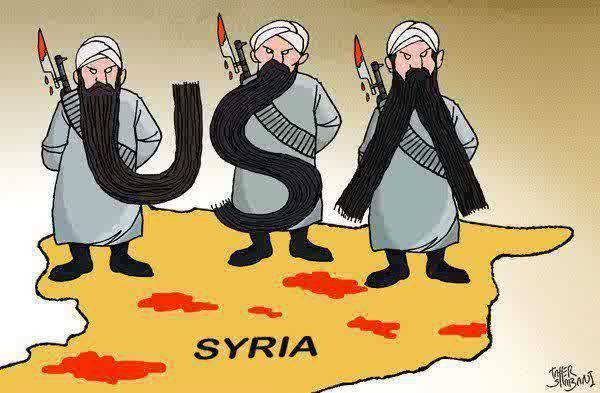 Micronesia, or who else is going to hike?

After the UN General Assembly adopted 15 on May, another anti-Syrian resolution, Western propagandists began with double strength to say that “the whole world is against the Syrian government,” “the whole world supports the opposition,” “the Assad regime is in isolation,” and so on.
However, the resolutions of the UN General Assembly are only advisory in nature. The decision on any military operation against Syria or any other country can only be taken by the UN Security Council. But, as is known, conspirators have real problems there - they are not in a position to give legitimacy to their gang intentions to bomb another state. But in the UN General Assembly there is no veto right, there are many states dependent on the USA and the West or still believing their promises. There you can push any resolutions. But they can only be used for propaganda purposes. What they are doing.

But it would seem that if such an influential and authoritative international body as the UN General Assembly adopted this resolution, which condemns the actions of the Syrian state, and the atrocities of the so-called “opposition” are completely ignored, does this mean that “almost all mankind?

It turns out that this is not only not the case. The situation is exactly the opposite of Western propaganda. And the United States and its allies will not be able to cover up their aggressive intentions with the “opinion of all mankind”.

Let's look at the results of voting on the anti-Syrian resolution in the UN General Assembly:

At first glance, it would seem, indeed, most countries - as many as 107 - supported the resolution, that is, they condemned the legitimate Syrian government and, as it were, made it "illegitimate."

But do these 107 states represent the majority of humanity?

I used the source, which is considered to be neutral - Wikipedia. Namely - a page that shows the population of countries in absolute and percentage values ​​- http://ru.wikipedia.org/wiki/Список_стран_по_населению

I will not give all the detailed calculations (if someone doubts, he can calculate himself), but the following happened:

Total: the anti-Syrian resolution was somehow not supported by the countries representing 65,04% of the world's population.

Perhaps there is a meticulous reader who will calculate exactly the percentage of the population of countries that voted for the resolution. But, if we also take into account countries that are not part of the UN GA, it turns out that only one third of humanity is against Syria.

At the same time, only a little less, as a percentage, of those who categorically oppose this resolution. That is - firmly supports Syria.

It must be said that voting against the resolution imposed by the West is the real courage. And this is far from a small courage, given the vengefulness of the NATO countries and their satellites. In this regard, I want to remind you that Syria, in many respects, is being punished for its independent voting against the decisions of those who assumed the right to speak on behalf of the world community. For example, in March 2011, it was Syria, while still a member of the Arab League, voted against aggression against the Libyan Jamahiriya - and a week after that, the first unrest broke out in the city of Dara.

Not all state leaders are capable of such courage in the face of a technically developed NATO bloc and money bags like Qatar. But the nations of the world are not willing to go on about them. Therefore, so many abstained from voting.

So, the largest countries of the world - China and India - did not support the resolution. And who supported her?

At firstThese are the NATO states themselves. No comments.

Secondly, the countries of the former Soviet Union, Eastern Europe, who hope to join the European Union or the newly admitted to the EU and are waiting for handouts. It is not surprising to see Poland on the list, but it is especially regrettable - the fraternal republics of Yugoslavia, which themselves went through all the NATO gangster lawlessness. Now, the ruling elite, apparently, for a long time will not dare to go against the will of the West, fearing The Hague. It is intimidated and deprived of their national will education - fragments of the once strong and influential SFRY. It also includes the former Soviet republics, whose leadership is Russophobic and will vote on the orders of Washington.

The third group - Arab states. In addition to Lebanon, Iraq and Algeria, the rest are dependent on the "money bags" of Qatar and Saudi Arabia. They understand that they can be next, and therefore also deprived of their own national will.

Fourth group - the traditional allies of the NATO bloc like Israel (so far without it?), Japan. South Korea, as well as the countries of Latin America, who have not yet managed to get out of a semi-colonial state. (The truly independent states of the LA, on the contrary, unanimously voted against the resolution).

Fifth group - These are dwarf states. Monaco, Maldives, Palau, Comoros, Liechtenstein, Micronesia and others. It is due to such crumbs that the necessary number of votes is accumulated in the General Assembly.

However, among the abstentions from voting there are also small states. But on the other hand, a party that does not support interference in the internal affairs of Syria does not shout about “international isolation of the regime”!

So, gathered in the "crusade" against the ATS, do not hide behind humanity! Of course, you can get a few dozen votes of some micronesia, which will obediently vote in the GA, but it’s not worth talking about the weight of such allies in the next campaign. And is it possible to put on one level the voice of Micronesia and the voice of China? These are still different things.

Iran is preparing to meet the true friends of Syria

At first, NATO members, under the leadership of the United States, created an alliance called Friends of Libya. So that everyone can understand that they are bombing and destroying one of the most socially advanced states for a reason, not enemies, but real friends with the best of intentions. Then, on the same principle, they made an ally “Friends of Syria” - and at its gatherings they discuss methods of assisting terrorists who kill Syrians and destroy the country's infrastructure.

But, perhaps, the phrase “Friends of Syria” will soon sound in its true sense. Iran has announced that it is ready to hold an alternative conference of the Friends of Syria.

These will be true friends who want a country of peace, not war. Life, not death. Prosperity, not terrorist gang attacks.
Of course, the success of the event will depend largely on the countries that support it. And in this regard, I would like to urge Russia and the BRICS countries to support the initiative of Iran. It is time to put an end to the dirty use of the holy word "friends" when the opposite meaning is put into it. Let the true friends of Syria gather at a single table!

Minister of Health recorded in the security forces? US strengthens sanctions

Washington has recently announced the expansion of sanctions against Syria. Four SAR government ministers fell under them - Minister of Defense Fahed Jassem Al-Freige, Minister of Health Saad An-Naif, Minister of Industry Adnan Al-Sukhni and Minister of Justice Najm Hamad Al-Ahmad.
These individuals are accused of "escalating violence against the Syrian people" and "violating human rights."

Also, if desired, one could find a certain logic in the fact that the ministers of defense and justice are included in the “black list”. The position they have is to fight terrorists and criminals whom the United States considers to be “democratic rebels”.

But inclusion in this list of industry ministers, and especially health care, seems absurd. When did they manage to become security officials, and what relation can they have to “violence” in general?

Of course, from the point of view of the colonialists, why does the colonial country have its own industry if they want to see in it only a sales market? But now it has come to the point that the country that they want to colonize is already not supposed to have healthcare.

In addition, Syrian Airlines and Al-Dunya TV channel fell under sanctions. Carrying passengers to Damascus and back is a crime in the eyes of American officials. And the channel fell under the distribution for "communication with the Syrian government." That is, a certain Syrian media opposes terrorist groups and those who support them. Employees of the channel do not criticize the leadership of the country. Therefore, in the eyes of the “fighters for democracy”, they are deprived of the right to freedom of speech.

A reasonable question arises - how many American channels criticize their leadership? Most of them are loyal to the president and the US government. So they are also connected with the government. A government that recently killed, directly or indirectly, tens of thousands of people in the torn apart Libyan Jamahiriya. It turns out that American television channels deserve sanctions on the very grounds on which they were introduced against Al-Dunya.

But it is not necessary to assume that Washington will impose sanctions on its own television channels. And against the Syrian - injected. But what about the principles of freedom of speech? They can be discarded as unnecessary.

So the last masks fly off the “democratizers” of Syria. Their "majority" turns into a minority, their "friendship" - with a predatory colonial grin, and their "freedom of speech" - silencing journalists.