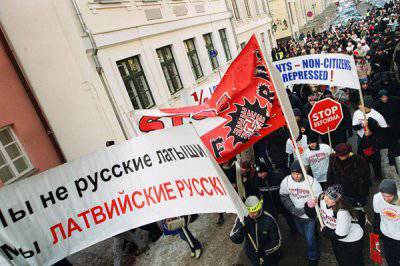 Cultivating national identity is of course great. But it is great only in the case when this cultivation comes, so to speak, from below, but in no way is imposed by means of very perverted forms from above. Namely, from above and in no other way, they try to educate the national spirit in the Baltic countries and, in particular, in Latvia. Sometimes informational reports from this small but insanely proud country make one ponder the question: is there any limit to the insanity or is this state boundless? .. In the case of Latvian politicians, the conclusion is rather a second judgment.


A new manifestation of the oddities of the Latvian political authorities was the desire to strengthen the total, let's say, “Latvianness” of citizens and non-citizens against the backdrop of terry liberalism in the state’s economic system. As a result of the involuntary docking of these difficult-to-join phenomena, the Latvian Tyan-Push was born with one important difference from the book Tyan-Pushing, “sung” by Hugh Lofing and Korney Chukovsky: the antelope from children's fairy tales still had two heads, and not two other places as in the Latvian case ...

Strengthening the "Latvianness" is in the new actions aimed at giving the names and surnames of persons living in Latvia, the desired Latvian "shade." The “Military Review” has already been published by a material prepared by Oleg Chuvakin, in which Oleg told us about how Latvian passportists turn the Shishkins into Siskins, Pyshkins - with Pigkins, with a slight movement of their hands, and after adding them Of the "Latvian" ending to the name Miron it turns into Mironis, which in translation into Russian actually means "dead".

Recently, other episodes of the mangling of Russian surnames have become known, which the Latvian authorities at various levels are trying with enviable persistence to bring under some contrived norms of Latvian linguistics. So a resident of Riga, Stanislav Shebunov, when replacing a passport, unexpectedly turned himself into Stanislavs Seebunovs for the same reason that Shishkin became Sitskin. Passportists explained that when printing passport data, it is unacceptable to use an analogue of the Russian letter “Ш” in the form of “Sh”, as you see, two whole letters, and in “Š” the tick over S is simply “eaten”. How comfortable will the Russian man with the surname Siebounovs? - a rhetorical question ... Approximately from the same series - the transformation of about one and a half thousand Latvians with the name Mark into Marks, and about two hundred Shchukins into Sukins. And what is now for the current Latvian authorities to expect from Marx Sukins in the next elections? .. Support for the current authorities, who have even stolen a name from a man? ..

Today, the Latvian courts are literally inundated with lawsuits from people whose names have been changed when trying to reconcile them with Latvian language norms. In some cases, only the European court, which in this case, which is gratifying, on the side of “those who have lost” their names, helps the sue. The courts of Latvia, by all means, are trying to defend the position of the passport office, in which, apparently, those still bureaucrats-comedians have settled ...

And against this background (against the background of the deepening of the "Latvianness" of the population of Latvia, the obvious attempts to finally break off at least some ties with Russia), the sale of Latvian banks to Russian oligarchs looks extremely strange. While the passportists are suing for the "purity" of the Latvian language with ordinary Latvians, the Latvian financial system goes to foreigners (as an example - to the Russians). The last such precedent was the sale of 100% of the shares of LBB (Latvijas Biznesa Banka) to a Russian businessman Andrei Vdovin, who is co-owner of such Russian financial companies as the Asia-Pacific Bank and Private Bank. To be fair, it should be noted that LBB is still a Russian bank in Latvia since 2011, since 99% of its shares belonged to another Russian citizen - businessman and politician Andrei Molchanov. It turns out that in the territory of the European Union Latvia, which is about to be in the eurozone, the Russian business representatives have launched an active trading activity, reselling the Latvian financial organizations to each other. The case of Latvijas Biznesa Banka is not the only one. But not only Russians are aiming their views at Latvian banks. Great interest in them from, for example, the Scandinavians.

The real sale of controlling stakes in Latvian financial organizations began in the wake of the global financial crisis. It was then that moneybags from our country drew attention to the fact that the Latvian authorities are not able to build any barriers to those who want to buy banks and credit offices in various cities of Latvia. Not that they do not have, but even show interest in this method of “investing” in the Latvian economy. Naturally, the representatives of the current Latvian authorities themselves are silent about the fact that the economy of their country has long been in foreign hands, and in order to divert the attention of the Latvian population from this fact, continues to exercise in the maneuvering of names and surnames, in rhetoric about the need to get rid of the Soviet legacy and other things that are weakly connected with objective reality. That is why the insanity of the Latvian authorities, which was mentioned at the beginning of the material, is, in general, not even insanity, but an attempt to distract the population of Latvia from the problems that the country faces today, and which it will encounter as soon as it gets in the fold of "friends" from the eurozone.

What else remains for the Latvian authorities, if not diversionary maneuvers: “Soviet occupation”, “totalitarian legacy” and everything else. In this regard, it is worthwhile to cite a rather interesting opinion expressed by one of the citizens of this Baltic country on the current Latvia. He compares modern Latvia, whose authorities are torn in the eurozone, with Zimbabwe ... Why? Some parallels are the following: Zimbabwe was once called Southern Rhodesia and was a very successful British colony, one of the most developed countries in Africa. But then the locals suddenly wanted to play independence - with a total ban on everything related to the period of British colonization, and then with the destruction of the economy, total decline in the manufacturing sector, privatization of financial organizations and their subsequent sale to foreign companies, persecution of “ foreigners ". The result - one of the last places in the world in terms of economic development, the rejection of its own currency and the transition to the circulation of the US dollar due to astronomical inflation.

Latvia follows the same path with one important exception: the British used Southern Rhodesia to obtain most of its resources for their own purposes, but Latvia as part of the USSR was like a window light, a showcase, a museum exhibit of wealth and everyday comfort. They did not use it, but, on the contrary, financed it so that even the “occupiers” themselves, like us, Russians, are called by the Latvian authorities, were envious of the white inhabitants of the Latvian SSR. And now, you see, national consciousness leaped out, the spirit of freedom ... But the games of independence are already yielding the first fruits ... As the saying goes, memento Zimbabwe, the Latvian authorities! ..

Ctrl Enter
Noticed a mistake Highlight text and press. Ctrl + Enter
We are
Will the Great Wall save Latvia? Why build a fence on the border with Russia and Belarus?Republic of the former USSR. Latvia: years without “occupiers”
60 comments
Information
Dear reader, to leave comments on the publication, you must to register.