Litvinenko case: who and how is looking for the truth 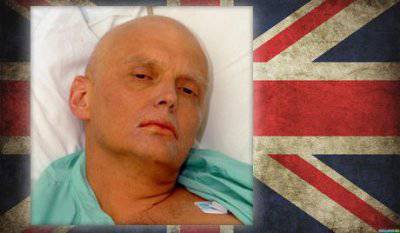 In the newest review of the British press from "BBC" The article from Independent on the protracted investigation into the death of Alexander Litvinenko draws attention to itself. Among other things, the information about the statement of the key witness in the 2006 murder case of the year attracts attention. This man is ready to testify in open court, according to the newspaper correspondent Alex Delmar-Morgan. The journalist writes that we are talking about a man who helped Litvinenko to work on a report on a major businessman associated with the Kremlin.

“The information available to this witness is so important that representatives of the British intelligence services visited him in the United States three times in order to persuade him to testify during the inquiry about the circumstances of Litvinenko’s death.”

This witness is a former Russian spy who now lives in the USA. Before Litvinenko’s death, he worked with him on a secret file for a high-ranking employee of Aeroflot.

The article states that one of the areas of inquiry concerned work that Litvinenko conducted on the order of the private British company Titon International, working in the field of security. Researches concerned certain high-ranking officials in Moscow. The company refused to accept the results of Litvinenko’s work: Titon International was not satisfied with the poor quality of research.

It was here that Litvinenko turned to the former spy, and he made up a much more detailed dossier on persons who were in the sphere of interests of the British firm.

Then Litvinenko did what was not necessary. He shared the results of the dossier with Andrei Lugovoy, who later became one of the suspects in the murder of Litvinenko. This person brought the documents to Russia, where they were in the hands of the security authorities.

In the same issue of “Independent” is an article by Mary Dejevski. The journalist believes that the Litvinenko case is hampered by the British special services.

According to her, after the death of Alexander Litvinenko in one of the hospitals in London, few could believe that even after six and a half years, no one would solve the riddle of his death.

“As in the case of questions arising from the“ extraordinary extradition of prisoners ”, as well as attempts to hide some evidence related to the 2005 London bombings of the year, it all comes down to the objections of the special services. Our special services, not Russia. "

The statement by coroner Sir Robert Owen last Friday only strengthened the journalist's skepticism. In her opinion, Sir Robert not only satisfied, for the most part, the request of the Minister of Foreign Affairs and made a number of important aspects of the investigation inaccessible to the public, he brought them out of the sphere of inquiry. The reason for the decision of the coroner is just connected with the special services.

Dejevski writes that people who knew Litvinenko closely claim that the intelligence services of Britain and Russia have come to an agreement. Premier Cameron does not want anything to prevent the restoration of friendly relations with Moscow. In conclusion, the journalist calls the British system "compromised to the same extent as the Russian one."

In the review "Foreign Press" are given materials of American sources on the Litvinenko case.

The Wall Street Journal reports that the British inquiry into poisoning in 2006, the former KGB agent Alexander Litvinenko, is questionable, because on Friday the judge supported the British government’s demand to hide secret documents from the public. The coroner said that without these documents relating to the possible involvement of the Russian state in the death of Litvinenko and to any facts of the British Government’s prior acquaintance with the threats of his life, the inquiry would not be “complete, honest and courageous.” The publication writes:

“The judge, Robert Owen, suggested that the government might instead wish to hold a public hearing on the Litvinenko death case, chaired by the judges, which would allow a number of documents to be considered in closed hearings without public review.”

The author of the article, Jeanne Whalen, points out that Owen supported the government’s demand to keep secret documents, but not all. He reviewed the materials provided by the government in closed preliminary hearings. He cannot publicly state their content.

After that, the widow of Litvinenko accused the coroner of refusing to “search for the truth about the responsibility of the Russian state for the death of her husband,” says The Huffington Post. A statement by lawyers for Marina Litvinenko says: "This is a very sad day for Litvinenko, a tragedy for British justice, which until recently was respected around the world and tried so hard to expose the crimes committed by the collusion of organized criminals operating from the Kremlin."

“Litvinenko was completely confused by the decision of the coroner to abandon the search for the truth about the responsibility of the Russian state for the death of her husband. The effect of today's decision is to protect those responsible for ordering the killing of a British citizen on the streets of London, and to allow the Russian government to hide behind the demand for secrecy made by William Hague with the support of Prime Minister David Cameron. ”

Renat Abdullin ("MK") reminds that today the main suspects in the poisoning of Scotland Yard considers Andrei Lugovoi and Dmitry Kovtun. They deny their guilt. Lugovoy was tested on a lie detector, and during the three-hour test he was asked many questions, three of which dealt directly with the death of Litvinenko: “Did you do anything that led to the death of Alexander Litvinenko?”, “Have you way involved in the death of Alexander Litvinenko? ”and“ Have you ever had to deal with polonium? ”These questions were answered negatively, and according to the results of the analysis, they were recognized as truthful. True, the British court does not consider the testimony of a lie detector as evidence.

William Dunkerley, whose article is published "Voice of Russia", approached the case from the other side. On drew attention to the fact that the coroner in general is not engaged in their duties and solves problems that his posts are not peculiar. The author of the material indicates that the coroner, who heads the investigation into the death of Litvinenko, “persistently pursues the goal set by himself to find out who killed Alexander Litvinenko. But there is one problem with this desire: it has not yet been officially explained whether Litvinenko’s death was violent. ”

Whether A. Litvinenko’s death was an accident, suicide or murder — this is the question coroner Sir Robert Owen should answer.

But the judge seems to ignore this goal successfully.

Instead, Comrade Dankerley writes, Mr. Owen, in the spirit of adventurism, decided to answer the question “Who did this?” That is outside his competence. The hearings he is conducting deal specifically with the question of clarifying guilt. And the question of what happened to Litvinenko remains unanswered. Even the autopsy report is not published. The coroner has not yet filled out the death certificate as it should be!

Comrade Dunkerley explains that, according to the requirements of the Ministry of Justice, the purpose of the investigation, led by the coroner, is “not to establish a measure of guilt, but to answer four questions: who died, when, where, and how”. It is emphasized that "neither the coroners nor the panel of judges can express their own opinions on any issues other than the above". Finally, the text of the law states: “Not a single verdict can be formulated in such a way as to give the impression that it determines the degree of criminal or administrative responsibility of the person referred to in the investigation.”

But Owen is still looking for the killer, Dankerly said.

However, the search led him to a dead end. The impasse wall turned out to be the British government, which refused to disclose some documents related to the additional investigation (state secret, you see).

Owen claims that he cannot do work without access to secret information. He found a way out of the impasse: he offered to transfer responsibility for the conduct of the case from the coroner to special investigators authorized by the Minister of Foreign Affairs. All evidence will be announced, but behind closed doors, and Owen himself will continue to identify the killer. It seems, the journalist notes, “it doesn’t matter to him that finding the killer of a man for whom it’s not clear whether he was killed or not is a rather dubious task.”

Details of Litvinenko’s death are found in the autopsy results. Why does Owen not publish them? No convincing evidence?

In this case, according to the rules, the coroner must issue an “open verdict”, stating the fact of death without indicating its cause.

And why Owen avoids the final conclusions? Perhaps, says the journalist, behind the case there is something more than we see at first glance.

British authorities in this case may receive a conflict of interest.

First, the issue of prevention: the ability of the authorities to prevent a crime. Litvinenko worked for the British intelligence services. Did they know about the circumstances that could lead to his death? Could they have prevented his death? If the secret services could not save their agent, did they escape responsibility for this? If any fault lies with the British government, then it may be subject to legal claims from the widow of Litvinenko.

Secondly, another area of ​​conflict of interest is the previously sound baseless accusations against Russia. They seem to be largely based on the accusations voiced by Mr. Berezovsky and his supporters. The author of the material told about this in the book Litvinenko's Fake Murder.

“Has the British government been deceived by Berezovsky? And is it now trying to avoid a well-deserved humiliation due to the fact that this fact will become public? ”

Dunkerley believes that Owen is obliged to inform British society and the world community about the results of his work. He must publish the cause of death and clarify it if it is installed, and not pretend to be an investigator.

Channel "RT" reminds how the British government behaved in 2006.

For several weeks, officials and deputies were horrified that a British citizen could be killed in plain sight. The media created the impression that the Kremlin is smoothly finishing off anyone whom he wants to finish off, right on the streets of London.

Five months later, David Miliband, the new British Foreign Secretary, expelled four Russian diplomats in connection with the refusal of the Russian government to extradite Andrei Lugovoi, the main suspect in the murder of Litvinenko. And British-Russian relations have become as cold as ice.

But today there is a warming.

Putting pressure on the Kremlin after the death of Berezovsky, we add, has become unfashionable. And even not so much after death, as after a well-known legal process, in which Boris Abramovich Berezovsky was recognized (in writing) by the judge Elizabeth Gloucester "not trustworthy" and "dishonest".

Observed and commented on Oleg Chuvakin
- especially for topwar.ru
Ctrl Enter
Noticed oshЫbku Highlight text and press. Ctrl + Enter
We are
Results of the week. “Lord, why didn't England please him ?!”Litvinenko: polonium trail leads to the Kremlin, but in a bizarre way
Military Reviewin Yandex News
Military Reviewin Google News
34 comments
Information
Dear reader, to leave comments on the publication, you must to register.