21 May 2013
48
The other day, the “main” one again proved himself, and, as many people believe (even in the highest echelons of power), the country's only economist, Aleksey Kudrin. He said that the ruling party needs to take full responsibility for the current economic stagnation. Like, 2-3% growth of the economy, gentlemen of United Russia, on your conscience. According to Kudrin, the departure of economic policy in the country does not correspond to plans for the modernization of the Russian economy. 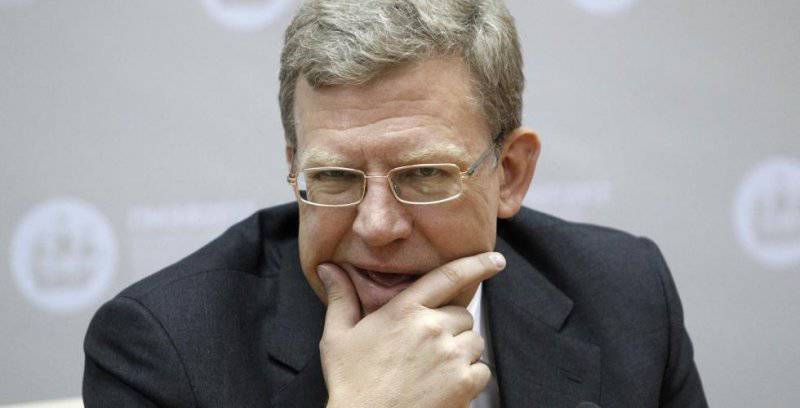 Immediately after these words, the very "gentlemen of United Russia", through the mouth of the chief observer of party values ​​(and the party, it turns out, has them) Andrei Isayev said that Alexei Leonidovich was fundamentally wrong. They also said that Kudrin allows himself to be cynical in general, because he should be responsible for the stagnation, because for many years he, being Minister of Finance and Deputy Prime Minister, did not give them (United Russia) money for modernizing economic leaps.

An interesting correspondence squabble, isn't it ... Its main meaning for us and you - the average citizens of Russia - is that both the former authorities and the current authorities finally finally almost unanimously declared that there were economic problems in the country, and even applied the term of the sample of the Brezhnev era - stagnation. About the decline in economic growth before the statements of Kudin and Isaev, we, as it were, guessed ourselves ... It was suggested by statistics. But in our country one thing is statistics, and another thing is the unwitting confirmation of these statistics by those who, one way or another, should be involved in the development of the country's economy.

Now it turns out that the problem was voiced, but after that for some reason they did not start working to bring the economy out of a stagnant state, but began to look for the guilty. Yes, we know well these guilty. You can at least by name, but the list is too long to get.

And it’s quite “wonderful” that Kudrin calls United States guilty, and United Russia calls Guilty guilty. Doesn't it come to their mind that they are flesh of flesh? .. Yes, of course it comes, but only personal ambitions and interests in this case are above the interests of the Russian people, for which all these bureaucratic hordes must work. And if it is higher, then the search for the switchmen begins. The main thing, it turns out, is to wipe the dirt from your suit, and at the same time throw it over into another's suit. Apparently, neither one nor the other have enough spirit to admit that the current economy is their collective brainchild, and if the “father” and “mother” brainchild turned out to be not the most intelligent and beautiful, then it is foolish to make claims to each other ...

Actually, the accusations go in a mode: you are in power now - you answer, and the answer: you yourself were in power - it means you are the first to answer. Well, this is no longer a policy, but, excuse me, a kindergarten.

By and large, all these gentlemen, who staged the game of judges "guilty - not guilty", need to be assembled in one room, put at the table and not released until the unpromising mutual claims are exhausted, and a real plan of withdrawal of the Russian economy from the rather unintelligible state in which it is now located. And if such a plan is not presented, then you can find others. As you know, we have no irreplaceable ones, especially if we take into account the current direction of economic policy.

Well, in fact: the official forecast of economic growth for the next year is within 2,6%. Once again: 2,6% ... For the first quarter of this year, the economy has grown by 1,6%. Not that nothing at all, but almost nothing. Even in the 2009 crisis year, it was better. What is it? A new crisis or is it the consequences of flaws in dealing with the previous crisis? In any case, such growth is clearly not enough to overcome the crisis ridges.

Of course, you can again look for the best comparisons for yourself with the economies of other countries: with Cyprus or Greece, for example, where, they say, there is a total recession in general, and we have some kind of growth, but growth. But so in that and salt that Russia is not Cyprus and not Greece. One resource base of our country is such that it is clearly inappropriate to talk about any difficulties in the energy sector or the manufacturing sector. The same Greeks with Cypriots from this question will clearly look at us and say: we would have your problems ... And, indeed, it is even scary to imagine what would happen to our financial system, if, God forbid, we would have such to put it mildly, the modest resource potentials that the listed European Union gentlemen have.

And on this background, our financiers allow themselves not to look for ways to achieve economic growth, but they are engaged in the most natural trolling - well, we, they say, as if the opposition ... And the ruling party against this background also gives out "pearls" ... Take at least Prime Minister Dmitry Medvedev, who, while in Sochi, also allowed himself to characterize the state of the Russian economic system. According to Medvedev, our economy, quote: "mediocre." And here is another quote from the Prime Minister regarding the situation in the country's financial system:
I really would not want to be such as youth slang is used to say, “sour”
.

What, however, exact economic terms are chosen ... The economy is “mediocre”, but not quite “sour”. It is strange that Dmitry Anatolyevich, like Deputy Isaev, did not recall Kudrin. But it would be completely in a single party spirit: they say, if anything, then all the questions to the former finance minister are for a long time out of the Government, but we, you see, cannot get rid of “his legacy” in any way.

And if you put aside all these mutual accusations of Russian politicians to each other, try to take a serious look at the Russian economy, then you need to determine the reasons for stagnation. One of its reasons is that the government has run out of economic incentives. In limbo is a small business. Against this background, the legislative base is almost completely absent, which will help Russia to join the WTO without any particular problems. We have been trying to explain for so long that joining the World Trade Organization is good, but for some reason even after joining no real legislative changes in this regard have been created. And according to this: our agricultural products start losing even on the domestic market of imported products, our transport companies are also pressed by foreign competitors, not everything is in order with the introduction of metallurgical products to the world markets, we are trying to dictate prices for our gas ... Why doesn’t are the barriers built? Why are there almost no restrictions for the implementation of imports, seriously beating on domestic producers? Why we do not put any of the competitors in place?

One gets the impression that neither the Government nor the legislators have answers to these questions yet. And Kudrin, come and be pleased ...

Ctrl Enter
Noticed a mistake Highlight text and press. Ctrl + Enter
We are
Results of the week. “Bonjour to you in your hut”Kudrin against Rogozin, or New revelations of the ex-minister
48 comments
Information
Dear reader, to leave comments on the publication, you must to register.