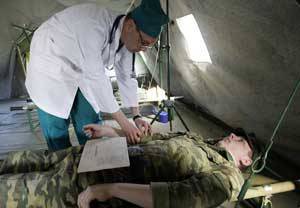 
These omissions are primarily related to the proposals that at one time came from the Ministry of Defense. The proposals had the following character: instead of several stationary military polyclinics and hospitals, it was planned to commission mobile hospitals. On the one hand, the idea seems to be good: soldiers and members of their families, who are stationed in remote regions of the country, would be able to receive medical care directly on the ground. But at the same time, mobile hospitals can not be as effective in providing medical services as inpatient medical institutions. For example, a mobile hospital can not always be equipped with special medical equipment. If equipment type Planmeca in Moscow is located in many medical hospitals, now it is obviously problematic to transport it and install it in a new place.

In addition, the closure of inpatient military medical facilities may lead to a shortage of beds for those military personnel, military retirees and their families who are accustomed to receive help in these hospitals. It turns out that they will either have to look for other hospitals, or expect the arrival of a mobile hospital, and the schedule for these trips would still have to be approved.

There is one more question: why use mobile military hospitals in peacetime. They show themselves remarkably well in places close to the territory of the conduct of hostilities, but the effectiveness of their use under normal conditions is somewhat doubtful.
In principle, if the Ministry of Defense already has a desire to use mobile hospitals, then it is quite possible to implement it without closing hospitals.
Ctrl Enter
Noticed oshЫbku Highlight text and press. Ctrl + Enter
We are
Military Reviewin Yandex News
Military Reviewin Google News