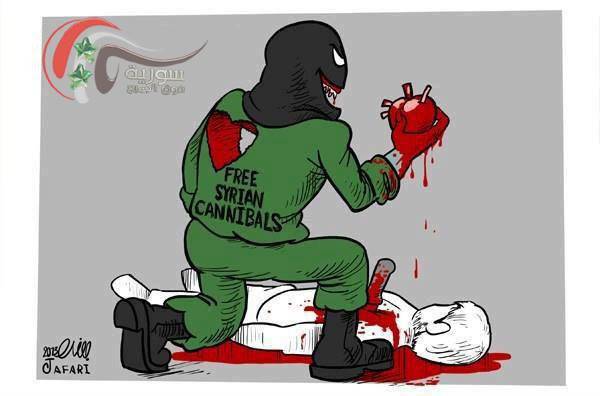 When the terrorists committed the most terrible terrorist attacks in Damascus and other cities of Syria, from which hundreds of people died and became disabled, the world was blissfully silent.

When the gangsters calling themselves “the opposition” staged a barbaric massacre of people in the village of Hulia, the Syrian army was blamed for everything and called for immediate military intervention. Although, as it turned out later, members of those families who went to the demonstrations in support of the legitimate authorities were killed. But the world was silent.

When the bodies of people killed by militants, including three school teachers, were removed from a terrible pit in one of the Damascus quarters that had been in the hands of terrorists and recaptured by the army, the world did not notice.

The recent terrible incident, when terrorists in the province of Idleb cut off the heads of captive helicopter pilots and defiantly held them over the grill, went unnoticed. This, too, was presented to the media as a “victory of the revolution” - what, the helicopter was shot down, well done!

When the sacred for every inhabitant of Earth Victory Day, May 9, 2013, gangsters, as if returning from the forties of the fatal, made several terrorist attacks in Damascus, in which people were killed and injured - an explosion on Bab Toum Square, shelling from a hospital in Al district -Kassa, shelling of residential buildings in Dzharaman - no one in the UN and human rights organizations, and not uttered.

The world was silent, and the Western circles thought about how to step up assistance to those who create it under the pretext of "developing democracy" and "fighting dictatorship." Involuntarily, the words of Manon Rolan, spoken to her upon entering the scaffold, recall: “O freedom! How many crimes are committed in your name! ”
And then, finally, there was the atrocity of the "rebels" with whom the world was shocked. The video captures the real “opposition” cannibal, as if coming from a terrible tale. No, not from a fairy tale, rather, from a horror movie. With a knife in his hand, he cuts the chest of the killed soldier, cuts out the heart and eats it in front of the camera. Drops of blood flow down the Islamist beard. Behind the scenes, his comrades say that they will eat the heart and liver of all Alawites (this is one of the currents of the Muslim faith, especially hated by the rebels. And if the "opposition" wins, no one and nothing will keep it from the Alawite genocide on religious grounds. The cries of “Allah Akbar!” Are heard (it turns out that even THIS can be covered up in the name of God).

I remember a similar case in Libya two years ago. Then the soldier of the Libyan Jamahiriya was captured by similar rebels. He turned out to be not a timid and, during interrogation, told the executioners - “oppositionists” from Misrata: “My heart beats for Muammar Gaddafi!” In response, the militant who had brutalized someone else’s courage and snatched it.

"Opposition", created by the same overseas forces, has a similar style, wherever it may be - in Libya, in Syria or any other part of the world. It seems that all the most evil, the wildest, the most barbaric is extracted from the prehistoric depths and gathered here in the fight against recalcitrant Arab countries - first Libya, now Syria.

Even such a biased “human rights organization” as Human Rights Watch was forced to condemn the atrocities. However, there were those who started talking about the fake video. Or that it was filmed in Srebrenica in the middle of the 90's and over-sounded. And in general, it is, they say, a provocation with the aim of blackening the sacred image of the Syrian "opposition" fighting for "freedom."

It turns out that the video got to Human Rights Watch in April, but he was not given a turn. Not in a hurry to condemn. All such slander and their “evidence”, even riveted “on the knee”, are perceived quickly, unequivocally and without a shadow of doubt.

But it turned out that on the video, after all, the Syrian “oppositionist” is really - a certain Khalid Al-Hamad, nicknamed Abu Sukkar - one of the leaders of the so-called “Farouk Brigades”. This team is known for the episodes of the war in the Homs Bab Amr quarter, when all the “democratic” media supported the “insurgents” and squealed about the “atrocities of the regime” (that is, it was not necessary to fight these sadists, but to give them the right to establish their own democracy!) True, later this warrior broke away from the Brigades Faruk and created his own group. Now this fact is used as an excuse (they say, "he broke away from us, and we are not like that"). Although in Syria there is no single opposition and, by and large, nothing to break away).

And this Al-Hamad is the favorite of Al-Jazeera TV channel. There he was often presented as a poor civilian, protesting by harmless methods, an unhappy demonstrator and a civil activist. However, what about the Qatari Al-Jazeera, if its morals are eloquently illustrated by the next episode. One of the announcers of this, if I may say so, the TV channel, Gad Weis, who imagines himself the biblical Herodias and Salome in one bottle, demanded on the air ... the head of Bashar Al-Assad. Generously promising a million dollars for such a gift. What is it like not returning to the wildest times?

After the act of cannibalism, the American magazine TIME provided the cannibalist with a tribune and interviewed him. Al-Hamad has long poured on the topic of how he hates the Alawites. He also boasted with another of his “feats” - how he sawed one Alawite with a saw into small pieces.
The leader naively believes that after such commercials the army will be afraid to fight. In vain! They only kindle righteous anger and rage among the soldiers and all honest people. After such a spectacle there arises a natural desire for retribution. In the same way, the fascists, who publicly hung up the Soviet partisans and underground fighters, believed that they would intimidate the people, but the sooner the retribution came for monstrous crimes.

An act of cannibalism has been revealed to the world. He shuddered at first at such cruelty ... and froze again. The lesson did not go in store. Instead of once and for all abandoning the support of overt cannibals, this world has gone mad. And the General Assembly by a majority vote supported the resolution, in which the Syrian “opposition recognized as the representative of the people of Syria.

Only 15 of May - on the day when this resolution was adopted - the gangsters blew up a car in Umayyad Square with the help of a remote control, killing one person and wounding another. On the same day, a demonstration of Palestinian refugees in the Yarmuk camp was shot. Previously, these people were driven out of their homes, their homes and shops looted. And when they tried to return, the bandits opened fire on them, several people were injured. One woman passed away from her wounds. Moreover, it happened on a sad anniversary - on the Day of the tragedy of the Palestinian people, when it was expelled by the Zionists from their own land. The shooting of Palestinians by terrorists in Damascus once again shows that the gangsters and the external Zionist enemy of Syria are in a close relationship. On the same day, in the metropolitan area of ​​Mezze, militants attempted to assassinate a representative of one of the most peaceful professions - a doctor.

But those who voted in the UN General Assembly on the anti-Syrian resolution ignored all these crimes.

So, one of the "oppositionists" devours human organs in front of the camera. Others bombard hospitals and homes. Third - sit at international gatherings and require the bombing of their own homeland.

But neither those, nor others, nor the third ones could not exist without the support of civilized, neat, dressed in expensive tuxedos of gentlemen sitting in richly furnished offices and halls. Without their support, the Syrian army would have long been able to cope with the cannibals.

... I remember again the day of October 20 2011 of the year ... The same "rebels", as in Syria, brutally murder the leader of the Libyan Jamahiriya Muammar Gaddafi. Then his body is dragged through the streets of his hometown of Sirte, after which they are transported to the rebellious Misurata and put on public display. Next to him is the body of his son Mutassim. At the other end of the planet, US Secretary of State Hillary Clinton watches these footage on a mobile phone. She seemed to “forget” about how she had met Mutassim for several years before, shook his hand and smiled ... And now she smiles with another smile, a joyful cry “Wow!” Breaks out of her chest.

With his womb cry, Hillary Clinton untied her hands to all cannibals, all defilers of bodies, all torturers and murderers! They realized that the world's strongest power gives them a complete carte blanche to commit any, even the most brutal, crimes - all they need is to declare themselves “fighters for democracy” and call for bombing their country!

And now - before mankind appeared frankly cannibal video. Immediately they started talking about the fact that the desecration of the dead was a war crime, they immediately disowned and disassociated themselves from this “rebel”, immediately declared that they would clear the Syrian “opposition” from such criminals. Where were they before? The “opposition” has already said that it will refuse terrorism - but terrorist attacks and shelling of civilians continue every day. And no one in the West disavows their support.

Using such a carte blanche, impunity "oppositionists" continue to boast about their "feats". A few more creepy commercials are distributed on the Web - in the city of Rakka, gangsters killed three captured soldiers right on the square. In Deir ez-Zor, on the banks of the Euphrates, 11 prisoners were shot in the back of the head. And a photograph in which a bearded fighter in a plaid scarf holds the head of a young Syrian ...
It was against this background that the General Assembly adopted a resolution in which there is not a word about the evil deeds of the “opposition”, but the entire responsibility is placed on the Army, which fights against sadists and cannibals.

Those who voted for this terrorist resolution, you are no better than that cannibal! Look again with your pet video and say "Wow"!

Mrs. Clinton will thank you.

Ctrl Enter
Noticed a mistake Highlight text and press. Ctrl + Enter
We are
Terrorists staged a new massacre in AleppoSyria: Americans scare themselves, and Asma Asad buys chairs
134 comments
Information
Dear reader, to leave comments on the publication, you must to register.