The Fridinsky case: the head of Oboronservis gave in on the fourth attempt ... 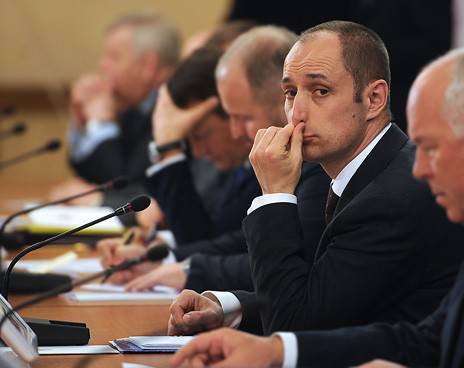 The world-famous Oboronservis company, whose 100% stake is owned by the Ministry of Defense, that is, the state, again showed itself in the week. A five-page representation of Sergey Fridinsky, the chief military prosecutor of the Russian Federation, came to the Russian defense ministry in which he states that during his leadership work in Oboronservis OJSC such gentleman as Sergey Khursevich (head of Oboronservis since July 2009), the government was severely financial damage. It was revealed that the amount of damage only on the fact of the purchase of Italian Iveco armored vehicles, which (the purchase) Khusevich supervised, was not less than 145 million rubles.


It turned out that about a year and a half ago Khursevich received money from the state budget both for the purchase of Iveco and for the processing of all necessary customs documents. On payment of customs duties, Sergey Khursevich decided to “save” and bought paraphernalia for medical equipment (stickers with red crosses, flashing beacons). It was exactly like medical equipment that armored cars entered the territory of Russia, which was reflected in special documents. Only from the presentation of Fridinsky remains unclear: where did the money that the heads of Oboronservis “saved” at customs have gone to - whether he, taking care of the fate of the Ministry of Defense, put everything up to a penny saved back to the military budget, bypassing the budget of customs services, whether this money went to the personal needs of Mr. Hursevich himself. And although the fraudulent scheme can be seen in both of these cases, but if Khursevich saved it for the Ministry of Defense, then, you see, you would also get a jacket award for those awards that he already has (Order of Merit for the Fatherland ”II degree) ...

Sergey Fridinsky, continuing his presentation to the Minister of Defense Shoigu, states that the head of Oboronservis is involved not only in fraudulent schemes with budget funds, but also in countering the work of inspection bodies in the offices of Oboronservice. Such activities of Khurssevich are described by the chief military prosecutor with the following phrases: “he did not ensure the observance of legality”, “he embarked on the path of breaking the law” The total amount of damage from the activities of Oboronservis, at least, says Sergey Fridinsky himself, amounted to about 5 billion rubles, of which only one-fifth was returned to the treasury. The phrase “Where is the money, Zin?” Which has recently received a second birth describes the situation with the work of Oboronservis OJSC for the past few years.

So why did the head of the Main Military Prospect Sergey Fridinsky write his submission to the Ministry of Defense? It turned out that he had asked to dismiss Khursevich from the post of general director of Oboronservis. Hmm ... Somewhat unexpected development of events, isn’t it ... On the one hand, “did not ensure the observance of legality,” “embarked on the path of violation of the law,” and on the other hand, please dismiss from your post ... How do these things fit together is not clear. If Sergei Fridinsky has every reason to suspect Khursevich of embezzling budget funds, then what the hell is the idea ... Where is the criminal case?

A criminal case, but not one, in fact, there is. Only now the name of Sergei Khursevich with reference to these criminal cases sounds at some distance. There is information that the case was initiated against some organizers of the purchase of Italian armored vehicles under Article 194 Part 2 Section “d” “Evasion from paying customs duties levied on an organization or an individual on a large scale”. But with reference to Khursevich (and after all, it seems he is directly related to the organizers), the investigation states that the case against this person, quote: “may be initiated” (at least, no criminal case against Sergey Khursevich at the time of the preparation material was not introduced).

Khursevich was simply fired ... The board of directors of Oboronservis met, conferred and decided that Oboronservis was no longer on the way with Khursevich. That is, for almost 4 years, when one after another the unpleasant facts of budget funds diversion through various front organizations, fraudulent schemes in the purchase and repair of military equipment, the sale of real estate of the Ministry of Defense under the “flag” of the inappropriate and inefficient, Oboronservis with Hursevich was on the way, but now - no ... Apparently, in order for these paths to diverge, a prosecutor’s dispatch about the real “merits to the Fatherland” Sergey Khursevich to the Minister of Defense was needed ...

In general, anyway, Khursevich, who had just recently declared that he would do everything to return his honest and immaculate name to Oboronservis, lost his post. And in this regard, there is an amazing incident: Khursevich was dismissed for those “blunders” that the prosecutor of Fridinsky indicated in his presentation, but only the cases against the ex-general director of Oboronservis were not instituted, the charges were not formally brought. If so, then it turns out that so far all the words that were expressed in his submission addressed to Sergei Shoigu Fridinsky are nothing but a slander ... After all, if there are verbal accusations, then the criminal case against this person should be initiated, and without nomination the charges (any lawyer will confirm) all the talk about Khursevich’s guilt can be exposed as slander ... An obvious incident that the Main Military Prosecutor’s Office, if she is not afraid to bring the Oboronservis case to the end, should be corrected in the near future.

By the way, the presentation of Sergei Fridinsky on the figure of Sergei Khursevich, as it turned out, is far from the first. Prior to the current submission, the chief military prosecutor, as he himself declares, endured the submissions to Khursevich’s relations three times (all in 2012 year). Two presentations are under the Minister of Defense Anatoly Serdyukov, one at the very beginning of his work as Defense Minister Sergei Shoigu. However, none of the three previous representations Fridinsky was not given attention. Only from the fourth time did Sergei Fridinsky manage to reach out "to heaven". Amazing patience at the head of the military prosecutor's office - there is nothing to say. Well, if we really pay attention to the submissions of the chief military prosecutor only from the fourth attempt, is it not time to smear the mechanisms of the bureaucratic apparatus? But it’s too long a delay time ... We’ll harness oh how long! How quickly we go - that is the question!

Sergey Shtykulin, State Counselor of the Russian Federation, Class III, who served in Afghanistan in the border troops of the KGB of the USSR as an officer and was awarded a dozen awards, including military ones, was appointed to fulfill the duties of the head of the company. Can a former border guard (although there are no former border guards) really straighten Oboronservis’s reputation as fairly smeared with corruption and fraudulent dirt? I want to hope so. The main thing is that the position of the general director of Oboronservis does not become a zits-chairman ... But what kind of “zits” is there if all the main figures are free with such statuses that they cannot be brought to criminal responsibility.