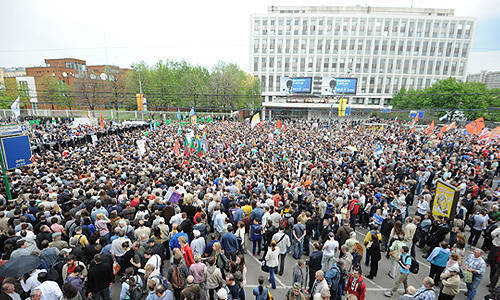 In the current era of the ideological timelessness of citizens, only a negative agenda unites


Russia is a rich country, even excessively. A huge territory with huge reserves of raw materials, bringing huge profits to the huge (for the current economic situation) number of money bags. And, of course, our land is rich in talents, heroes, and art. That's just the ideology did not work out. As such, it does not exist - not only from a formal point of view, according to the article of the Constitution, but in fact. Where are these “clamps” that were suddenly spoken about at the top? What do they look like?

Research and just statements on this topic, including statements from the brilliant mouths - not to count. But what's the point? The authors of the next “ideological” research conducted at the Higher School of Economics, even in the title of the work, did not indulge in allegories and called it sharply: “Russian ideological timelessness in the mirror of social media”. That's right - "timelessness."

And really, what time do we live? What a capacious wording it will be indicated in future textbooks stories? What is the century now? Nanotechnology, with the half-dead Skolkovo and the “effective” Rosnano? We would have time to get into our new technological order with our exclusively raw-material economy, the real diversification of which is taking place so far in the Plans and Concepts ...

But on social networks, modern ideology (or rather, its amorphousness) is reflected extremely accurately. This is the insistence of the authors of the work from the HSE under the direction of Emil Payn. The professor himself and the doctor of political sciences in an interview to Ogonyk explained the representativeness of this research technique. “Today, when Internet users in Russia accounted for more than 51% of the adult population, and by the amount of time spent on social networks, our fellow citizens were among the world leaders, it became possible to analyze not just momentary assessments of respondents, but stable ideological associations with a specific identity and in a special language, ”said Mr. Pain.

The Internet did not open to the American political scientist: he showed no signs of a common ideology in society, but four groups stood out confidently and completely vividly: pro-government, "left", nationalist and liberal. The watersheds between them lie so clearly that it seems to look for a common denominator here - an unpromising occupation. But not everything is so simple. There are at least two topics that unite "zaputintsy" with "internal immigrants", and those and others - with their "executioners" on the right and left. This, says the head of the study, is a certain general skepticism in views on the development of the country, which does not bypass even the supporters of the current government. "This is the most important sign of timelessness: the present is ugly, and the future is unpromising," the expert noted.

Another “rallying” theme is xenophobia. “Islamophobia, Kavkazofobiya, migrant-phobia are common even among liberals, and in other trends they are even stronger,” complained Emil Pain to the publication. Such a basis, according to the scientist, can be the key to the emergence of the leading group of "ideological mutants" who will lead the ideology, mixed with xenophobic nationalism and left-wing social populism, into the vanguard. But the liberals, as Mr. Payne actually stated, remain outsiders among the above-mentioned groups: “We suppose they (liberals. - Note KM.RU) have done a lot to instill in the majority of the population a holy hatred of“ the party of crooks and thieves ” . But the list of millionaire ministers, described as “supporters of economic liberalism,” is published, and then a post appears on the Internet: “Liberativists have settled down well: they steal themselves, and they dump Putin on them”. There is no trust. ” It is strange that the researcher did not make a reservation about the ambiguous positioning of the author himself, whom he cited as an example of a “obzyvalki”. Alexei Navalny only liberals can not recognize their own. Valeria Ilinichna, for example, is exactly against.

In principle, the one who seeks will always find, and the “idea of ​​the beautiful” that unites one and all can be found today. The only question is whether everything can be called ideology. For example, the same ideas about social justice that divide and defend (let each with its own connotation) all groups. But this is the situation of ideological stagnation: they have grown to the realization of the value of social justice, but not to socialism. And this is just one example of a superficial attitude to fundamental issues living in civil consciousness. A couple of decades of “timelessness” makes itself felt.

A famous publicist, chairman of the supervisory board of the Institute of Demography, Migration and Regional Development Yuri Krupnov suggested his own version of the “roadmap” of finding a nationwide ideology in an interview with a columnist for KM.RU

- The fact that the Higher School of Economics presented is, if it is possible to say so, the sociology of the decay, downward, degradation trend. It is expressed in the very presence of this clear division of society into these four groups escaping from the sinking "Titanic". They must be redeveloped for the development of the country. On their basis, a qualitatively new social configuration should emerge, governed by the ideology of planetary development. Without it, Russia simply has no prospects, no future.

On the territory of Russia, a source should be created for generating social wealth of a global scale, quite comparable with the entire world economy. This is achievable through seven creative revolutions - demographic, industrial-technological, energy, urban planning, anthropological, Far Eastern and post-Soviet integration (the final formation of the Eurasian Union).

It is necessary to discuss the implementation of these seven revolutions, to discuss the order of the hundreds of country development projects currently available and about a thousand strategic investment projects that will raise every municipal unit of Russia. This is the very agenda of the planetary development of Russia, which will set the possibility for the country to enter a positive, anti-decay, anti-degradation course and the creation of a new ideology - the ideology of development.

- Excellent prospects, but who will do all this?

- We have wonderful young people, primarily in the regions, which have already mastered and continue to gain unique experience based on Soviet (by inertia), Western and modern Russian sources. These young people today create a certain pressure on the authorities. In the “crooked” form, this is so far expressed in various kinds of “swamp” protests, where the tone is set by the so-called “creative class”, which in fact is partly parasitic. But the very pressure of young people on power is the same as a request for development! And then the whole thing is in the government itself.

And, as I see it, Vladimir Putin is gradually beginning to understand this, which can be judged by his pressure on the government, by the singer’s resignation of degradation and the collapse of the country, Vladislav Surkov. Yes, we are slowly getting out to a new road, but we must also be aware that only mild criticism of the government will not be enough here.