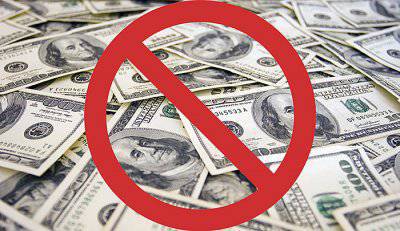 On the Military Review, we often discuss the topic of Russia's economic security. One of the burning issues is the use of foreign currency as the main tool for the implementation of trade between the Russian Federation and its trading partners and the substantial enough dependence of the domestic economy on the state of the US dollar and the single European currency. On the one hand, the dependence on the state of the world's leading currencies is easily explained: Russia is positioning itself as a segment of the global economy; but there is another side to this - the actual dissolution of the Russian financial system itself in the global economic space, which, with a relatively low level of competitiveness, puts the entire country's economic sectors in a difficult position.


It is quite natural that on this background there appear various proposals on how to conduct economic life in such a way that the Russian financial system grows and has its own, let's say, pleasant face. Here are just often the sentences are heard such that can be called, at best, strange and ill-founded.

One of these proposals literally the other day came from the Duma faction of the LDPR. The person who voiced the idea of ​​the need for a certain metamorphosis in the Russian economy became a deputy (liberal democrat) Mikhail Degtyarev. His idea is that in the Russian Federation in the near future a law should be passed that will prohibit the use and storage of the dollar in the territory of the Russian Federation. The deputy Degtyaryov did not limit himself to the idea, but prepared a whole bill on this matter.

He justifies his idea as follows: given the macroeconomic situation that exists today (well, at least the deputy Degtyarev sees it), the dollar system will have to fall apart over the next 4 years. Such a conclusion is Mikhail Degtyaryov, who graduated from the SSAU (Samara State Aerospace University) in 2004, specializing in “engineer”, the same university (economics department) in 2005, specializing in “manager” and even in 2012 year - MIMTS (Moscow Institute of World Civilizations ) in the specialty "lawyer", made on the basis of the fact that the dollar today is unstable. And Russia in 2017, supposedly will be the country that will suffer from the fall of the dollar system among the first, because its citizens (that is, we have with you) are on hand (again, according to Degtyaryov himself) in sufficient numbers dollars.

The MP from the LDPR faction says that Russians need to be protected now from the financial crisis that in Russia will collapse in a few years due to the collapse of the dollar system, at the legislative level “inviting” them to get rid of their savings in US currency during 2 years go to any other currency in the world, except the US dollar (there is no question of the indispensable use of the ruble). At the same time, Mikhail Degtyarev emphasizes that according to his bill, if one or another Russian does not get rid of dollars for 2 of the year, then this very Russian will be expected to have the banal confiscation of the American currency in favor of the state. This, according to the liberal democrat, is a quote: it will increase the prestige of the Russian currency. Everything is liberal, everything is democratic ... One gets the impression that Mikhail Vladimirovich still messed up something when choosing a party ...

So, the proposal of a person with three higher educations, received by 30 with a little years, was announced. Now he is building up to analyze this bill, which Mikhail Degtyarev himself is positioning as his own child (well, really born without the participation of the founding father of the LDPR party, Vladimir Zhirinovsky). Does that happen in the LDPR? ..

Refusal to store and use US currency in Russia. Initially, there is a feeling that the bill is quite interesting: it seems, really, why should a Russian citizen keep money in the form of the American dollar? What about our state currency or not? But with a more thorough look, several obvious inconsistencies emerge in the bill of Mikhail Degtyarev.

First mismatch. Referring again to the bill, we read: the prohibition of the circulation and storage of US currency in the territory of the Russian Federation. Here it must be emphasized: it is in the territory of the Russian Federation It turns out that if this or that Russian citizen so attracted to keep his savings exclusively in dollar terms, then the bill itself pushes him not to exchange dollars for rubles at all, but to withdraw these same dollars into foreign banks. Immediately you might think that the deputy Degtyarev is thus trying to cut off the ways of “withdrawal” for Russian officials, literally forcing those to exchange the foreign currency they have for Russian rubles, but here looms second mismatch.

It lies in the fact that the deputy Degtyaryov proposes to impose a ban on the circulation and storage of only the American dollar in Russia, but is not going to impose any prohibitions on the circulation and storage, for example, of the same euro ... Does a liberal democrat with an abundance of higher education see the euro currency more stable than the dollar USA? If, in his opinion, this is so, then Mikhail Degtyarev is hardly familiar with the global currency situation and the state of affairs in the global economy. To say that the dollar system will collapse in 2017, but at the same time, to say nothing about the possibility of the collapse of the euro system is, to put it mildly, not entirely correct. The fact that the dollar bubble can really burst is said by many domestic and foreign economists. Only here, unlike Mikhail Degtyaryov, these same economists are inclined to see that the situation with the euro is no better than the situation with the American currency. It is only, for example, that the Greek state finally admits its insolvency, which, in principle, we all know, how the eurozone will receive such an internal blow that Spain, Ireland, Portugal, Italy and other badly indebted people can then fall off. And what, according to Mr. Degtyaryov, will the Euro-crisis not affect the Russian economy, unlike the crisis in the US financial system? .. It will say how it will. Why? Because there is also, at least one discrepancy of the draft law under discussion and of objective reality.

The third discrepancy. MP from the LDPR faction Mikhail Degtyaryov proposes to prohibit the circulation and storage of dollars for Russian citizens. But for some reason, the same Mikhail Degtyaryov does not mention that the Russian Federation has a reserve fund, whose funds are not kept in Russian rubles. If you believe the first deputy head of the Central Bank Alexei Ulyukaev, then Russia keeps its reserves as follows: 2% - Australian dollar, 3% - Canadian dollar, about 8,5% - pound sterling, about 40,5% - euro and 46% - US dollar. If we take into account that the volume of Russian reserves today is almost 2,6 trillion (in ruble equivalent), then there are dollars worth more than 1,1 trillion rubles.

In this regard, the attempt of Mikhail Degtyarev at the legislative level to force the Russians to refuse to store their savings in dollars is clearly not compatible with the policy of the Russian Government. If it comes to that, then in order to increase the prestige of the ruble (what a representative of the LDPR Duma faction says), you must first pay attention to the currency expression of Russian reserves, otherwise you somehow strive to start from below ...

The fourth discrepancy. Mikhail Degtyaryov as an engineer, manager, lawyer and deputy should understand that if Russia needs to protect someone from a possible financial crisis, then not only and not so many of those citizens who are used to keeping their money in dollars and even bank accounts. Obviously, if a person has such a weakness (craving for a dollar bank account), then he will cope with any crisis in an example better than a representative, for example, in the public sector or an ordinary pensioner, who, if they are used to “invest” their income , then, perhaps, in the grocery basket and in the receipt for payment of "communal", which they regularly send ZhEKi, TSZH and other offices ... And, forgive me, as the deputy Degtyarev is going to protect from the crisis of these people - not burdened with bank accounts in dollar terms ? .. Really choose the path of Robin Hood: select "green wrappers" from the rich and give to the poor, so that they immediately changed them for rubles? The option, of course, is interesting, but what does Vladimir Volfovich say, for example ...

But many may note: ah yes Degtyarev, ah yes a patriot - he took and offered to eliminate the dollar component of the Russian economy! But if “ah yes a patriot”, then why only the dollar one? .. And why they gathered to eliminate exclusively in private pockets, not even offering to change the financial policy of the entire state. In general, the bill proposed by the liberal Democrat Degtyarev gives an obvious populism, which is designed for people who are not just poorly familiar with the economy, but also hardly conscious that economic patriotism and concern for ordinary Russians have little to do with the desire to scratch on the bottom of the same ordinary Russians. Although Mario Draghi, for example, will be pleased ...

PS From the microblog of deputy Mikhail Degtyarev:

I have 5 US dollars hanging on the fridge. With them we lure food.

Ctrl Enter
Noticed oshЫbku Highlight text and press. Ctrl + Enter
We are
Situational analysis of the death of the MH17 flight (Malaysian Boeing 777), made on the basis of engineering analysis from 15.08.2014How the US dollar turned into a big financial mystification
72 comments
Information
Dear reader, to leave comments on the publication, you must to register.