14 May 2013
169
The political struggle continues in Georgia. It would seem that after the defeat of his party in the parliamentary elections and the wave of information shedding light on the events of August 2008 in South Ossetia, Mikhail Saakashvili should think about somehow trying to save his face before the Georgian people and retire. avoiding a real criminal punishment (and the punishment can be quite real). But the current president, apparently, is going to storm the power Olympus of Georgia again, using every opportunity to find the main culprits that during the years of his rule Georgia did not join either NATO or the EU, and in addition lost more than a third of the territory a grand military provocation organized by Saakashvili more than 4 years ago. Mr. Saakashvili is not going to admit his guilt, but he is going to find it in the activities of the current majority in Georgia and, in addition, present new scenarios of his “Napoleon” plans.


So, about the “Napoleonic” plans of the outgoing president of Georgia and his “army” this autumn in order. To begin with, it is worth noting that Mr. Saakashvili, in his political activities, chose the following tactics: Saakashvili exposes any conversations to the current Georgian Prime Minister Ivanishvili about the need to normalize relations with Russia as trade in Georgian national interests. Obviously, in this way, Saakashvili, with his entire party retinue, wants to get support among those Georgian citizens who in recent years have become infected with the stereotype of Russia as the number one enemy with whom it is necessary to talk exclusively from a position of strength. It was about the position of power in terms of “conversations” with the Russian Federation that Dimitri Shashkini (Dmitry Shashkin), the associate of President Saakashvili, reflected in one of his recent interviews with the Georgian media. The main military department of Georgia, Lieutenant Shashkin (yes, during his work as the head of the Georgian Ministry of Defense, he was exactly a lieutenant, and he still, in principle, still remains) headed from July to October 2012. 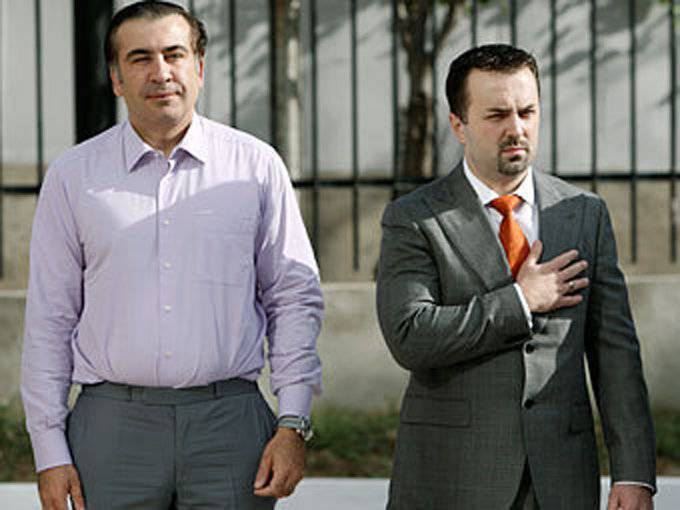 Shashkin, in terms of quotations from Winston Churchill, reminds Georgian citizens that Russia respects only strength, which makes it related to the “evil empire” - the Soviet Union. The ex-minister, who was born on the territory of the Ukrainian SSR, declares that Russia is an Asian country that perceives any act of goodwill as a signal for annihilation.

Until the state idea of ​​Russia changes, it will remain the main threat and enemy of our country.
Mr. Shashkin under the words about the “act of goodwill” apparently hints at the “goodwill” shown by the Georgian army on the orders of Saakashvili in August 2008 of the year. Apparently, the “Asian essence” of Russia, in his opinion, lies in the fact that she (Russia) moved troops to help its peacekeepers, who were shot by “Europeanized” Georgian military from artillery and volley fire systems, to help Russian citizens living on territory of South Ossetia. Well, what if the main sign of the Asian essence of the whole state is to come to the aid of their compatriots, no matter where they live, then let Russia remain at least three times Asian country (according to the classification of Lieutenant Shashkin), unlike the "European" Georgia Mikhail Saakashvili, who is trying to cover up his fifth point with an EU banner and gave orders to commit war crimes.

But the most interesting thing is not even the fact that the representative of political forces who are again determined to “take” the Georgian parliament speaks of Russia as the number one enemy. The most interesting thing is that Shashkin, obviously wanting to obtain the status of the main Georgian patriot of Ukrainian origin, reflects on the fact that Georgia will be able to return Abkhazia and South Ossetia under the “democratic wing”. Reflections of the ex-minister begin with the philosophical assessments of the civil war in Russia and a certain cunning move by the communists, and then logical perturbations lead him to urgently restore recruitment for the army to fight with Russia. In other words, Lieutenant Shashkin (Shashkini) apparently still wants to become a general, and therefore proposes to make the Georgian army mixed: contract-recruiting with a serious focus on reservists.

In order, as one of Mikhail Saakashvili’s supporters expressed this same Dmitry Shashkin, “to repel a possible Russian aggression,” we must now recruit thousands of young people into the Georgian army of 10. It is to call, but not to sign contractual obligations. At the same time, the service for the Georgian recruit Shashkin determines within one year, which, in his opinion, will allow in five years to bring the number of trained reservists to 50 thousand people. If we consider that while Shashkin was at the helm of the Georgian military, an analysis was made of the optimal composition of the Georgian army, which said that Georgia needed at least 100 thousand trained fighters to "solve" the Abkhaz and South Ossetian "issues", then 50 thousand, designated by Shashkin himself, this is half the “norm”. “Norms” for an attempt to now “force Russia to peace”.

In this case, Shashkin's reflections can be considered contradictory to Georgian reality itself. Words about switching to 100% army contract in Georgia were heard for a long time, but only this year, current Defense Minister Irakli Alasania (the one who received the post of defense minister after Shashkin) said that Georgia in 2013 might expect the last draft of youth to the army service. In the meantime, the spring model is in full swing, which is designed to bring to military service by Georgian counterparts the military registration and enlistment offices 1650 of young people aged from 18 to 27.

The draft campaigns in Georgia were carried out before Shashkin came to the post of defense minister, and at the time when he personally led the Georgian Defense Ministry, and after he was dismissed from the government of the country. So what, then, does this same gentleman, who considers himself a connoisseur of how to force Russia to abandon "aggressive plans in the Caucasus", speaks? What prevented and prevents Georgia from preparing its reservists from among those recruits who are sent to the reserve today? In all likelihood, the former minister hints that it is time for Georgia to increase the scale of the draft campaign in his country, and this hint goes also through the financial issue. In particular, Dmitry Shashkin states that contract servicemen cost the Georgian budget 100 million lari a year more than recruits, and this is not only an additional burden on the country's budget, but also (a strange logical chain - author’s comment) - increasing the likelihood of a new Russian intervention in Georgia

In general, Lieutenant Shashkin, together with President Saakashvili, are determined to have some kind of military revenge, or at least a military intimidation of their northern neighbors, that is, you and me, by increasing the number of draftees in the Georgian army.

Remember the words of Churchill. If Russia does not see that Georgia has the power to defend itself, and the support of NATO, it will simply swallow Georgia
- the ex-Minister of Defense finishes his argument on how to make such a country as an “Asian” and “enemy” Russian Federation be afraid of a democratic Georgia.

Of course, such words have delightedly pleased those Georgian gentlemen who still continue to consider Mikhail Saakashvili to be a great and infallible democratic politician of all time, and are confident that the Georgian army will still be able to show Russia to “fucking mother”. Only now people who are confident in the infallibility of Saakashvili in Georgia are becoming less and less every day, and therefore Mr. Shashkin’s reflections today should be perceived only as an element of political struggle within Georgia itself with the goal of gaining additional percentages for the UNM rating before the presidential elections and elections to bodies local governments that are coming to expect Georgia.

But how much Shashkin will raise this rating is a big question, especially on the basis of modern Georgian realities. Here is one of the examples of “national love” for its president and his party on the part of ordinary Georgian citizens. Immediately after representatives of the United National Movement (Mikhail Saakashvili’s party) again spoke out for cultivating ideas to show Russia to the “fucking mother” and denouncing the “ignorance of Ivanishvili’s foreign policy,” the very representatives were awaiting very unpleasant consequences. In particular, Mikhail Saakashvili with several of his supporters decided to dine at the restaurant “La Truffe”, from where he had to carry his legs, as other visitors to this establishment expressed obvious displeasure with such a neighborhood. Saakashvili himself managed to leave with several attendants, but members of the parliamentary faction of the UNM and former members of parliament he headed did not have time. Everything literally flew into them that other La Truffe visitors who had complained found their hands: from glass ashtrays to table knives. As a result, several members of the UNM were injured: MP Vashadze (head injury), MP Sakvarelidze (bruises on his face, a cut wound to his hand). Among the attackers marked one injured.

Saakashvili himself hastened to declare that he did not appear in the restaurant, and that the words that he had fled from the fight and curses from La Truffe are lies of political opponents. Obviously, if it were not for the bruises and wounds of his associates, received by them while visiting the restaurant, and if there were not several witnesses at once, then Saakashvili said that there were no UNM deputies in the restaurant, but they received their wounds in the fight against Asian invaders "on democratic fronts.

In general, this time Saakashvili and his closest associates did not manage to discuss the strategy and tactics of fighting the internal and external enemies of the UNM. And the very information about how some overly ambitious Georgian lieutenants, together with other politicians suffering from the Bonapartist complex of Georgia, are planning to develop the army and wage a political struggle in order to rein in the "Asians", suggests some historical analogies: unhealthy corporals, "subhuman enemies", beer putsches and everything like that ... How such things end up is well known.

Ctrl Enter
Noticed oshЫbku Highlight text and press. Ctrl + Enter
We are
South Ossetia wants to Russia. How will the republic solve the problem of reunification?Russia and Georgia: traps from "well-wishers"
Military Reviewin Yandex News
Military Reviewin Google News
169 comments
Information
Dear reader, to leave comments on the publication, you must to register.