Is China getting ready to take over the world? ("Atlantico", France) 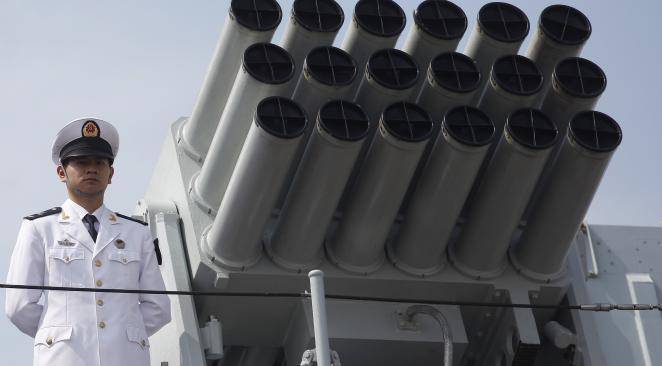 In relations between China and India, there has been a dangerous exacerbation after the invasion of Chinese soldiers into the border zone of Ladakh three weeks ago, in which Beijing has views. Such aggressive behavior confuses, especially against the background of the renewal of the ruling Beijing elite and the rapid increase in the defense budget. What is this evidence of China's hegemonic plans for the future?


Atlantico: In early March, China announced an 10,7% increase in its defense budget, which thus reaches 720,2 billion yuan (88,8 billion euro). We are talking about the world's largest defense expenditures, which are only behind the costs of the United States. In addition, some experts believe that China’s real military spending far exceeds the declared figures. What strategy does Beijing follow if it allocates such funds for defense? What is the reason for the increase in this budget?

Jean-Vincent Brisset: For several years now, various “specialists” have presented clever calculations to prove that Beijing’s official military spending actually needs to be multiplied by two, five, or even eight times. In fact, the main thing is to understand the format in which China sees its armed forces. And what he wants to turn them.

Let's throw away all empty arguments and start from an indisputable fact: China intends to become one of the strongest military powers and get at its disposal funds that will correspond to its economic power. The program adopted in the country until 2030, most likely, is based on the protection of the sovereignty of its territory, as well as the formation of a powerful fleetwho will be able to conduct operations away from its shores. Thus, he needs to be able to block any foreign force from accessing Chinese waters, which, in the perception of leadership, extend almost to the center of the Pacific Ocean. The main enemy from this point of view are American aircraft carriers. The implementation of this scheme requires the air force, which is able to control airspace throughout the zone. The tasks of the land army are limited to protecting the borders and fighting the internal enemy.

Pierre Picard: China is a future great world power and a developed state. In this perspective, it needs a modern army to defend its territory and prevent the formation of anti-Chinese coalitions. In addition, he wants to protect air and sea transport routes, which are inextricably linked with the supply of raw materials, resources and energy. Finally, Beijing intends to play a prominent role in the international arena (which is already evident in the example of sending peacekeepers) and to establish its status as a great power. The increase in defense spending is also associated with the general growth of the Chinese budget, spending on health care, education, science, the work of government departments, etc. The Chinese economy is growing, and it boasts a significant budget surplus.

Beijing is investing heavily in the development of the armed forces. His task and goal is to form a powerful army (fleet, ground forces, air force), which will have the necessary facilities and technologies (ports, training of qualified engineers, submarines, bombers, ballistic missiles with nuclear warheads, cruisers ...). China wants to be able to give a hard answer if necessary.

- As follows from an article published in March by 21 in the Swiss edition of Le Temps, China weaves a real “marine network” all over the world, particularly in Africa, Europe and Asia. It is likely to be part of his military strategy. What could be the consequences of the Chinese presence off the coast of three continents?

Jean-Vincent Brisset: A few decades ago, China began building a variety of offshore facilities, from port facilities to tracking and / or listening centers. Today, this “pearl necklace” extends from the South China Sea to the Gulf of Aden: a few hundred years ago, Admiral Zheng He's expedition followed this route. Although today some observers are trying to present everything as a conquest, he pursued primarily trade objectives. Now to these "pearls" in friendly countries are added a variety of objects (in most cases, these are freight terminals).

China of the 21st century is building strategic plans for the sea. And creates the necessary means for their implementation. For a long time now, his desire for dominion of the sea will be limited to part of the Pacific Ocean and the South China Sea. Thus, its military capabilities outside this zone are small. From a military point of view, they are limited to protecting supply lines and citizens, as we have already seen off the coast of Somalia and Libya, and are not aimed at active actions. As a result, the importance of tracking centers is not so great. Objects in various ports facilitate rare remote operations, but are primarily associated with the country's position as the largest manufacturer of merchant ships and one of their main operators.

- Is China today more concerned about its military might than it was 30 years ago?

Jean-Vincent Brisset: Over the past 30 years, attitudes toward military power in China have undergone significant changes. In 1983, Mao was already dead, including politically. At that moment, Deng Xiaoping officially made the People’s Liberation the last of the “four modernizations”. Since then, much has changed. The current leaders realize that diplomatic influence is largely based on military capabilities. Understanding the situation is directly related to the war in the Persian Gulf, during which it became apparent that the Chinese equipment that was in the possession of Saddam Hussein was completely outdated.

The People’s Liberation Army of the 1990 model of the year for the most part consisted of militias with a small number of relatively professional units. 20 years later, staff was halved, and the budget grew fourfold. However, it still remains a “poor” army, as it spends only 25 000 dollars on a soldier per year (salary, training, uniform and armament). For comparison: in France, this figure is 230 000 dollars per year, and in the US - 450 000 dollars.

- The United States is the strongest world power from an economic and military point of view. Should they be seen as a threat to an increase in the Chinese defense budget?

Jean-Vincent Brisset: The main question now is not how much China is increasing its military budget, but how it intends to take advantage of this abundance of funds that have recently been sent to armies its army. The increase in spending over the past 20 years looks very significant, but you still need to pay attention to the fact that for the most part the funds were spent on improving the living conditions of the military, rather than the technical modernization of the army.

If there is any threat to the United States, it does not come from more than a relative expansion of Chinese military capabilities through the prism of the budget, but from new plans for the Pacific Ocean, which the Peking leadership openly demonstrates. Since the end of World War II, Washington, as an ally of Tokyo and Seoul, has always enjoyed the complete freedom of movement in the waters directly off the coast of mainland China. Now Beijing seeks to challenge this freedom and superiority. At the moment, everything does not go beyond loud statements, but in the future the situation may lead to aggressive actions by pilots or sailors who may not have the necessary technical skills to perform the task effectively. This has already happened in the past, and in no case can one discard the risk of escalation.

- What are the military areas of priority for Beijing?

Jean-Vincent Brisset: Since the beginning of the Mao era, despite all the talk about "paper tigers", priority has been given to nuclear and missile forces. Only they managed to avoid suicidal madness, which resulted in the Great Leap and the Cultural Revolution. For many decades, the land army was at the forefront in conventional armed forces, which served as a graphic confirmation of the definition of “popular”. Moreover, from an administrative point of view, she enjoyed an advantage over other arms. Since then, everything has changed a lot.

The fleet, or rather the entire fleet with the exception of coastal formations, began to isolate itself from the end of the 1970s under the wise guidance of Liu Huakin. At that moment he was in the priority position. This priority yielded concrete results: we are talking about the launching of an aircraft carrier in the media, which so far has not been of particular value in terms of operations, and the much less noticeable but much more important formation of the fleet of modern submarines. The air force is also being upgraded, although they have mostly obsolete equipment at their disposal. Airplanes of the “fifth generation”, around which so many questions have recently arisen, are more likely not even prototypes, but certain demonstration models.

In addition, the People’s Liberation Army made both informational and actual emphasis on the development of asymmetric military capabilities, from the militarization of space to cyber attacks. However, a real demonstration is still required to prove their operational efficiency.

Pierre Picard: The Chinese army receives new technologies and fighter jets, such as the F14, whereas at the beginning of the year the fleet had the first atomic submarine. It is the largest army in the world with 1 personnel in 250 000 people. The military budget for 2015 year will be 238 billion dollars with an increase in 18,5%. It needs to be compared with other powers, such as the USA, and some Asian countries (Japan, Thailand ...), which also boast large defense budgets.

- Does such an emphasis on the development of military power serve China as a way to establish itself in international politics?

Jean-Vincent Brisset: After 40 years of ideological discourse on the "national" character of the Chinese army, the country's leadership realized the need for a new direction to establish the country's military power. The financial and material resources that have been allocated for more than ten years now serve as proof of this desire for power through change. Be that as it may, recent behavior indicates rather a lack of maturity in making decisions regarding this modernization, rather than real confirmation of certain opportunities in the international arena.

Pierre Picard: By 2016, China will become the strongest economic power in the world. Any country has two tasks during development: it wants to avoid external aggression and, thus, feels the need for modern means. The Chinese army has ceased to correspond to the results achieved by the country. Today, Beijing does not feel threatened, but wants to play a prominent role in the international arena, seeks to form an army that would correspond to its status as a world economic power. He needs to carry out cultural and political reforms, as well as to form an adequate defense policy. To win, the Chinese can use several military strategies. Be that as it may, China usually prefers takeovers and negotiations rather than outright conflict.

Pierre Picquart, PhD in geopolitics from the University of Paris-VIII, international expert, specialist in geography and China.

Ctrl Enter
Noticed oshЫbku Highlight text and press. Ctrl + Enter
We are
World MIC - who is in the topStrangulation: the context, conduct and consequences of the American naval blockade of China
Military Reviewin Yandex News
Military Reviewin Google News
107 comments
Information
Dear reader, to leave comments on the publication, you must to register.