Leaving the second grade. Latvian authorities have once again confirmed their anti-Russian character 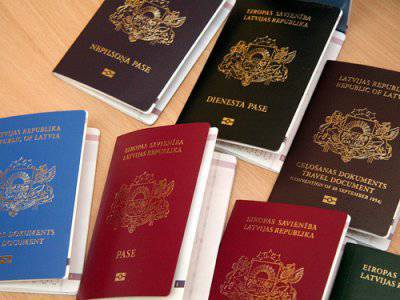 Amendments to the law on citizenship adopted by the Saeima of Latvia, allowed the citizens of this country to keep the Latvian citizenship acceptance of the citizenship of the EU or NATO. Since local authorities are trying to deal with the process of labor migration from the country. However, leaving for Russia this right will continue to be deprived.

As for those who have acquired the citizenship of the States that are not mentioned in the list, in order to preserve the Latvian citizenship they would need permission from the government of the country.

Latvian citizenship will remain as persons who acquired citizenship of other countries as a result of marriage or adoption.

In addition, dual citizenship is allowed and by ethnicity. Latvians and Livs (Finno-Ugric peoples, who lived on the territory of modern Latvia until the coming of the Baltic tribes - approx. LOOK) living abroad will be able to get a Latvian passport, provided knowledge of the language and confirm that their ancestors lived in the territory of Latvia.

The amendments specify that a child at the time of birth is one of the parents was a citizen of Latvia, will automatically receive citizenship, regardless of place of birth. Born in Latvia after August 21 1991, children of non-citizens are recognized Latvian citizens if their permanent place of residence is Latvia, and if before that they never had another nationality or were non-citizens.

The amendments also clarify the procedure for deprivation and restoration of Latvian citizenship, renunciation of citizenship and naturalization. For example, the privileges on examinations will be given to persons who have received basic education in the Latvian language, who have mastered more than half of the basic education program in Latvian, or a complete general secondary or vocational education program, reports Gorod.lv.

The amendments, which have been drafted for almost two years, voted in favor of the 54 deputy, the 27 representatives of the opposition Harmony Center (CA) opposed. The deputies of the CA declared during the five-hour debate that the amendments contribute to segregation and discrimination, since some residents are deemed unworthy of automatic citizenship.

According to the parliamentarians, the law distinguishes between Latvian citizens on first and second grade, imposes additional restrictions on naturalization and sent to the rejection of the principle of the political nation, approved the Constitution. The MPs argued that a citizen of Latvia, who left the UK and wish to take citizenship of the British Crown, will be in a better situation than the one who will go to Russia and wants to become a citizen.

According to the current legislation in the country, when the Latvian citizen takes the citizenship of another country, he shall, within 30 days to inform the Office of Citizenship and Migration Board, which begins the process of weaning him Latvian citizenship. In practice this does not usually do, on many years using two passports.

If somebody declares the owner of two passports, the authorities can begin to select Latvian citizenship in a judicial procedure, but according to the letter of the law, choosing citizenship is the judge’s right, not his duty, and this practice is used selectively. In addition to the actual seizure of the passport for such violators, no punishment is provided.

“For all the time of independence, only about 2000 people were deprived of Latvian citizenship. The pattern is as follows: those who took Russian citizenship are deprived of Latvian immediately, - the Latvian HAC newspaper quotes the words of the deputy from the “Harmony Center” Boris Tsilevich. “Sometimes subpoenas are sent to those who live in Israel.” But the cases started have been dragging on for years and have not yet reached a decision. And I don’t know if the Latvian passport was taken from those who took the citizenship of the United States, Britain, Germany. ”
“14% of the inhabitants of Latvia still do not have citizenship of any state. The situation is at a standstill, and the only way to overcome the inhumane attitude towards non-citizens is to create a representative office and vote in the parliamentary elections for those who are not represented in June. However, we hope that in Latvia there are still forces interested in the consolidation of society. Therefore, the Congress of non-citizens intends to appeal to the President of Latvia Andris Berzins with a request not to proclaim the entry of the Law on Citizenship into force, ”Regnum cites the words of the non-citizen Congress activist Valery Komarov.

It should be noted that in recent years the authorities of Latvia have big problems with the rapidly declining population: many people leave the country to work in the EU, and if possible, get a passport of a country within the euro area, refuse to Latvian citizenship. In total, according to various estimates, from the country over the past twenty years has left about four hundred thousand people - mostly in the West. Only in 2011 year left the country about 30 thousand people.

Apparently, it was precisely in order not to lose these people at least formally, and sent a bill. On Friday, the Bloomberg Businessweek publication released data according to which Latvia ranks sixth in the world in terms of population decline. The study indicates that the birth rate in this country remains one of the lowest in the world, and the death rate exceeds the birth rate. According to these forecasts, over the next few decades, the population of Latvia will decrease by 9,8%, by 2050, only 1,799 million people will live on the territory of the country. Now in Latvia, according to official data, about 2,2 million people live.

Ctrl Enter
Noticed a mistake Highlight text and press. Ctrl + Enter
We are
How Latvia pragmatically and constructively cooperates with RussiaPyrrhic victory of Riga - ...
51 comment
Information
Dear reader, to leave comments on the publication, you must to register.