May 9 capitulated to the Soviet Union not only Germany, but the entire West


Strictly speaking, we, the USSR, could well celebrate Victory Day over fascist Germany on May 2. Because to this day Hitler had already committed suicide, we rejected the proposal of the Reichkhanzler Goebbels who had replaced him to conclude a separate peace, after which he also committed suicide, the Reichstag was taken, on 6 o'clock in the morning 2 in May General of Weedling with three generals passed Berlin front line and surrendered. An hour later, the surrender of the Berlin garrison was signed. As such, the war was over. Then there was the strategic Prague operation and the elimination of certain small centers of resistance of the Wehrmacht. 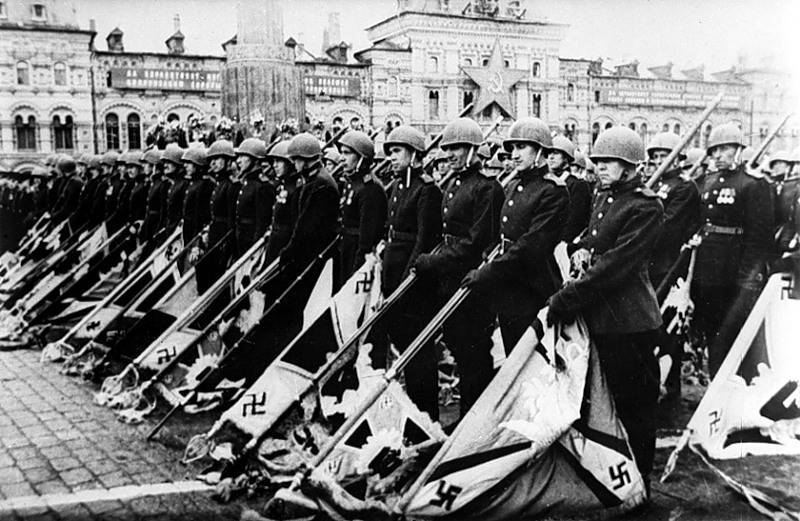 Thus, if we consider the end of the war to be the fall of Berlin and the liquidation of organized resistance, this is May 2. If we consider the end of the war the end of all hostilities, then they lasted until the end of May, even the Prague operation was launched by Soviet troops 9 in May, after the surrender of Germany and ended by May 12. That is, in general, perhaps a different definition of a solemn date. Former allies of the USSR in the West, as we know, celebrate the end of the 8 war in May, when the German command signed a surrender to them without our participation. We could celebrate 2 in May, when the defeat of Germany was really carried out by us.

But we celebrate Victory Day 9 May. And not only because Keitel re-signed the Act of unconditional surrender in our presence on this day. It was only a form. The original meaning was deeper than surrender itself. First of all, what was shown and proved was of importance: the war will be over not when Germany and anyone else wants to stop it, but only when we consider it over.

The USSR had the opportunity to conclude a separate peace with Germany already in the 1944 year, then in the spring of 1945 of the year, 30 of April, when this world offered Goebbels, who for a short time headed the country. Of course, we did not conclude it because we made a commitment to the allies that such peace would not be concluded. But also because they showed the Germans: “You broke the 1939 peace treaty of the year. You are out of trust. There is nothing to talk about with you: no mercy. ”

We not only repelled the aggression of the enemy, we destroyed and punished those who were unable to fulfill their obligations. And they showed everyone, including the then allies: so it will be with everyone. For perjury is not just punishment, but destruction. We made it clear: we will not stop half way. In the eastern political culture, at the junction of the borders of Turkey, Iran and Georgia, boiling oil or molten lead was poured into the mouth for an oath to crime. Stalin remembered that.

But the USSR did not take revenge on Germany at that time — it was he who showed THAT with everyone who ... Perhaps it was this demonstration that played its role later, when the new rivals and opponents of the USSR did not dare to start a war with us, even when it seemed to them that they are stronger.

By 9 May 1945, Stalin no longer thought about the leaders of the Reich - they no longer existed for him. He thought about the allies and warned them about future betrayal. In Karlshorst, he showed the United States and Great Britain and their political elites: “If anything - you will be next here. Look: this is how you will sign your future unconditional surrender in the suburbs taken by storming of London and Washington. And there will be no intermediate solutions, truce, concessions ”.

Likewise, then Nuremberg was needed not so much to hang Goering, as to demonstrate to the leaders of the West: if that happens, we will also hang you.

The world is always built on the taboo of war. The world is strong when it is upsetting to break it, even with an 99-percent confidence in its superiority, the very reminder of this very single last percentage already plunges into a state of panic terror.

After 1945, this happened more than once, and when during the Caribbean crisis the American command assured President Kennedy that he could ensure victory and a reflection of our blow, he asked: “Well, if not?”, And the generals, remembering Karlshorst and Nuremberg, not found what to answer.

9 May in Karlshorst, Stalin showed the great victorious powers their future, waiting for them if they decide to break the accepted rules of the game, and they never decided to break them. Moreover, it was by insisting on the re-signing of the Act of unconditional surrender, he forced (in a hidden form) to capitulate to themselves. He forced them to play by our rules, and argued that the rules would be the ones to which he agreed. They tried to explain that the capitulation, they say, had already been signed, and even the representative of the USSR, General Susloparov, who represented the General Headquarters, was present, and there was no need to hold the ceremony again. But in response they received: "And now - once again squatting." And "squatting" - not only Germany, but all the rest.

That is, May 9 is not only Victory Day over Germany. It is also a day for the Allies to fulfill their obligations to fulfill the established rules of the game. This is the day of their small, internal and not fully advertised, but capitulation to the USSR, which determined all subsequent developments.

In theory, how should the events develop if the allies refused to re-sign the Act? The USSR would still consider Germany as a belligerent and would, after perhaps a brief respite, begin to destroy the units of the Wehrmacht. The latter would go to the Western zone. The USSR would first demand from the allies their destruction, and then - after the natural failure of the "allies" (now - in quotes) to destroy the capitulations, he would simply start to destroy them on the territory occupied by the troops of the United States and England.

Accepting Germany’s surrender only by these countries, without recognizing the USSR, would mean a separate peace, that is, a violation of previous commitments and the cancellation of all others. The Allied armies would have to counteract the movement of Soviet troops to the Atlantic and the destruction of the remnants of the Wehrmacht — that is, to enter the war with the USSR. As far as they were ready for a serious war, their flight to the Ardennes showed. At the same time, they would have guerrilla communist armies of French and Italian communists in the rear, plus at least de Gaulle's army, constantly tattered by Churchill and at that time inclined to union with the USSR. To top it off, the British and American soldiers themselves in that state simply would not understand what the generals want from them. Most likely, the Allied armies would have been partly destroyed, partly expelled from Europe. And this, not to mention such things as the need to fight with Japan, which, with such a development of events, turned out to be an unwitting ally of the USSR — in fact, the United States and Great Britain should have, like only Germany, fought on two fronts. Moreover, the USSR would have fought with them, as with the Wehrmacht, and Japan - not the way they fought with Germany.

Everyone understood everything. And the Allies capitulated after Germany. Although formally the USSR was in a state of war in Germany until January 25 1955, when the Decree of the Supreme Soviet of the USSR to end the war was adopted. Here, by the way, is another date that can be celebrated.

But May 9 was left on May 9 — in the afternoon, when the West recognized that they could only oppose the USSR within the framework of the rules determined by the USSR.

The only question is whether current Russia and its leadership understand these rules.

Ctrl Enter
Noticed oshЫbku Highlight text and press. Ctrl + Enter
We are
About Stalin and KhrushchevValentin Falin: West and Russia in the XX century: connection of times
60 comments
Information
Dear reader, to leave comments on the publication, you must to register.