Finland can sell its shipyards to Russia 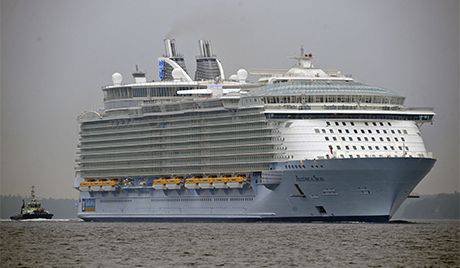 Finnish experts believe that the country's government may sell the Russian United Shipbuilding Corporation of the STX Finland shipyard, on which the world's largest passenger cruise liners were built.


The shipbuilding industry in Finland is on the verge of one of the most serious crises in all of its history. In 2008, the country's main shipbuilding holding, Aker Yards Oy, was purchased by the South Korean corporation STX. The start of cooperation between South Korea and Finland was rosy: in 2009 and 2010, two of the world's largest cruise liners were built at the shipyards in Turku: Oasis of the Seas and Allure of the Seas. However, in 2012, the South Korean STX was on the verge of bankruptcy due to the unsuccessful sale of STX Pan Ocean subsidiary and decided to get rid of part of its European shipyards. All this put Finnish shipyards in Turku and Rauma on the brink of closure.

Chairman of the parliamentary faction of the Social Democratic Party (SDP) in the Finnish parliament Jouni Backman called on the government to take an active role in saving the naval shipyards in order to preserve the industry and the professionals working in it. However, even financial investments in troubled shipyards will not allow Finland to maintain its shipbuilding in the long term. According to experts, in Helsinki must overcome prejudices and seek help from a long-time partner - Russia.

According to the professor, shipbuilding specialist Jorma Taina, Finland can sell its shipyards in Turku and Rauma to the United Shipbuilding Corporation, which already has a joint venture with STX. "Finland and Russia can benefit from the development of Arctic shipping - the first as a manufacturer, the second - as a user," - quotes the expert of The Helsinki Times. The expert noted that for the development of communications along the Northern Sea Route Russia will need dozens of new icebreakers and cargo ships.

Director of the Finnish National Supply Agency Ilkka Kananen (Ilkka Kananen) told reporters that the sale of shipyards in Russia poses no greater threat to the country's economic and national security than selling them to South Korea. Kananen clarified to the Iltalehti publication that some problems may arise with the shipyards of Rauma, where, in particular, military ships are manufactured for the Finnish Navy.

Media outlets note that shipyards in Finland are already loaded with Russian orders. STX’s financial problems have not yet touched the joint Russian-South Korean venture Arctech Helsinki Shipyard, created in 2010, which, in particular, produces modern Arctic supply ships: their hulls are made in Vyborg, and retrofits are carried out in Finland. In April 2013 of the year, an act was signed on the delivery of the second Arctic supply ship "Alexey Chirikov". At the end of April 2013, the Yantar Baltic Shipbuilding Plant sent the diesel-electric icebreaker hull section of the P-70202 project to Finland, and the Russian-Finnish shipbuilding cooperation is not limited to these projects. In total, Finland for the Soviet Union and Russia built more 1500 ships.

According to PortNews IAA, United Shipbuilding Corporation can, without waiting for the resolution of the situation with STX, go to buy the South Korean share (STX Finland Cruise Oy) in a joint venture. Currently, companies own at 50 percent of shares of Arctech. STX Finland Cruise Oy.

Ctrl Enter
Noticed a mistake Highlight text and press. Ctrl + Enter
We are
French STX building Mistral received a large order from the USAThe US Coast Guard received the X-NUMX aircraft HC-13A Ocean Sentry
59 comments
Information
Dear reader, to leave comments on the publication, you must to register.