7 May 2013
70
After the recent speech of the Georgian Prime Minister Bidzina Ivanishvili in PACE, the part of Georgia that continues to adhere to the ideals introduced into Georgian life by Mikhail Saakashvili, has subjected the head of the cabinet to the most severe criticism. What did the supporters of the current Georgian president find inappropriate in the “European” speeches of Ivanishvili?


As it turned out, the Georgian oppositionists (and those who continue to support Saakashvili in Georgia and the party headed by him) were outraged at the alleged Ivanishvili’s attempts to put Georgia before the West as the Russian periphery not claiming great accomplishments and trying to belittle the very role of Georgia in modern world ... And it is precisely such attempts, according to politicians pro-presidential in Georgia, that the head of the Georgian government made in front of democratic Europe. 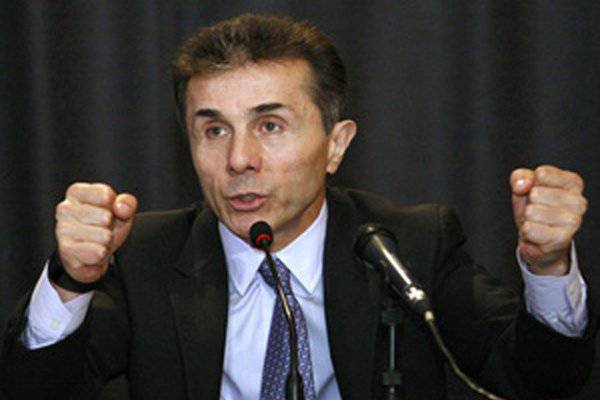 Let us try to analyze the words that Ivanishvili spoke at the PACE and the accusations that came to him from the mouth of the Georgian oppositionists immediately after his speech. The words that stand out more than others in the speech of the head of the Georgian Cabinet of Ministers are devoted to the topic of the status of South Ossetia and Abkhazia, which is painful for Tbilisi. Bidzina Ivanishvili decided once again to remind the Europeans that the entire Georgian authorities were to blame for the attack on the South Ossetian settlements in August of 2008, and that he (Ivanishvili) was worried about the presence of “occupied” territories in Georgia. and his office is going to discuss with the Russian side. In addition, Ivanishvili noted that in Georgia certain political forces (clearly, what forces he had in mind) continue to attempt to hide from the people the truth about the beginning of the 08.08.08 war. Here, in principle, this is the main, let's say, highlights of Ivanishvili's speech, which the Georgian opposition (they and the opposition) turned almost into an attempt of the Georgian government to sell to the Kremlin. The attempt to transform Ivanishvili into a “seller of the national interests of Georgia” consisted of several stages, which, overlapping each other, created a very multi-layered pie.

Layer one:
Ivanishvili is being sold to the Kremlin, based on the decision of the Georgian Olympic Committee to send a delegation of Georgian athletes to the Sochi Olympics. Like, if about 40% of the territory of Georgia today is under "occupation of Russia", then it was necessary to at least boycott the Sochi Olympic Games 2014 of the year, as the countries of the "democratic" camp at the peak of the Cold War did in terms of the Moscow Olympics. Apparently, the Olympic boycott was the last of the personal trump cards in Mikhail Saakashvili’s speckled deck of cards, and therefore it was on this possible Georgian demarche “Olympic Misha” that made his bet. As you can see, some kind of phobia of the Olympics takes place in the fate of the current Georgian president: he gave the order to storm Tskhinval on the eve of the Olympics in Beijing, he wanted to arrange a boycott of the Sochi games. One gets the impression that this mania or phobia is in Mikhail Nikolozovich since childhood, well, or from youth. Maybe, in his time, the Olympian athlete took the girl away ...

Layer two:
Russia allows Georgia to restore the import of Georgian food products into its territory (from fruits and vegetables to honey and mineral water). Aha - the Georgian oppositionists immediately cried out, - just look, this is no accident! Russia, they say, would never have allowed the import of Georgian agricultural products if it were not for Ivanishvili’s decision to surrender South Ossetia (the Tskhinvali region in the Georgian manner) and Abkhazia.

Well, well ... Ivanishvili himself obviously predicted similar statements. However, the replenishment of the Georgian budget at the expense of civilized trade with the Russian Federation for the current Georgian prime minister is much more important than those virtual chimeras in which he is reproached by the opposition. At least, that’s what I’m hoping for.

Layer three:
Talk about a possible judicial investigation into the involvement of President Saakashvili in war crimes in August 2008. Saakashvili himself, for obvious reasons, continues to beat his fist into the chest, claiming that there were no war crimes, but at the same time, Mikhail Nikolozovich deigned to pierce in a substantial way. Not so long ago, the Georgian president announced that he was conducting the entire course of the attack of the Georgian troops on South Ossetia, being in constant communication with Washington (many people assumed this). In other words, Saakashvili wanted to send a kind of “message” to those in Europe who want to interrogate him on the fact of war crimes in Europe, followed by the United States. But in fact, Saakashvili gave the same States a big, sorry, trick, having lit up their “democratic blessing” to the public. Washington is clearly not happy about the fact that Saakashvili mentions the names of American politicians (albeit those who had time to retire) in relation to the events of August 2008. It is interesting whether the Georgian president understands that today he really has no one behind him, besides the European Union flag, which he himself sets and without a reason before holding his press conferences.
If you put all these layers together, it turns out that if someone turned Georgia into someone else's periphery, it was Mikhail Saakashvili himself. It is on this in his speech that the current Prime Minister of Georgia indirectly focuses attention. According to Ivanishvili, in his country the last 8 years there has been an authoritarian regime, which has already had an effect on literally all spheres of the life of the ordinary Georgian population.

For obvious reasons, Saakashvili’s supporters were discouraged by this performance. Even more impressively, the words of Ivanishvili had an effect on the Europeans. Yes - they were familiar with the well-known report of Heidi Tagliavini about the author of a big provocation in August 2008 of the year in South Ossetia, but the news that Saakashvili all this time, in fact, continued to lie to his people, using for this purpose leverage PACE delegates a lasting impression. It is obvious that no matter how now the oppositionists in Georgia tried to accuse Ivanishvili of being “corrupt against the Kremlin,” his words are another blow to the Georgian president, from which (blow) it will not be easy to recover. Indeed, for the European community, the very word “authoritarianism” has a powerful effect ...

Against the background of the fact that his name was put on the list of authoritarian politicians in Europe, Saakashvili received another blow. True, not from his opponent Bidzina Ivanishvili. This time, the activists of the “Club of Young Politicians of Georgia” have already called upon Saakashvili to be tried for belittling the role of the Georgian people in the victory over fascism. According to activists of the organization, the President of Georgia neglects the fact that during the Second World War, about 400 thousands of Georgians died on the fronts, fighting with the forces of Nazi Germany and its allies. Saakashvili is offered to judge for desecration of the memory of the fallen soldiers (we are talking about the demolition of the “Memorial of Glory” in the city of Kutaisi), and for the fact that people were killed during the demolition of the monument.

If all the charges against the Georgian president (currently only verbally by his opponents) are transformed into a real criminal case, after the completion of the presidential term, Mikhail Saakashvili will be able to wage a political struggle in the same way as Mrs. Timoshenko in Ukraine ...

Ctrl Enter
Noticed a mistake Highlight text and press. Ctrl + Enter
We are
Russia and Georgia: close contacts of the third degreeSaakashvili leaked, or Bog for Bidziny
70 comments
Information
Dear reader, to leave comments on the publication, you must to register.