The whole world can wait for the Russian columns to go to the Victory Parade. 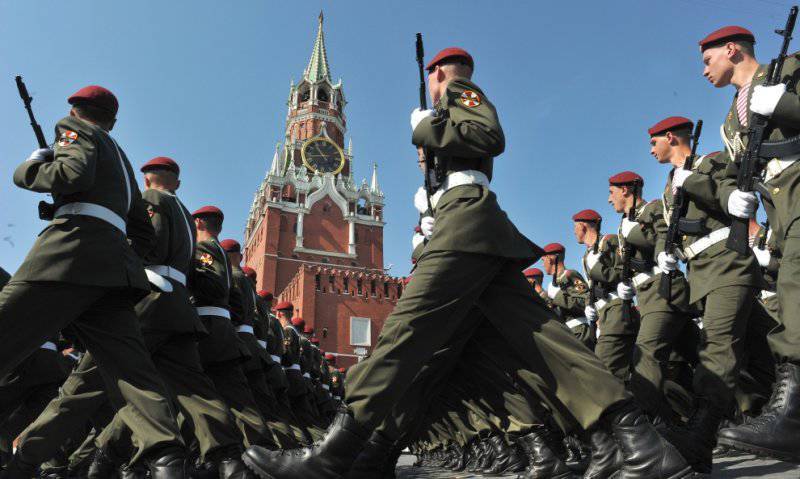 The Victory Parade was attacked by the creative class. Zamglavred "MK" Mujabaev called holding the Parade and its rehearsals fascism and, hiding behind uncle Volodya who fought and "a god I don’t believe in," he shared his hatred for 9 in May when millions of Russian people honor the fallen in a solemn atmosphere. The host of the First Channel Berman, “standing in a deaf traffic jam on the occasion of the parade rehearsal,” also suddenly (and maybe not suddenly) hated the Parade and, hiding behind Isaac’s father, a veteran of the war, though he didn’t come to compare the Parade with fascism, but called it a "rumbling false act." Both he and the other, of course, presented their hatred as caused by concern for the common people and fury against the authorities. Creative people, as you know, are very worried about ordinary citizens in public - they have a hobby. But in their normal life, not on camera, they do not hide their animal hatred of ordinary Russian people, calling us anchovies, Orthodox and cattle.

On the eve of 9 May, someone else from the handshake will probably be noted in the same vein. And this is not surprising, even already familiar. They hate our great holiday and each time they traditionally celebrate it with a portion of hatred for the winners. The great victory for us is a terrible tragedy for them. And here everything is so obvious and frank that I do not even want to discuss. For this, you just need to punish. I heard something similar on the street from anyone else - gave a turnip. No other way. (And don't ask me if there is anti-Semitism here. Ask Berman for this.)

But the problem is different. Unfortunately, many of the false arguments of this glamorous goo that disguises its hatred for the Great Victory under the struggle for justice and against power and officialism are also becoming popular among ordinary citizens of Russia, sincere and patriotic Russian people. Namely: what, they say, Victory Parades and official honoring of veterans in recent years - this is no use to the false authority, which thereby wants to hide the wretchedness of modern life and hide behind the glory of veterans as a fig leaf. I had to repeatedly meet such an opinion with very decent and intelligent people. And I know for sure that the phrase of Berman - “Leave 9 Day May alone. Let people be in silence, alone with those who are dear to them” - many of these will unequivocally agree with her enthusiasm, without noticing which it carries the charge of poison in itself.

Think about these words, read them, recognize their ambiguity, understand their poison. We are told: “leave 9 May alone”, “let it be in silence”, “alone” ... What is really being offered to us? What is this "leave alone 9 May"? Forget about him? Leave it to be devoured by falsifiers? What is this "being in silence"? To get into our corners, how do we spend most holidays and weekdays, and lose one single holiday that truly unites us ?! It makes us united and actually creates us as a people, heals the psychological wounds that, with their poison, kindle Bermans with Zhindaryovs and Mujabaevs in us from the screens of federal channels and the pages of major newspapers. They are disturbed not by officialdom, no, they are disturbed precisely by our very unity these days, the healing of wounds, that holy joy that runs through the goose bumps on everyone who hears "get up a huge country for a mortal battle with a fascist dark force, with a damned horde" .. .

Yes, Victory is really the little, almost the only thing that unites us and glorifies, which returns us faith in ourselves. Yes, the celebration of Victory Day is needed not only by the few veterans, but by the young and humiliated Russian people, offended by the defeat in the Cold War and not seeking revanchist, but by a healthy, constructive way out of the defeatism imposed on us by the comprador elite. Yes, the power, its healthy part, nationally oriented, realizing the brunt of the fall of Russia after 1991, and recognizing that in modern Russia there is little to be proud of, that there is a shortage of unifying meanings and a large fragmentation of society, while watching the healing power of Victory Day , heals the people’s spirit, snatches them out of the state of disintegration and chaos - seeing all this, power creates a triumph of Victory Day, glorifying Victory all the more we move away from the 9 date of May 1945. And this is not a whim of the Kremlin or Vladimir Putin personally, but the movement of power towards the demands of the people, their deep-seated needs. This is not officialdom, but the merging of the aspirations of the people and the government, again so rare and therefore so important.

Yes, Russia needs modern feats and heroes. They are, you just have to talk about them publicly in all media. But this does not negate the need for solemn honors in honor of the Great Victory, the equal of which did not happen until stories of humanity. Nobody says that we must live only in the past. And Russia will surely surprise the world and itself with grandiose accomplishments and discoveries, the greatness of the national spirit. However, now, while this has not happened, it is important to remain united and not disintegrate. It is important not to lose faith in yourself and not turn into a flock of sheep without past and future. It is necessary to overcome the destructive tendencies and the effort of will to survive as the Russian people. That is what the memory of the great deed of our grandfathers, their solemn glorification and loudly expressed gratitude work with.

And finally, the most important thing ... If there is at least one boy in the heart who has looked at the rumbling Russian military equipment or the veteran solemnly and silently walking through Victory Park, if at least in one young soul something has trembled that will then form a person, a warrior, a citizen and a hero, then I am deeply indifferent to the “traffic jams” and temporary inconveniences of car owners in Moscow City. I do not know whether it is available to Berman, how far the scales themselves are not comparable in this seeming contradiction: the heroic millennium of the native land, reflected in the sparkling armor of the Topol missile system, and the market vanity of short-term interests, expressed in endless traffic jams. The whole world can wait until the Russian columns go to the Victory Parade.

Victory Parade, Victory Day - this is also a great educational lesson when you feel the beat of life of a huge country and a great history. The lesson that we have the happiness to receive every year in the morning of May 9. And may this morning the loud "Urrra!" drown the gnashing of moral monsters who hate our victory. This holiday is not for us.

Ctrl Enter
Noticed a mistake Highlight text and press. Ctrl + Enter
We are
About Stalin and KhrushchevThe importance of the Victory Parade in Russia is being questioned
183 comments
Information
Dear reader, to leave comments on the publication, you must to register.