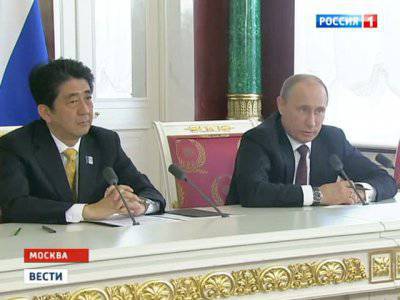 The leaders of Russia and Japan are ready to speed up negotiations to resolve the problem of a peace treaty. This is one of the results of the meeting between Vladimir Putin and Japanese Prime Minister Shinzo Abe. For the first time in the last 10 years, the head of the Japanese government flew to Moscow on an official visit. And the Russian president accepted the proposal to make a return visit.


The official visits of the head of the Japanese government to Russia have not been for the last 10 years. Geographic proximity and mutual sympathy of the peoples of the two countries throughout the post-war history remain hostage to a territorial dispute.

Wreaths to the Tomb of the Unknown Soldier from the Japanese delegation are more than a symbol: the past should not retard development. They want to sign a peace treaty in both countries equally.

"We managed to reach an agreement today that we will resume these contacts in this area. This, of course, does not mean that everything will be solved tomorrow. The problem has not been solved for 67-68 years. But, in any case, we will continue to work on this is a difficult but important question for both countries, "said Russian President Vladimir Putin.

"The situation when 67 years after the end of the war between Japan and Russia did not conclude a peace treaty is abnormal. But this time we were able to agree on the need to resume these negotiations. And at the same time speed up this process. But this is really a difficult question "And there is no such magic wand in the world that could solve such a problem in one fell swoop," said Prime Minister of Japan Shinzo Abe, in turn.

The fate of the South Kuriles for the Japanese is the main condition for the future treaty. That is why the journalist of the Tokyo TV company asks the president: Does Russia understand the irritation that any activity in his four South Kuril Islands causes in his country? The question Ogata-san reads from the sheet.

"I looked, you honestly read this question on paper. I would ask you to convey to those who dictated it to you, the following: we got this problem, we didn't create it, we got it from the past, a hundred years ago. And we are sincere we want to solve it on acceptable terms for both parties. If you want to help us, then it is possible, you need to create conditions of friendly relations with each other and create an atmosphere of trust. And if you want to prevent, which is also possible, you can continue to ask tough direct questions on which sun where you will receive the same tough direct answers. But how else? In this case, I want to say that the same citizens of the Russian Federation live in these territories, like all our other citizens who live anywhere. We must think about them, must think about their level of life ", - the president of Russia answered.

120 businessmen that Shinzo Abe brought with him to Moscow is a plan for Russian-Japanese cooperation in the near future.

"The composition of Japanese businessmen who participated in the negotiations in an expanded format, says that Japanese business has a very large, very specific interest in developing cooperation with us," said Russian Foreign Minister Sergey Lavrov.

Energy is the basis of Russian-Japanese business ties. The shutdown of nuclear reactors after the Fukushima accident plunged Japan into a brutal energy crisis. And Russian oil and gas are needed there now more than ever.

27 years ago, the father of Japanese Prime Minister Shintaro Abe planted two hundred sakura trees in the Moscow Botanical Garden during a visit to the Soviet Union. Since then, it invariably blooms in early May. According to Shinzo Abe, the will of his father, which he intends to fulfill, is to ensure that Russian-Japanese relations finally flourish.

Rich resources and high technology. This is what two neighboring countries are together - Russia and Japan. An unresolved dispute length of almost 70 years does not allow neighbors to get the most from each other. This visit by the Japanese Prime Minister may be a turning point. At least, Shinzo Abe himself admits that it was not by chance that he flew to Moscow in the spring.