Foreign agents. The head of Udmurtia saw a conspiracy in the strike of doctors

President of Udmurtia, Alexander Volkov, lashed out at Izhevsk doctors, whose “Italian strike” attracted the attention of the Russian Ministry of Health. According to Volkov, the FSB must find out who is behind the women, in whose actions the official saw the machinations of the enemies of the Russian statehood.


Izhevsk doctors began an “Italian strike in early April. They wanted to demonstrate to officials the impossibility of working according to the rules and regulations introduced in January 2013. Doctors supported profile trade union. Doctors spent their share for three weeks, all this time they went to work and fulfilled their duties according to official instructions. But an adequate response from the government of Udmurtia was never received. On the contrary, they were subjected to administrative pressure from officials. From 18 to 22, April, three Izhevsk children's doctors, in desperation, went to extreme measures - they declared a hunger strike.

After that, they were already heard by the federal authorities, the women were invited to Moscow to meet with federal officials and received unexpected support from the Ministry of Health. The Ministry of Health of the Russian Federation has begun to correct the situation. After promising to deal with all controversial issues, the doctors agreed to stop the hunger strike.

Pediatricians Izhevsk well done. Opened an abscess. NMP, Ministry of Health, Duma and Channel One are on their side. The hunger strike is over. Together they drank tomato juice.

Leonid Roshal, director of the Institute of Emergency Pediatric Surgery and Traumatology, on Twitter

In Izhevsk, the first results of the strike are already visible. In one of the city’s hospitals, for example, the head physician met one of the demands of the trade union. At the same time, inspections initiated by the Ministry of Health of Russia revealed a large number of violations, which federal authorities obliged the authorities of Udmurtia to eliminate before May 1.

After the meeting in Moscow there were very positive emotions, but when they came home, the administration and officials began to look for inconsistencies everywhere. And after our Udmurt president called us a scumbag and suggested we plow - somehow we slowed down a bit, although, apparently, we hit the wasp's nest well ... We would like, nevertheless, not verbal support, but some kind of action. After all, eight women have not shifted this system ... As long as we have time to relax and think over the situation. But we are not going to give up, 1 may go to the demonstration.

Tatyana Mazaeva, Chairman of the Action Union, for SmartNews 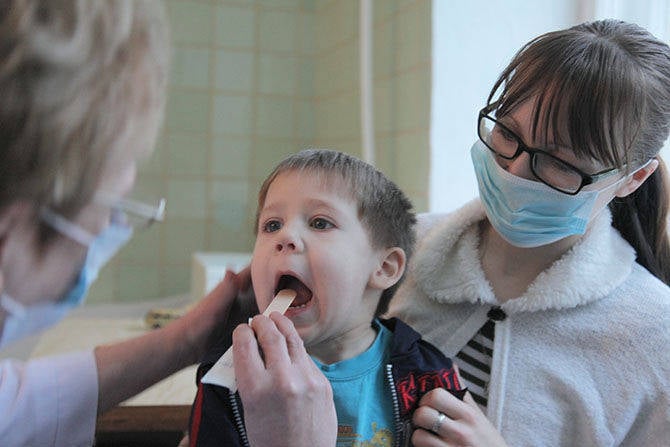 According to the striking doctors, the support of the authoritative medical public activist Leonid Roshal and the officials of the Ministry of Health of the Russian Federation turned out to be important. This inspires Izhevsk doctors certain confidence that in the future they will not be subject to sanctions at work.
It would seem that the doctors have achieved results, and the issue has been practically resolved, even at the federal level. However, a new round of conflict followed after the sensational speech of the President of Udmurtia.

... What is happening is wrong, something that swells at the level of Russia is wrong. This is harm to the Russian state. And the FSB should not keep quiet as they do it, but tell who is behind these three women. And the chief federal inspector, to whom we have addressed, should not walk around with him, as he does, and call the minister along with this shvonder, but bring order in order, as a government official. And we have bred antimonia here all over the country. Therefore, it has already happened, we passed - a spark of flame, so do not blow it up. The country has just gotten on its feet, a stable situation. The president needs to thank you for the decisions that he made on the second day after taking office. And we are trying on every occasion to linger and ask questions. Get up in line and let's work, not jerk! Therefore, what is happening is wrong. And we will not remove the minister for the sake of these scumbags. I'm sorry, colleagues.

Alexander Volkov, President of the UR, speech at the session of the State Council of the UR

According to Volkov, the salary of health workers from 1 January 2013, the year has grown, and the issue is inflated completely from scratch. The President believes that activist doctors should deal with the FSB and understand "who is behind them." The President of Udmurtia was not even afraid to assume that foreign money was involved, which was allocated to destabilize the situation in the country.

The public, of course, was skeptical about such a response. According to the majority, the president brushes aside the issue, dumping responsibility on non-existent and incomprehensible finances from abroad. However, Volkov’s annoyance is quite understandable: regional budgets have to level the social consequences of the health care reform carried out by the federal center. In which it is likely that there will not be enough money.

And all these scumbags, globals, Schwonders for this money find people to beat them, and all around are rushing. What is this? What are we going to finish? Is little 17 of the year? Are we not full of 91? Do we need more? Let's get some more pampering! Let me show you the salary of teachers and doctors from 91 year to the next session. Today the president announced that the teacher’s salary is at the level of the average for the region. When was it, colleagues? When? Well I can show it all on the chart. When was it? Never been like this! The doctor will have a salary two times higher than the teacher’s, than any state employee? And at the same time you are talking about the quality of medical services. We need not to lisp around and run, and fidget, and ask this doctor: "Why is the quality of services at such a salary?"

Alexander Volkov, President of the UR, at the session of the State Council of the UR

To date, the press service of the Udmurt leader is trying to level the situation. According to their data, the head of the region instructed to consider all the comments of the Ministry of Health of the Russian Federation concerning the payroll violations of health workers who caused protests in Izhevsk.

In 90, I was familiar with a good Doctor (with a capital letter), rescued disinterestedly, and I helped him disinterestedly ... maybe this is Soviet philosophy, but not the worst ... When five years ago I saw him on Gazelle payload - say that I was in shock - to say nothing. For me, this is the collapse of medicine, if a qualified doctor, a specialist, goes to the PI, so that, as he said, “it is necessary to feed the family” ... And pediatricians are great, I support the inadequate reaction of the pres ....... and only brings its end closer, my inevitable.

The strike was planned back in December 2012, but was postponed by doctors due to the flu epidemic. Last year, the salary of doctors was approximately 16 – 17 thousand rubles, and after the reform it fell to 7 – 8 thousand.
The “Italian strike” of doctors lasts for the fourth week, the hunger strike lasted for four days. April 21 in 23 cities of the country held rallies in support of Izhevsk doctors. As part of the “Italian strike,” doctors began to take a standard number of patients, giving everyone at least 15 minutes. Prior to that, the reception lasted about 3 minutes. Payment of overtime work of physicians is about 30 rubles per day.

Ctrl Enter
Noticed oshЫbku Highlight text and press. Ctrl + Enter
We are
What you didn't want to know about EnglandWhat is happening on “Izhmash.” On the appeal of Mikhail Kalashnikov to Vladimir Putin
64 comments
Information
Dear reader, to leave comments on the publication, you must to register.