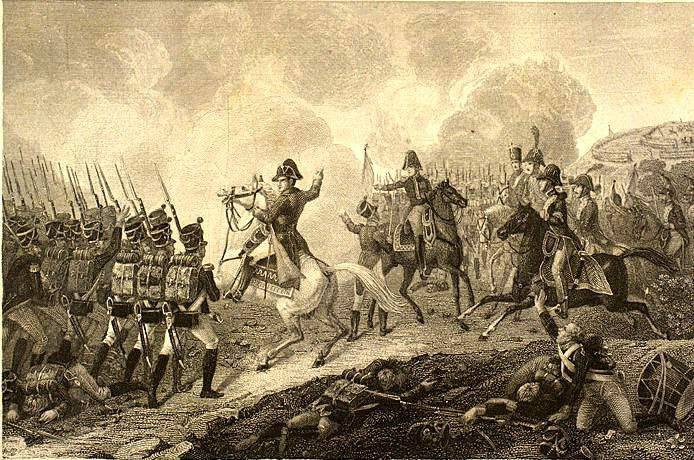 2 May 1813 during the War of the Sixth Coalition, the first general battle took place between the French army led by Napoleon and the united Russian-Prussian army under the command of the Russian General Wittgenstein. The battle took place near the town of Lutzen, which was located in 20 km south-west of Leipzig in the western part of Saxony. In German historiography, it is known as the Battle of Grossgörschen (German: Schlacht bei Großgörschen) by the name of the settlement at the battlefield.

By 28 on April 1813, when the great Russian commander Mikhail Kutuzov passed away, the Russian army cleared Prussia from the French and entered the Elbe towards the German states, which continued to be Napoleon’s allies. February 28 in Kalisz signed a treaty of alliance between Russia and Prussia. 27 March 1813, the Prussian monarch declared war on France. The main Russian army 27 March occupied Dresden, 3 April - Leipzig. The shortest way from Prussia to the French capital went through the territory of Saxony.

Wittgenstein's separate 4 March building entered Berlin. March 17 to the troops of Wittgenstein joined the Prussian corps of York. Convinced that there was no threat to Berlin, Wittgenstein moved his troops southward to Leipzig to join the army of Kutuzov.

At the same time, Russian-Prussian troops besieged enemy fortresses along the Vistula and Oder lines. A detachment under the command of Lieutenant-General Leviz (then Prince of Württemberg) blocked Danzig at the mouth of the Vistula (the fortress capitulated at the end of the 1813 year); Barclay de Tolly's corps besieged Thorn fortress on the middle Vistula, it surrendered 6 (18) April; the corps of Major General Paskevich blocked Modlin, a fortress on the right bank of the Vistula at the confluence of the Narew River near Warsaw (Modlin capitulated 1813 of the year in November); Zamoć Fortress, which was located on a plateau in 100 km east of the Vistula, was besieged by a detachment of Lieutenant General Radt (the fortress surrendered in November). Along the line of the Oder, they besieged: the fortress of Spandau, which was located in 15 km west of Berlin at the mouth of the river Spree, it capitulated on April 21; Stettin at the mouth of the Oder was besieged by the Prussian corps of General Tauentsin, and then by Major-General Plets (surrendered in November 1813 of the year); Kustrin and Glogau capitulated in January 1814.

After the death of Kutuzov, the Russian army was led by Peter Christian Wittgenstein, who distinguished himself during the Patriotic War of 1812 with victories near Klyastitsy and Polotsk. He led the Russian troops to the north and was proclaimed the "savior of St. Petersburg." In the course of the Foreign Campaign that had begun, under the command of Wittgenstein, the troops acted more actively than the Main Army of Kutuzov, as the winner of Napoleon expressed doubts about the need to continue the offensive and the war with France.

Forces of opponents and their location

Wittgenstein moved 90-th. Russian-Prussian army (with 656 guns) for the Elbe to Leipzig, advanced units were advanced to the river Saale. In mid-April 1813, the French emperor led the newly formed army (about 130 thousand bayonets) and at the end of the month moved it to the aid of 60-thousand. Army Eugene Beauharnais, who tried to stop the enemy on the Elbe. It should be noted that the new army of Napoleon, although much larger than the Russian-Prussian troops in numbers (the Russian-Prussian command was forced to spray considerable forces on the siege and blockade of fortresses), was inferior in the field of training soldiers, lack of cavalry (only 8 thousand Sabers) and artillery (350 guns). Having mobilized in France, Napoleon was able to restore the army, but in three months it was impossible to recreate the cavalry and artillery lost in Russia.

Due to the lack of a sufficient number of cavalry, the French emperor could not conduct deep reconnaissance and had vague ideas about the location of the enemy army, not knowing about the concentration of Russian-Prussian forces south of Leipzig. By May 1, French troops stretched for 60 km from Jena to Leipzig.

In this situation, the Russian-Prussian command could hope to win. The suddenness of the attack, the speed and decisiveness of the actions could lead to victory over part of the enemy army. Evasion of battle with Napoleon’s army, retreat to the right bank of the Elbe was threatened by the deterioration of the military-strategic situation, by the loss of influence on the German states. General Wittgenstein decided to take advantage of the stretching of the enemy troops and strike at Napoleon’s right-flank corps while they were on the march, beating them separately. The lack of cavalry among the French reduced the risk of failure, in case of defeat, the enemy could not organize prosecution. Wittgenstein had 54 thousand Russian soldiers and 38 thousand Prussian soldiers, about 92 thousand people in total, of which about 20 thousand were cavalry. To attack against Napoleon's corps, the commander-in-chief of the Russian and Prussian forces could use 73 thousand people, the rest of them guarded the flanks and places of the crossings.

May 1 on the road to Leipzig near Weissenfels was a collision of a Russian detachment from the corps of General Wintzingerode with the French. In this battle, Napoleon’s cavalry commander, Marshal Jean-Baptiste Bessier, was killed. The French pushed aside advanced Russian troops and occupied Lutzen, where Napoleon’s main apartment was located.

The May 2 battle began when General Lauriston's French forward corps tied a shootout with the Prussian Kleist squad that occupied Leipzig. Napoleon, having received news of the fighting, hurried with the guard to the battlefield.

Around noon, unexpectedly for the French, the Prussian corps of Blucher attacked the corps of Marshal Ney (35 thousand soldiers), who covered the right flank of the French army moving towards Leipzig from the side of Pegau. The battle began in the rear of the main Napoleon, in 5 km south of Lützen, east of the main road to Leipzig. The enemy was caught off guard. Napoleon immediately began to send troops, including the forces of Beauburna, to help Her. Those troops that were closest to Leipzig were sent to the left flank of Ney, the rear corps to the right flank.

Before the arrival of the corps of Marmont, Bertrand and Macdonald, the Russian-Prussian troops had a numerical advantage, they were opposed by a total of about 50 thousand French. The Allies forces drove the enemy from the villages of Grossgörschen, Kleinershen, Kaye. The fighting was hampered by rugged terrain, with many ponds and canals. The decisive success of the forces of Wittgenstein failed.

Reinforcements began to approach 5, and Russian-Prussian troops went over to the 7 hours of the evening to defend. Numerical superiority was now on the side of Napoleon's troops. He concentrated the fire of several dozen guns against the center of the Allies in the area of ​​the village of Kaye, and with the attack of the guard threw the Russian-Prussian troops back to their original positions. By nightfall, the overall situation worsened. Wittgenstein's troops were swept from both flanks. Kleist's Prussian detachment was driven out of Leipzig, which created a threat to bypass the Russian-Prussian army from the north and the loss of communications with the Elbe. General Wittgenstein asked the monarchs, who were with the army, permission to retreat. 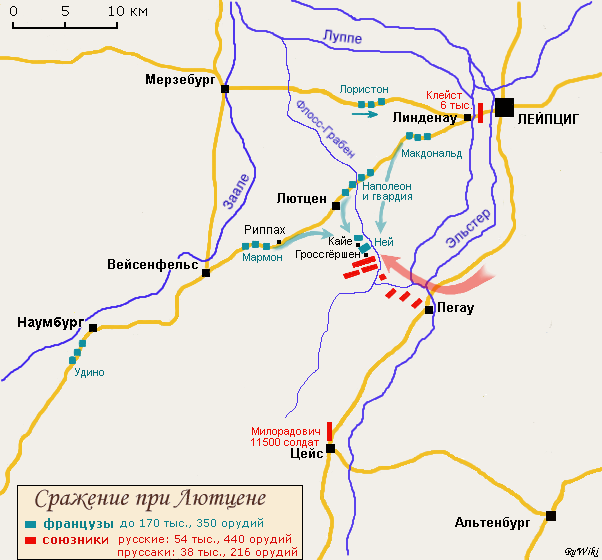 “Among the reasons that led to the defeat of the Allied Army, the researchers point out the fact that Wittgenstein’s initiative was constrained by the presence of the Russian emperor and the Prussian king, they had to report every step of the army, ask their consent. In the army there was no unity of command, which seriously affected the conduct of hostilities. Much time was spent deploying troops, coordinating actions, instead of attacking an enemy that had been caught off guard. There was no Suvorov "speed and onslaught." Wittgenstein had to confront the most illustrious Napoleon, and leading not only the Russian troops, but also the Prussian units, not knowing about their level of preparedness, stamina, not having full power in the army. We must not forget about the numerical superiority of the enemy army. In addition, Wittgenstein was criticized for not using the Miloradovich corps, located at Tseyts, and thus weakened the strike power of the Allied army.

- The battle at Lutzen did not reveal a clear winner, as the Russian-Prussian troops did not suffer a crushing defeat and left their positions themselves. Napoleon could not win a decisive victory and organize the pursuit of Russian-Prussian troops, not having significant cavalry forces. In addition, Napoleon’s troops suffered greater losses than Allied forces. Therefore, it is not surprising that in Russia Lutzen was originally presented as a victory over Napoleon. General Wittgenstein was awarded the highest order of St. Andrew the First-Called by the Russian emperor, and the Prussian military commander Blücher, who distinguished himself in this battle, was awarded the Order of St. George 2 degree.

- 3 May Allied forces retreated. Prussian detachment under the control of Bülow on Meissen to close the Berlin direction. The main Russian-Prussian forces, along with artillery and carts, went to Dresden. Covered the army corps Miloradovich. 8 May was abandoned and Dresden. Saxony was again ruled by Napoleon. 12 May Russian-Prussian troops took up a position under Bautzen. It was decided here to give a new battle to the French army.

Ctrl Enter
Noticed a mistake Highlight text and press. Ctrl + Enter
We are
"With such a general as Kutuzov, Russia can be calm"Battle of Bautsen 20-21 May 1813 of the year
13 comments
Information
Dear reader, to leave comments on the publication, you must to register.